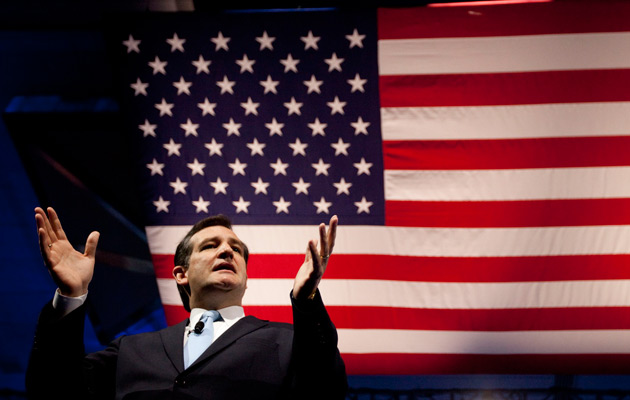 "Every time Ted Cruz has gone on TV, what I've heard him say is: 'I very much want to kill you, Jon Schwarz.'"Eric Draper/ZUMAPress

Huh. That looks weird. Has that always looked like that?

I don’t spend a lot of time looking at the back of my calves. I’m sure you don’t spend a lot looking at yours. Kind of like the dark side of the moon, they’re on the dark side of your body. And they’re not interesting enough to make a special effort. What do the backs of our calves do all day long? Who knows, they could be plotting to overthrow the government and we’d never notice.

But for some reason a few months ago I did look at the back of my right calf. And I noticed that a mole I’d had there for my whole life looked slightly different. Or did it? I wasn’t sure. In fact, I wasn’t sure I’d looked at this mole since the Clinton administration. But whatever it used to look like, now it looked sort of…like it was splitting in half. Like one side was making a break for it and heading around my leg toward my shin.

Or maybe not. Maybe what I’d thought was one mole had always been two overlapping moles and I hadn’t ever noticed. Maybe?

Maybe I should go to a dermatologist.

What I’d always heard about waiting for results from medical tests is that you want a nurse or receptionist to call you. You definitely don’t want to hear from the doctor themselves. Yet I was so totally unworried that when I heard the doctor’s voice, that never crossed my mind. To the degree I thought anything I thought: Wow, this guy is such a caring physician that he makes a point of calling patients to tell them that they’re perfectly fine.

I wouldn’t have gone to the dermatologist if I didn’t have health insurance. The only reason I went to have my life saved is because it cost me zero dollars.

That was not why he was calling. He was calling to tell me that my weird-looking mole was malignant melanoma—i.e., the type of skin cancer that kills you. Unless it’s caught at the very beginning, which mine was. Then (if you’re lucky like me) they send you to have a big chunk cut out of the site of the melanoma to make sure they got it all, and you look like you got bitten by a shark, and then the receptionist calls to say there were no malignant cells in the chunk, and doctors tell you: You really don’t have anything to worry about, just be sure to use sunscreen from now on.

And that’s the thing about melanoma, which you probably don’t know unless you’ve spent many bleary nights reading every single website on the internet that mentions it. It’s not just that it’s the most dangerous of the three kinds of skin cancer, causing 80 percent of skin cancer deaths—it’s that if it escapes from your skin into your lymph nodes it’s sometimes more dangerous than many other types of cancer. For instance, the survival rates for stage II melanoma are the same or worse than for stage III breast cancer.

But on the other hand, survival rates in its earliest forms are very close to 100 percent. If ever there were a cancer where early detection makes all the difference, it’s melanoma. So if I hadn’t gone to have my weird-looking mole examined, eventually one day a clump of malignant cells would have migrated from my skin to elsewhere in my body and quietly begun multiplying. Would that have taken six months, three years, five years? There’s no way to know. But then I would have been visiting melanomaprognosis.org and looking at charts with survival numbers like 67 percent, or 49 percent, or 34 percent. The difference between that and being (KNOCK ON WOOD) totally cancer-free was a 10-minute procedure in an office building on a Monday.

That’s why it’s so important to understand how unworried I was. I wasn’t $400 worth of worried, or $100 worth of worried, or even $20 worth. I wouldn’t have gone to the dermatologist if I didn’t have health insurance. I probably wouldn’t have gone if I had insurance but it had a big deductible, or even any real co-pay. The only reason I went to have my life saved is because it cost me zero dollars.

And the reason it cost me nothing is because I have America’s best health insurance via my job with Dog Eat Dog Films, Michael Moore’s production company. He didn’t just make an entire documentary, SiCKO, about our disastrous health care system, he puts his money where his movie is. My coverage has no deductible, and most doctor’s visits have no co-pay. (The dental coverage is great too—I had three wisdom teeth removed for a total cost to me of $242.) I’ve never had insurance like this before in my life and probably never will again unless I move to Ontario.

So you can understand why I’ve been closely following the GOP’s attempts to defund Obamacare. I’m suddenly much more interested in everything about health care policy, in the same way you’re suddenly much more interested in the safety instructions in the seat back in front of you when the pilot announces you’re ditching in Lake Superior. And every time Ted Cruz has gone on TV, what I’ve heard him say is: “I very much want to kill you, Jon Schwarz.”

That’s because Obamacare requires insurance companies for the first time to cover everyone, regardless of any preexisting conditions. There’s no more disqualifying condition than cancer; without Obamacare, I would now almost certainly be uninsurable if someday in the future I try to get insurance on the individual market. And we know what happens to people without health insurance in the United States: They die.

This doesn’t mean that I don’t understand Obamacare’s grievous flaws. But they’re not flaws of going too far, they’re flaws of not going nearly far enough. Almost every day now I think about the tens of thousands of Americans walking around with undiagnosed, early melanomas who could be cured in 10 minutes. Some of them think something might be wrong but aren’t doing anything because they have no insurance or bad insurance. Is it you, 28-year-old woman in jeggings who’s clearly spent too much time at a tanning salon? Or maybe it’s you, middle-aged dad I saw carting around three kids at the grocery store while getting instructions on your cell phone on what brand of spaghetti to buy. Or you, the 60-year-old cashier at the Indian restaurant who gave me the extra order that someone else never picked up. These thoughts about this unnecessary suffering torment me. If that sounds overwrought to you, I’m guessing you’ve never looked at a pathology report with your name on it that says “diagnosis: malignant.”

And the awful truth is that while Obamacare will save some of those people, it won’t save them all—because although it will help nearly everyone get some kind of insurance, it won’t help everyone get good insurance, the kind that saved me. Some of them will look at their strange asymmetric mole and their $2,000 deductible and won’t be $2,100 worth of worried until it’s too late.

Ted Cruz and other conservatives have a phrase they like to use about health care, which is that Americans need more “skin in the game.” This means that the real problem with our system is that regular people don’t have to pay enough—that we “buy” health care like we do clothes or cars, and we’ve been getting too much because insurance makes it seem so cheap. But as someone with some nonmetaphorical skin in the game, I can tell you this isn’t just wrong, it couldn’t possibly be wronger. People don’t want to go to the doctor. They don’t go get pointless chemotherapy instead of going to Six Flags because chemotherapy and Six Flags are both the same amount of fun but chemotherapy’s cheaper. I didn’t have to pay anything to see a doctor, and because of that it cost the health care system about $5,000 to treat me. If I’d delayed because I had to pay, it easily could have ended up costing the system $500,000 worth of interferon, CT scans, and radioimmunotherapy, plus the additional downside of me being dead. Multiply that by millions of people and you’ll understand why the right’s crusade against health insurance is more than just evil and cruel, it’s evil, cruel and incredibly stupid.

So we don’t have to just beat Ted Cruz so hard he flees back to Alberta. We have to get rid of the parts of Obamacare that may help the private insurance industry keep squeezing us like an anaconda. And we have to keep and improve the good parts, so the Affordable Care Act is just the first step to the only system that’s ever worked anywhere on earth: universal, high-quality health insurance and health care for everyone. And while we’re working on this, seriously—please please use lots of sunscreen and don’t skimp on dermatologist appointments.

This article originally ran on MichaelMoore.com.