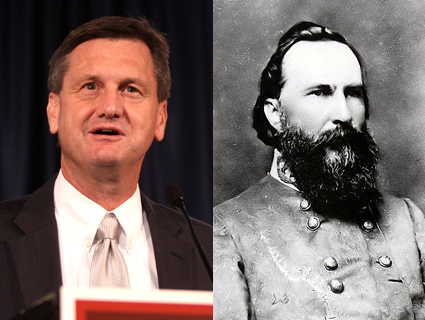 South Carolina state Sen. Tom Davis is a leading light of his state’s Republican party, and a favorite among tea party conservatives who hope he reconsiders his decision not to mount a primary challenge to Sen. Lindsey Graham (R-S.C.). He also has some interesting thoughts about the Civil War.

A tipster passes along this photo, from Davis’ Facebook page this week (it has since been taken down), featuring a man standing next to a barrier he had moved to the side of the road at Gettysburg National Battlefield Park, allowing vehicles to access the site of the 1863 battle. Davis’ comment was brief: “If only Longstreet had employed this flanking maneuver.” 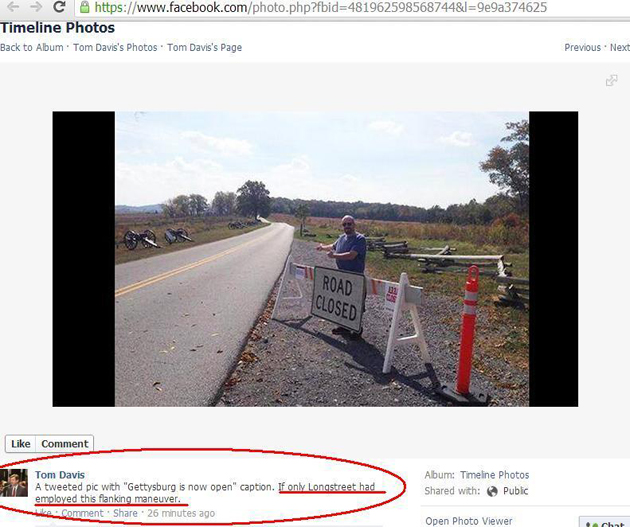 Davis’ comment refers to confederate General James Longstreet, one of Robert E. Lee’s top generals at Gettysburg, who on the second day of the battle was slow to act on a directive to attack the Union’s vulnerable left flank. The theory is that if Longstreet had employed the flanking maneuver, he could have rolled through the Union lines and scored a crushing victory that would have turned the tide of the war in favor of the dysfunctional breakaway republic united by a doctrine of white supremacy. If only!