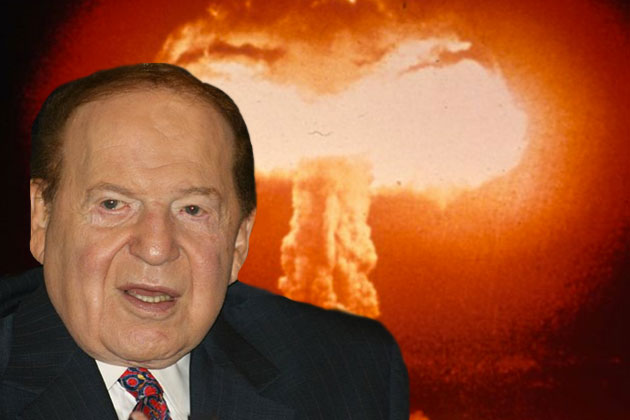 “You pick up your cell phone, and you call somewhere in Nebraska and you say, ‘OK, let it go,'” he said to a group of Yeshiva University students. “So there’s an atomic weapon, goes over, ballistic missiles, the middle of the desert, that doesn’t hurt a soul. Maybe a couple of rattlesnakes, and scorpions, or whatever. And then you say, ‘See! The next one is in the middle of Tehran.'”

If this strikes you as a catastrophically stupid idea, you’ve got company. “The unprovoked use of nuclear weapons for the first time in 60 years against another country would utterly destroy the legitimacy of U.S.-led efforts to curtail Iran’s nuclear program,” Daryl Kimball, the executive director of the Arms Control Association, writes in an email.

But let’s play Sheldon’s Advocate—if the US were to bomb the Iranian desert, would anyone be hurt, save for some very unlucky scorpions?

Most definitely, says Kennette Benedict, the executive director of the Bulletin of the Atomic Scientists. “I suspect some people do live in or near the desert regions he describes,” she writes in an email—assuming that Adelson meant Iran’s Kariv region. But even if the blast didn’t cause any initial deaths, she says, it would create a radioactive plume that would last for months. “As radioactive material settled, premature cancer deaths would certainly be expected. The biggest immediate impact—and one that would be felt even beyond Iran—would be the electromagnetic impulse taking out all electrical and communication service in Iran,” and other countries in the region—perhaps as far away as Israel.

“The desert also has vegetation which would be set afire by even one ‘small’ nuclear bomb blast,” Benedict continues. “Smoke from the burning shrubs would be waft across the desert and into surrounding towns. [It’s] perhaps not the enormous damage to populations that targeting a city would bring, but disruptive of agriculture in surround[ing] areas beyond the ‘desert.’ [A] radioactive plume would likely travel eastward, with effects on people depending on how old or young they are.”

Kimball agrees. “Any above-ground detonation of a nuclear bomb would spread dangerous radioactive fallout over populated areas, as downwinders in Nevada and Utah know all too well from the days of U.S. atmospheric testing near Adelson’s home base of Las Vegas,” he added. And for what? he asks. “Iran—and the rest of the world for that matter—have no doubt the United States and Israel have nuclear weapons and are aware of their tremendous destructive power. Detonating a U.S. nuclear weapon anywhere in Iran would be an illegal act of war that would only help convince ordinary Iranians—and certainly their leaders—that Iran should have nuclear weapons to deter further attacks.”

Benedict adds that any US strike on Iran might be met with retaliation from a certain nuclear-capable Iranian ally. “While our average-sized nuclear weapons have about 250-300 kiloton yields (the Nagasaki and Hiroshima bombs [were] about 15-20 kiloton yields), Russia’s average single weapons have about a 400 kiloton yield,” she writes. “Bigger, with a larger blast and fire radius, larger radioactive plume, and damage to communications—and who knows where they’d choose to ‘retaliate.'”

So there you have it. Nuking Iran’s desert: bad for rattlesnakes, bad for humanity.