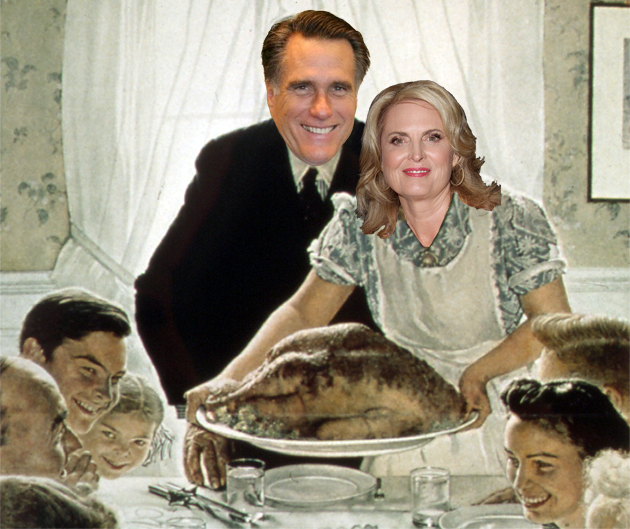 Are you cooking for Thanksgiving this year? Looking for some culinary inspiration? Me, too. This year, I decided to take come cues from Ann Romney and her famously large political clan. She has just published a new cookbook, the Romney Family Table, which promises home-cooked recipes and “favorite traditions” from the family that didn’t quite make the White House. I thought I’d fire up the Mother Jones test kitchen to see if any of the Romney family recipes might deserve a place at the table this year.

Many of the recipes in the Romney cookbook rely heavily on pre-packaged or canned ingredients or come with shortcut tips along the lines of whipping up some Stove Top stuffing as a side. (There’s literally recipe for a chocolate mint Bundt cake whose first ingredient is a box of Duncan Hines devil’s food cake mix.) Most of the other recipes are extremely simple, such as “Boiled New Potatoes,” a dish whose instructions take up about one line: “Boil until fork tender, about 30 minutes. Season with butter and salt.”

There are homey recipes for quick breads baked in empty fruit cans (a staple of my childhood in Utah), multiple variations on Rice Krispie treats, and more Jell-O mold confections. Some of the offerings might fare well at a holiday meal with kids, such as “Cheesy Noodles,” which is nothing but egg noodles with butter, cream, and grated cheese poured on top. But you probably didn’t need a recipe for that (or for boiled potatoes, for that matter).

So I decided to kick off the testing with the more distinctive favorites of the Men Who Would Not Be President. First came “Mitt’s Meatloaf Cakes”, a dish that earned some notoriety on the campaign trail last year after the GOP presidential nominee disclosed that he ate them every year for his birthday, along with mashed potatoes and cooked carrots. 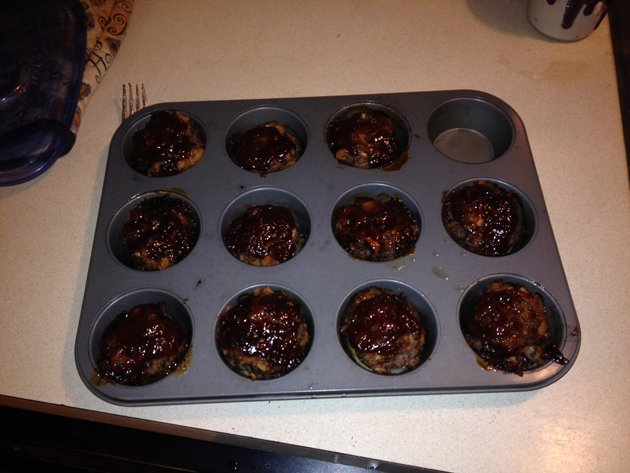 This dish is unfussy, downhome cooking, though a bit hard to place on the culinary spectrum. The New York Times wrote up the meatloaf cakes in March last year as “Mitt Romney’s Blue-Collar Birthday Meal.” One selling point about them: They’re easy to make. I whipped up a batch in just a few minutes. One drawback: They require the use of six mini loaf pans, which I don’t have.  I ended up making meatloaf “cupcakes” instead.

Once formed into cakes, the meatloaf is topped with a mixture of ketchup, brown sugar, and dry mustard. The topping came out sticky-sweet and contrasted sharply with the sour meat mixture, which contains a half-cup of lemon juice. Testers were dubious from the outset, and not just the vegetarians. The results were mixed. My husband, who thinks Mitt Romney would make the world’s greatest next-door neighbor, was disappointed he couldn’t choke them down. But the cakes seemed to grow on people.

“Horrifying on the first bite,” reported Mother Jones staffer Patrick Caldwell. “But once I was mentally prepared, it was delicious.” Tim Murphy, by far the most enthusiastic taster in MoJo‘s Washington bureau, declared that the cakes “look and sound like something Guy Fieri would reject as just a little too much, but are in fact quite delicious–and caloric.” Verdict: Meatloaf cakes would definitely be a good dish for any family to fight over at a holiday meal.

After Mitt’s meatloaf, I tried “Pistachio Pudding Salad”, a recipe favored by George Romney, Mitt’s father, the former Michigan governor and failed presidential candidate. George Romney apparently had quite a sweet tooth. The salad calls for a box of instant pistachio pudding, an exotic ingredient I feared I’d have trouble locating. I worried for naught: It was right there on the Jell-O shelf at my local Safeway. 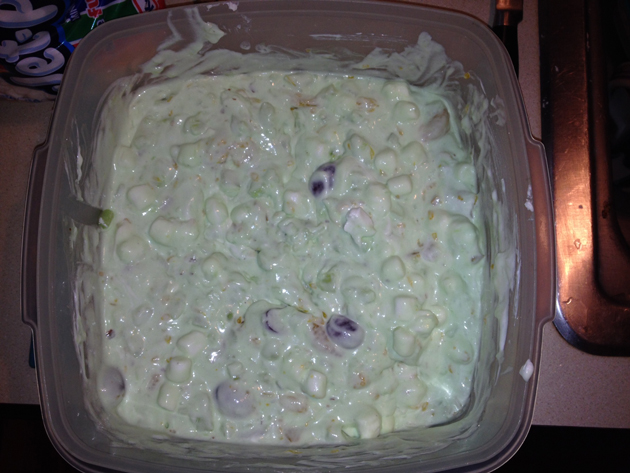 “Salad” really isn’t the right word for George’s favorite. Along with the pudding mix, the recipe calls for a can of crushed pineapple, a can of mandarin oranges, grapes, coconut, a cup of mini-marshmallows and an eight-ounce tub of Cool Whip. As I mixed all these ingredients, my children stood by and watched in horror as I added the pistachio pudding mix and the whole vat turned a ghastly, unnatural shade of green. The texture alone was enough to scare off the kids, who observed that it looked “just like throw-up.”

Likewise, my DC-bureau testers lost their nerve when presented with the green goo. Some claimed nut allergies (a likely story!). Fortunately, Caldwell, like me, hails from the Jell-O belt and was undeterred. His verdict: “Fairly standard Jell-O salad if you ignore the fact that it looks like it was cooked in nuclear waste. The marshmallows were a nice touch, though.” George Romney may have loved this salad, but given the overwhelmingly negative reaction in the office, I can’t recommend it for the Thanksgiving table.

For the final test recipe, I chose “Hot Tomato Bouillon”, a soup that Ann offers as a good dish for entertaining, in large part because it can be quintupled to serve 50. (Quintupling seems a handy skill when you’ve got 23 grandchildren.) In the cookbook, she notes that she once served this at an open house where the Boston Globe’s food editor sampled it and “loved it.” With that sort of billing, the soup seemed like a natural for my tasters. 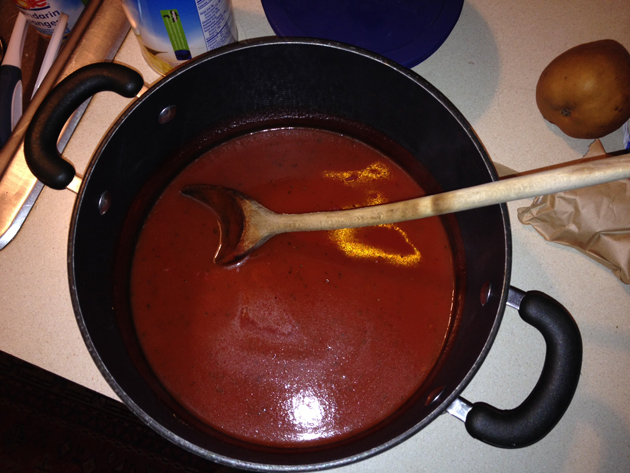 The soup is essentially boiled, canned tomato juice with a sprinkling of dry oregano (and an optional splash of sherry for the non-Mormons). I still managed to screw it up. The recipe calls for four beef bouillon cubes. The ones I bought turned out to be twice the size of the ones Ann uses, so I accidentally added about 9,000 milligrams of sodium to the pot. Needless to say, the result was mostly inedible. I didn’t bother trying to coax my co-workers into sampling this one. The eye-watering amount of salt aside, I still had to think that when the Globe’s food editor raved about the soup to Ann, she was just being nice. But as it turns out, Sheryl Julian, the food editor at the Globe, confirms that she did indeed love the soup. So I’d say the soup could definitely make it on to a holiday menu.

Overall, the Romney Family Table turned out to be a bit of a bust in terms of livening up my Thanksgiving holiday this year. The problem is that there’s little in it I didn’t already have in my own family cookbook. I grew up in Utah (non-Mormon), so the Romneys are my people, from a culinary standpoint. I already have Jell-O salad in the rotation (ours is cranberry and is served on a wedge of iceberg lettuce with a dollop of mayo on top.) Much of Ann Romney’s repertoire would be right at home in the Junior League of Ogden cookbook, a project for which I was forced to serve as an unwitting taste-tester as a child. Ann’s canned-ingredient heavy chili recipe is almost identical to the one my entire family has been cooking for the last 30 years.

The Romney Family Table hails from the tradition of community cookbooks that women have been cobbling together for centuries as a way of handing down family recipes or, as with the Junior League, for community fundraising efforts. (Indeed, the proceeds from Ann’s book will go to charity.) They’re always a product of their times and rarely about high-concept cooking. I found one in my late mother-in-law’s collection a few years ago, from Schenectady, New York, circa 1974. Like some of Ann’s, every cake recipe in the book called for Duncan Hines cake mix as the first ingredient, all the vegetables were frozen, and Cheez Whiz was a common theme. As a cookbook, it was mostly useless, but as an artifact of another time, when parents played bridge, drank cocktails and fed children Cheez Whiz, it was priceless.

Like the best of community or family cookbooks, the Romney Family Table is full of this sort of nostalgia-inducing food that is made not because it’s fabulous but because it invokes warm, childhood memories and inside family jokes. Family cookbooks are utterly endearing—to your own family—but mostly embarrassing when shown to anyone else. That’s true for the Romney cookbook. They published this foodie-offending fare for larger consumption, and people buying the New York Times bestseller are likely to be disappointed if they’re looking for a food revelation.

What readers will find, though, is a fairly interesting window into life of the would-be first family. The cooking in it might be low-brow, but the book offers more support for New York magazine writer Dan Amira’s contention that the Romneys are “objectively, America’s best family.”

There are so many kids! And they all look so happy! In the Romney Family Table, Ann describes a typical Christmas Eve in which some of the 23 Romney grandchildren put on an entire Christmas pageant at home. Photos show the whole gang dressed in bathrobes as shepherds and wise men. The dog (not Seamus) is covered in cotton balls to play the lamb. There are other photos of both George and Mitt Romney hanging out with grandchildren and working an old-fashioned, hand-cranked ice cream maker. The cookbook pages are graced with images of Romney family talent shows, with babies lined up on a makeshift stage next to upturned pots, wooden spoon/drumsticks in hand. It all looks so creative and fun and incredibly organized and happy.

Ann acknowledges in the book that her family life has not always been as blissful as it looks in the cookbook. She describes some real misery in raising five boys mostly by herself, with little but supportive platitudes from Mitt. And she admits that all the kids fight and that some of them can’t hang with Mitt’s Christmas Eve reading of A Christmas Carol excerpts. But even so, Ann’s rendering of Romney family deserves a spot on the holiday coffee table if only to spur us all on to be better families, if not better cooks.