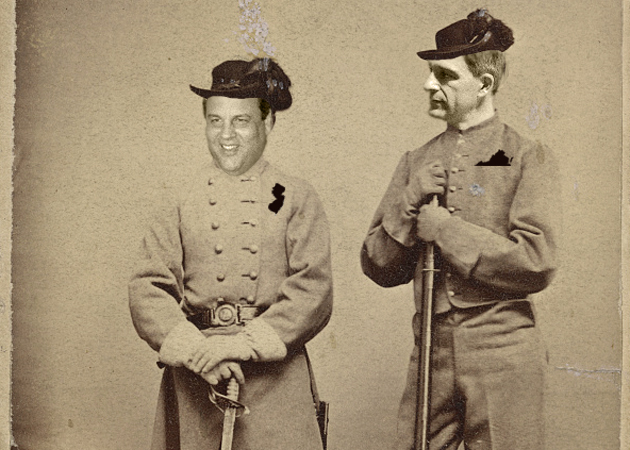 With Gov. Chris Christie’s massive reelection victory in the blue territory of New Jersey and Ken Cuccinelli’s embarrassing defeat to Terry McAuliffe in the governor’s race in often-red (in the off-years) Virginia, reasonable Republicans scored points against the party’s renegades in the GOP’s ongoing civil war. This internal battle has intensified since the government shutdown, as die-hards led by Sen. Ted Cruz (R-Texas) have insisted the Republican Party’s fortunes are tied to no-compromise conservatism and ideological confrontation, and establishment Rs have decried their party’s Kamikaze Club and contended the GOP must maintain a lifeline to the center and political reality.

Yet in the two big statewide races of Election Day 2013, the results favored those who don’t fancy hostage-taking. (In Alabama, a tea party birther was defeated by a Chamber of Commerce-backed candidate in a Republican primary for a vacant House seat.) Christie, who drew the ire of hardcore conservatives by refusing to treat President Barack Obama as the devil incarnate, coasted to an easy triumph and earned the right to declare this message: Republican success in the real world comes when GOP candidates emphasize pragmatic governing, not ideological crusades. And Cuccinelli, a fierce social conservative with plenty of name recognition as the current state attorney general, was the poster boy for those right-wingers who assert that their party must stick to the far-right lane to win elections and transform the nation. His defeat at the hands of a Democrat tainted by assorted money-and-politics scandals—in an election shaped by the government shutdown and Cuccinelli’s hard-right views on abortion, birth control, and divorce—will be joyously cited by those who cry bunk in the face of Cruzism. But the non-Cruzers ought to resist the urge to celebrate too much, for the Republican Party may have just experienced its own version of the Battle of Chancellorsville.

This critical Civil War engagement transpired in the spring of 1863 in Spotsylvania County, Virginia. General Robert E. Lee led a Southern force against Major Gen. Joseph Hooker’s Army of the Potomac, which had twice as many soldiers as Lee’s army. Lee mounted a bold attack and pulled off a decisive win for the South. It was perhaps his greatest feat of the war. But there was a downside (in addition to the friendly-fire battlefield death of Stonewall Jackson): Lee saw his army’s success at Chancellorsville as proof his forces could do almost anything. He moved his troops north to mount an offensive campaign in Maryland and Pennsylvania. The next major battle came at Gettysburg.

The GOP establishment’s victory Tuesday will not settle anything for sparring Republicans. It may give pundits and establishment-oriented GOP operatives (Karl Rove, this means you) ammo for op-eds, sound bites, and behind-closed-doors strategy sessions. But it doesn’t change a basic reality: The tea party wing of the party still has plenty of energy and anger. More important, many of the tea partiers are beyond persuasion. The final numbers in New Jersey and Virginia will not affect their view of the world. Some may try to argue, despite the folly of doing so, that Cuccinelli was not sufficiently conservative. But many Rs who adhere to the scorched-earth approach are driven more by belief than analysis. Consider Cruz, in the aftermath of the shutdown, declaring the episode a success and exclaiming that the American people have risen up against Obamacare. He was utterly unencumbered by the polls, which do not register a popular revolt against the Affordable Care Act. (Exit polls in Virginia and New Jersey showed voters evenly split on Obamacare.)

Cruz and his adherents are propelled by ideology—or perhaps a political theology. And they have money and resources. The Senate Conservatives Fund and HeritageAction (guided by former Sen. Jim DeMint) are well-funded allies. (An Obama adviser recently pointed out a key point in assessing Cruz’s political vitality: He has a gigantic email list.) Rush Limbaugh, their chief cheerleader, has the biggest bully pulpit on the right. And several credible Republican 2016 wannabes in addition to Cruz—such as Sens. Rand Paul of Kentucky and Marco Rubio of Florida—will continue to fan the flames of tea party resentment, as they court the most influential constituency in the early presidential primaries. The internal dynamics of the Republican Party create much incentive for egging on the tea party set. (See John Boehner.) This crowd will not be bowed because RINO Christie earned a second term.

Though the self-proclaimed adults of the GOP have asserted themselves more forcefully following the shutdown—Senate Minority Leader Mitch McConnell (R-Ky.) vowed there would not be another shutdown, and Sen. Orrin Hatch dumped on the Heritage Foundation—they have not publicly demonstrated a willingness to fight as fiercely as the tea partiers. At the end of the shutdown, Boehner had not truly tamed the tea party tail wagging his party. It seemed that he and his extremists had just been worn down for the moment, with members of the hostage-taking caucus in the House applauding Boehner for sticking it out with them for as long as he did. None of the bomb throwers paid a price for the shutdown or near-default, especially not Cruz. He learned this lesson: Extremism sells. And you could practically smell Rand Paul’s and Marco Rubio’s envy.

The Republican Party is now as divided as any party has been in modern times. The Democratic Party underwent a painful division during the Vietnam War. The conflict between peaceniks and hawks led to an actual riot in 1968 (with the help of the Chicago police). But that split was over one policy disagreement, though quite a large one, not a question of fundamental purpose. The GOP of today is beset by foundational issues—and more than one fracture.

For decades, GOPers have described the Republican national coalition as a stool of three legs: national security Republicans, business Republicans, and socially conservative Republicans. At the moment, all three legs have serious cracks. The McCain hawks shudder in horror at Rand Paul’s neo-isolationism. Corporate Rs cannot believe that tea partiers place a desire to kill the government ahead of economic stability. And religious-right GOPers fret that libertarian and demographics-minded Republican strategists want to throttle back on the cultural warfare that alienates independent, young, moderate, and suburban voters.

Each of the three legs are wobbly. Still, most of the passion in Republican circles these days is with the coalition of disrupters and cultural traditionalists. As Lee learned at Chancellorsville, it’s not just the numbers of troops you have; it’s how you use them. And no one on the right is making better use of field soldiers than Cruz, Limbaugh, DeMint, and the rest. The elections of New Jersey and Virginia will not alter the overall dynamics of the Republican civil war. And the GOP’s Gettysburg has yet to come. That battle may ensue in 2014 or wait until 2016. But for now—certainly not after the skirmishes in New Jersey and Virginia—there’s no sign that such a conflagration will be avoided.