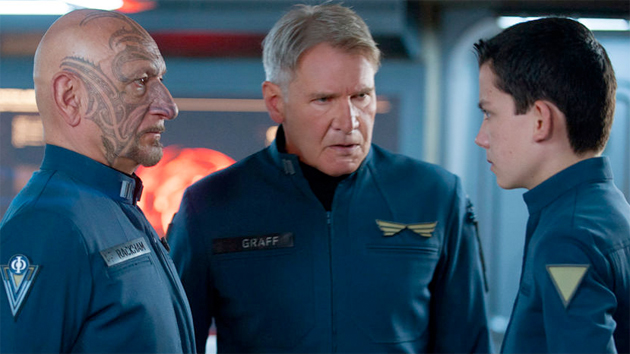 Ender’s Game has a lot going for it. It’s a special-effects-pumped thrill ride based on a beloved 1985 science fiction novel. It’s well-cast and well-acted. It’s a crowd pleaser that pays just enough lip service to philosophical questions on desensitization and the morality of war. And the critical reception has been pretty good.

Studio executives must be thrilled about all of this, especially since Ender’s Game demands a sequel, if the $110-million film makes enough dough to warrant it. But there’s something that Summit Entertainment, Lionsgate, and the filmmakers involved definitely are not thrilled about, and that’s the politics of Orson Scott Card, the source material’s author. For one thing, the 62-year-old American author hates gay people. Like a lot. We could spend all day going over the various ways in which Card hates gay people, gay sex, gay nuptials, gay everything. But the only thing you need to know about his views on the LGBT community is that he has openly supported the overthrow of the US government if it legalized same-sex marriage. Card’s general political paranoia is also something to behold: Obama is a totalitarian despot who, in his bid for lifelong rule, could soon recruit mobs of unemployed urban youths to serve as his leftist “brown shirts.”

So, yeah, Card is an absolute, mean-spirited nut. He certainly isn’t the first celebrity to be one, and he isn’t even the only controversial name that’s attached to a movie that’s in theaters today. Card wasn’t creatively involved in the film adaptation, beyond having a one-line, voice-only cameo as a pilot.

Still, Card’s bigotry has lately burdened the marketing of his product, and led to well-publicized calls for a boycott of the film. In February, a GLAAD spokesman told the Hollywood Reporter that “anti-gay activists like Card can’t expect to spread the same hateful and dangerous rhetoric they once did without it negatively impacting how the public views them.” The spokesman added: “He might still want the buying public to financially support his creative endeavors, but the public is responding with an affirmative ‘no.'” GLAAD, however, did not join or endorse a boycott of the movie, and the organization did not respond to Mother Jones‘ request for comment on this point. The folks leading the push for a boycott—a campaign that has received a good deal of coverage in outlets such as the Guardian, the New York Times, the Los Angeles Times, and so on—are members of the New York-based Geeks OUT, a group that promotes the “queer geek community.” Their “Skip Ender’s Game” effort picked up enough steam to trigger a bitter response from Card in July.

“When we ask directly if people would like to see a few dollars of their ticket fund anti-gay hate, they seem to get the idea. The studio and filmmakers are doing what businesspeople do.”

“We’ve received our share of disgusting hate mail, too,” Jono Jarrett, a Geeks OUT board member, writes in an email to Mother Jones. “Many people seem not to understand how a boycott works or the basic tenets of capitalism…Nobody has to let their money support a bigot’s extreme agenda or raise his platform. When we ask directly if people would like to see a few dollars of their ticket fund anti-gay hate, they seem to get the idea. The studio and filmmakers are doing what businesspeople do when they’ve already written a huge check and have millions on the line.” To be clear, Card isn’t getting a cut of the box-office haul, according to TheWrap. He was paid in a decade-old deal that includes no backend, but the film’s publicity has indeed increased book sales.

And Jarrett is correct in suggesting that people with money riding on the movie’s success are visibly worried. Even before “Skip Ender’s Game” made headlines, studio executives were well aware that Card would be a liability. “Orson’s politics are not reflective of the moviemakers,” an anonymous source close to the film told THR in February. “We’re adapting a work, not a person. The work will stand on its own.”

And in subsequent months, the well-oiled Hollywood PR machine kicked into high gear. Lionsgate declared themselves “proud longtime supporters of the LGBT community” and promised to host an Ender’s Game “benefit premiere.” On the red carpet earlier this week, screenwriter/director Gavin Hood also distanced himself from Card’s beliefs. “The book is a fantastic book full of wonderful themes like compassion and tolerance and I am distressed by Orson’s position on gay marriage,” Hood said. “I hold the opposite view. But I loved the book…Would I prefer to be doing a movie without controversy? Yes, but I’m not in the least distressed that we are having this conversation…It’s just odd that our film, which is all about tolerance, has to be used to counter the author.” Producer Roberto Orci pled ignorance, claiming he didn’t even know about Card’s extreme social conservatism when he signed on for the project. ”It didn’t occur to me to do background checks on anybody,” Orci told Entertainment Weekly. ”If it’s on the screen, then I think it’s fair game.”

Harrison Ford, who plays the war-hungry Colonel Hyrum Graff, also weighed in. (Ford is a staunch liberal who has, for instance, been critical of hawkish neoconservatism and lax gun laws in the US.) “I think none of Mr. Card’s concerns regarding the issues of gay marriage are part of the thematics of this film,” Ford told reporters in July. “He has written something that I think is of value to us all concerning moral responsibility. I think his views outside of those that we deal with in this film are not an issue for me to deal with and something I have really no opinion on. I am aware of his statements admitting that the question of gay marriage is a battle that he lost and he admits that he lost it. I think we all know that we’ve all won. That humanity has won. And I think that’s the end of the story.” (Ford gave a similar reply to GQ magazine in October.)

At least a few people think there’s more to the story. As of Thursday, the “Skip Ender’s Game” petition has more than 11,000 signatures.

What do you think? Will you be joining this boycott? Make your case in the comments below.