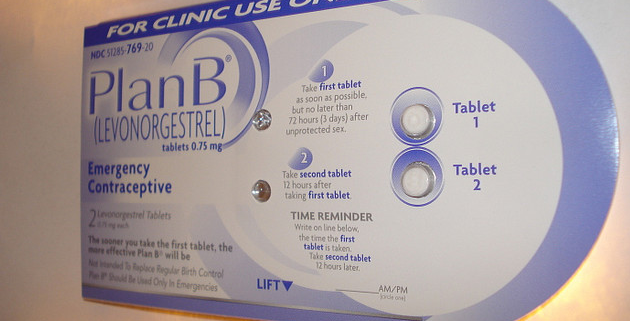 Monday morning, Mother Jones reported that the European manufacturer of an emergency contraceptive pill identical to Plan B, also known as the morning-after pill, will warn women that the drug is completely ineffective in women weighing more than 176 pounds, and begins to lose effectiveness in women weighing more than 165 pounds. HRA Pharma, which makes the European drug, Norlevo, asked European regulators for permission to change the drug’s labeling after reviewing its own clinical data and scientific research from 2011 which showed emergency contraceptives are prone to fail in women with higher body mass indexes.

“The FDA is currently reviewing the available and related scientific information on this issue, including the publication upon which the Norlevo labeling change was based,” FDA spokeswoman Erica Jefferson writes in an email. “The agency will then determine what, if any, labeling changes to approved emergency contraceptives are warranted.”

Jefferson declined to say when the FDA began its review. If FDA officials feel they have sufficient data to justify a change to product information, the FDA can order companies to update their labels. Jefferson adds that US drug companies have a legal obligation to alert the FDA if new information makes their existing labeling inaccurate.

The FDA requires generic drugmakers to display the same product information that appears on brand-name drugs, if a brand name exists. Since Plan B One-Step is a brand name, the makers of My Way and Next Choice One Dose cannot update their packaging information unless the FDA acts or Teva Pharmaceutical Industries, the exclusive manufacturer of Plan B One-Step, changes its labels first.

However, any manufacturer can submit information for the FDA to review, and Jefferson adds that the FDA can also request information from Teva “as appropriate.”

When the FDA approved Plan B for sale in the US, it did not assess the effects of weight on the drug.

An HRA Pharma spokeswoman told Mother Jones that the company did its own review of clinical data before changing Norlevo’s labels. Anna Glasier, the professor of obstetrics and gynecology at the University of Edinburgh who wrote the study that prompted HRA Pharma’s review, told CNN that based on her research alone, she would still recommend these pills for heavier women.

Neither Actavis nor Gavis, which manufacture generic versions of Plan B One-Step, replied to questions about changing their labels last week. A Teva spokeswoman declined to comment. Norlevo is not approved for sale in the US.

“When we became aware that there appeared to be an impact on efficacy (linked to weight), we felt it was our ethical duty as a drug manufacturer to report it and be transparent,” Erin Gainer, the CEO of HRA Pharma, told New York Daily News on Monday.