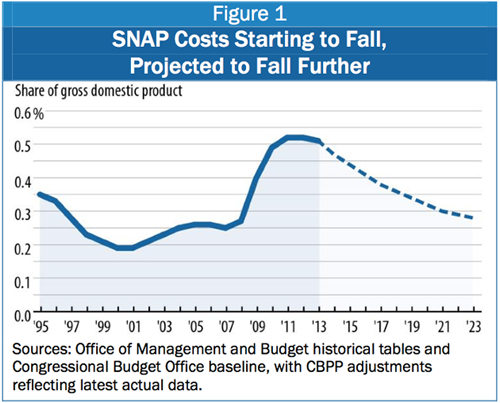 As Congress debates renewing the farm bill, Republicans have been pressing for big cuts to the food stamp budget as part of the negotiations. House GOP leaders want to slash as much as $40 billion from the Supplemental Nutrition Assistance Program (SNAP) over the next decade, a cut that would affect nearly four million low-income people. Rep. Steve Southerland (R-Fla.), a former funeral director and current House pointman in the negotiations, has called the “explosion of food stamps in this country” the “defining moral issue of our time,” and he’s set out to “reform” the program by imposing work requirements on recipients.

Southerland would specifically push states to end SNAP benefits for poor families in areas of high unemployment. The premise behind his reform proposals is that the food stamp program is “growing into oblivion.” But a new study from the Center on Budget and Policy Priorities shows that in fact, enrollment in the food program, which hit a record during the recession, has already started to plateau and is projected to decline about five percent next year even if Congress does absolutely nothing.

Part of that decline is the result of a seven-percent, across-the-board cut that went into effect November 1 with the expiration of about $5 billion in funding increases from the 2009 stimulus bill. But even without that cut, caseloads have been stabilizing since 2011 and remained flat this year. Now, the Congressional Budget Office projects that, barring any major fiscal disasters, the food stamp budget is on track to return to 1995 levels in about five years, falling about two to five percent a year as the economy recovers. All this even if Congress doesn’t do anything to “reform” a program that kept nearly five million people (2.2 million of them children) out of poverty last year and is responsible for broad economic and public health gains.

If Southerland gets his way, though, instead of letting a recovering economy pare down food stamp spending, Congress will throw 1.7 million of the nation’s poorest people out of the program—people whose annual income is less than $2,500 a year—and incentivize the states to drop even more so they can use the savings on other things, like tax cuts for the wealthy. It’s times like these when doing nothing seems like a good idea.