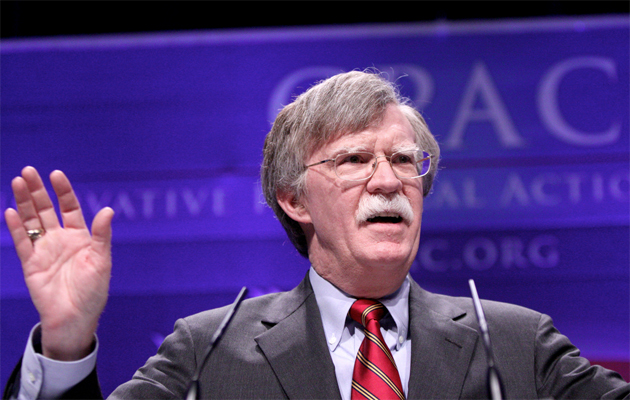 It’s refreshing when a neoconservative says what he really wants. Hours after the Obama administration announced an interim agreement with Iran regarding its nuclear program, John Bolton, the hawk’s hawk of the neocon crowd (remember when he practically yearned for terrorists to blow up Chicago with a nuclear device to teach Barack Obama a lesson?), was busy penning a piece for The Weekly Standard decrying the deal as an “abject surrender” of President Obama to the mullahs of Iran. Bolton essentially makes the familiar (and hyperbolic) conservative case that any deal that does not start with Iran trashing all of its nuclear equipment is yet another Munich moment. From this perspective, there can be no bargaining with Tehran—that is, no diplomacy. The only acceptable path is absolutist demands from the United States and its allies and total capitulation from Iran. Now what are the odds of that yielding success?

Bolton is honest enough to acknowledge that talking, as he sees it, will lead to nothing but an Iran armed to the teeth with nuclear weapons. Thus, his article ends with this assertion: “in truth, an Israeli military strike is the only way to avoid Tehran’s otherwise inevitable march to nuclear weapons.” Thank you, Ambassador, for such candor. He is acknowledging that from his perch there is nothing Obama can do short of giving Bibi Netanyahu the green light for a military assault on Iran. Consequently, Bolton’s critique of the details of the negotiations deserves little attention, for he’s set on war, not diplomacy—a view that may well be reflected throughout hawkish conservative circles.

If this is not enough to discount Bolton’s take on the interim accord, there’s also history. Prior to the US invasion of Iraq, he declared, “We are confident that Saddam Hussein has hidden weapons of mass destruction and production facilities in Iraq,” noting that the US role in Iraq after any invasion would be “fairly minimal.” For years afterward—after no WMDs were found in Iraq—Bolton continued to claim the WMD case for that war was justified. Despite this lousy track record, Bolton, like other neocons, is hardly bashful when it comes to making dire statements about Iran’s nuclear programs and dismissing ongoing efforts at peaceful resolution. But give him credit for being clear about his bottom-line: let’s skip all the chatting and get right to war.