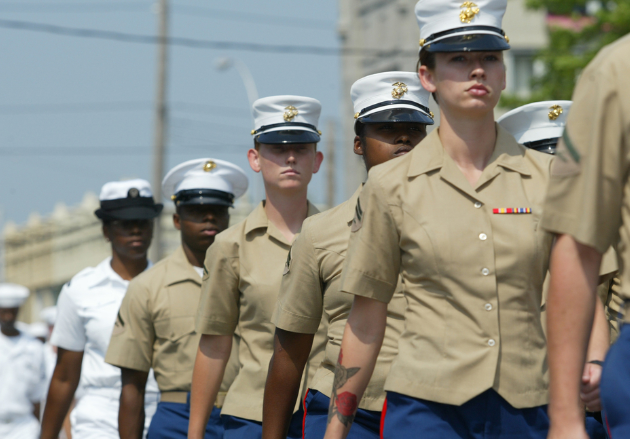 The military’s sexual assault problem has reached epidemic levels. Some 26,000 service members were sexually assaulted in 2012, according to a report released this summer by the Department of Defense (DOD)—up from 19,000 in 2010. This week, the Senate will begin consideration of legislation to curb the crisis. But a battle has emerged over how to solve the problem.

The background: Under the military justice system, if a service member is assaulted, the commander of the alleged perpetrator has the final say over whether charges should be brought.* Commanding officers are also allowed to overturn sexual assault convictions. Top military brass say that commanders need this kind of prosecutorial discretion to maintain order and discipline within the ranks.

Two members of the Senate armed services committee—Kirsten Gillibrand (D-N.Y.) and Claire McCaskill (D-Mo.)—disagree, and have put forward plans to reform the system. But they’re at odds over how to fix it. Gillibrand heads up a coalition that believes military commanders should no longer have control over sexual assault cases, because current policy deters reporting of sex crimes and lets predators off the hook. McCaskill and her supporters in the Senate say Gillibrand’s solution could actually increase retaliation against victims who report assaults, and could prevent some victims from bringing charges against attackers.

McCaskill’s solution: McCaskill’s proposal would allow commanders to keep their power to decide whether to prosecute an alleged sexual predator. An outside civilian panel would have the power to review cases in which commanders decide to forgo prosecution.

McCaskill also recently proposed allowing sexual assault victims to challenge a discharge from the service, and extending the new protections to the military service academies. She has said her legislation “will make our military the most victim-friendly organization in the world.”

Gillibrand says McCaskill’s plan doesn’t go far enough: Gillibrand agrees with McCaskill’s fixes, but says they are not sufficient to end the climate of fear in the armed services that has kept victims from reporting assaults. Earlier this year, Gillibrand introduced a proposal that would remove commanders’ power to make decisions about cases involving sexual assault. If she gets her way, only military prosecutors would be allowed to decide whether to pursue charges. This summer, the armed services committee voted against Gillibrand’s plan. The senator is now attempting to corral enough backing in the full Senate to resurrect her legislation. The Senate will vote on the matter this week.

McCaskill, a former prosecutor who specialized in sex crimes, says that the Gillibrand proposal sounds logical but won’t work. One reason, she argues, is that it could increase retaliation, because victims wouldn’t have the support of commanders to move forward on a sexual assault case. In cases in which prosecutors decline to pursue charges, she adds, victims would be out of luck. “Over the past two years, there have been at least 93 cases in which prosecutors declined to pursue charges, but in which a commander launched a court martial,” McCaskill wrote in an op-ed at the Huffington Post Monday. “Many of those courts-martial resulted in convictions. That’s 93 victims who would never have had their day in court if commanders lost the ability to bring a case to court martial.”

Team Gillibrand: Support for the two senators’ military sexual assault fixes does not break down neatly along party lines, nor along gender lines. Sixteen of the 20 women in the Senate back Gillibrand’s proposal, as do Sens. Ted Cruz (R-Tex.) and Rand Paul (R-Ky.). Several veterans groups, including Iraq and Afghanistan Veterans of America, Vietnam Veterans of America, and the Service Womens Action Network, support Gillibrand’s solution. So do about 30 women’s groups. About a dozen retired military officers and the DOD’s advisory committee on women in the services have also put their weight behind Gillibrand’s amendment.

The New York senator has said she has so far won over 50 senators, including Senate Majority Leader Harry Reid (D-Nev.), but she still has not secured the votes of the 60 senators needed to overcome a filibuster.

Team McCaskill: McCaskill’s more moderate solution has the backing of nearly all of the senators on the armed services committee, including two Republican women—Sens. Kelly Ayotte (R-NH), and Deb Fischer (R-Neb.). Her proposal also has the approval of most of the top military brass, including Defense Secretary Chuck Hagel, and General Ray Odierno, the Army’s chief of staff. All three military service associations have come out in support of McCaskill’s plan, as have many vets groups, and the top Judge Advocate Generals (JAG)—high-level military lawyers—in each service.

Who will win? It’s hard to say. Both senators are still actively drumming up support for their proposals. Since Reid supports Gillibrand’s proposal, undecided Dems may be more likely to get behind her plan.

This is one policy area where the GOP House is unlikely to block Senate Democrat-backed legislation. This summer, the House passed a defense bill that contained many of McCaskill’s reforms. And Rep. Dan Benisheck (R-Mich.) is working to gin up the support for Gillibrand-style reform in the House.

Correction: This article previously stated that the victim’s commander has the final say over whether charges should be brought against an alleged perpetrator.