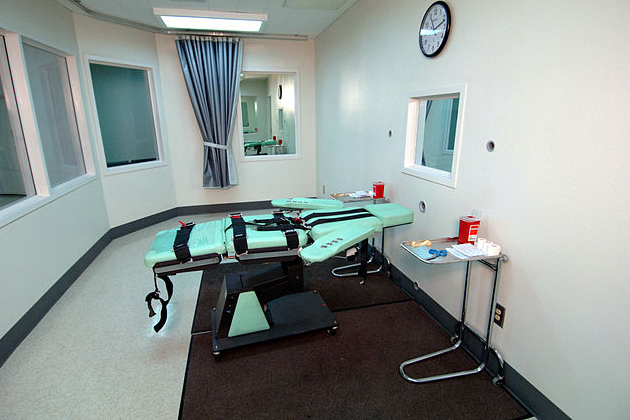 Next Thursday, executioners for the state of Ohio will inject convicted murderer Ronald Phillips with a combination of midazolam and hydromorphone—two drugs that have never before been used in a lethal injection. The two-drug cocktail may have its intended effect, and Phillips may slip into a state of amnesia before quietly dying. But hydromorphone, a powerful painkiller, is not designed to kill, and physicians have no idea how much hydromorphone it will take to end Phillips’ life. It’s possible that Phillips’ execution will fail, or drag on for hours, his sedative wearing off as he vomits, seizes, or slowly suffocates.

A week later, on November 20, Missouri will perform a similar experiment on death row inmate Joseph Paul Franklin. Missouri will become the third state, after Texas and South Dakota, to inject an inmate with pentobarbital synthesized in a compounding pharmacy—a type of drug manufacturer that is not subject to Food and Drug Administration safety regulations. The pentobarbital may simply stop Franklin’s heart, as intended. But if it is contaminated by tiny particles—as drugs manufactured by compounding pharmacies often are—the insides of Franklin’s veins will feel as though they’re being scraped with sandpaper as he dies, warns David Waisel, an associate professor of anesthesiology at Harvard Medical School.

Over the past several years, international drugmakers and the European Union have banned the sale of drugs for use in executions. This has made the components of the Supreme Court-approved three-drug cocktail that states traditionally used to kill inmates—composed of a sedative that left the inmate unable to feel pain, a second drug that works as a paralytic agent, and a third drug that stops his heart—progressively harder to obtain. To overcome this hurdle, Ohio will try to kill an inmate with a never-before-used combinations of drugs, and Missouri will become the third state to execute an inmate using drugs from an unregulated pharmacy. But as Missouri and Ohio’s unprecedented executions approach, medical and legal experts say that they are hard put to predict how much pain these new drug protocols will inflict on death row inmates, or how long convicts may linger before the drugs finally kill them.

“We don’t know how these drugs are going to react because they’ve never been used to kill someone,” says Deborah Denno, a Fordham University law professor and an expert on lethal injections. “It’s like when you wonder what you’re going to be eating tonight and you go home and root through your refrigerator to see what’s there. That’s what these departments of corrections are doing with these drugs.”

In Ohio, where new rules call for executioners to kill inmates with an overdose of the painkiller hydromorphone, experts worry that some of hydromorphone’s excruciating side effects may kick in before Phillips dies. Jonathan Groner, a professor of clinical surgery at the Ohio State University College of Medicine who has written extensively on the death penalty, says effects of a hydromorphone overdose include an extreme burning sensation, seizures, hallucination, panic attacks, vomiting, and muscle pain or spasms. Waisel, who has testified extensively on capital-punishment methods, adds that a hydromorphone overdose could result in soft tissue collapse—the same phenomenon that causes sleep apnea patients to jerk awake—that an inmate who had been paralyzed would be unable to clear by jerking or coughing. Instead, he could feel as though he were choking to death.

Because hydromorphone is not designed to kill a person, Groner says, there are no clinical guidelines for how to give a lethal overdose. “You’re basically relying on the toxic side effects to kill people while guessing at what levels that occurs,” he explains.

Many death row inmates are morbidly obese—they leave their cells only one hour a day—or are former drug abusers whose veins have collapsed or are riven with scar tissue. Both factors make setting an IV line extremely difficult, especially when the person doing so is a prison staffer with limited medical training. (Phillips, the Ohio prisoner, testified that during an October checkup, doctors had a hard time locating his veins.) An improperly administered sedative could cause an inmate to remain awake throughout his execution. Denno notes that in 2006, a California judge ruled that there was enough evidence to conclude that 6 of 11 inmates executed since 1978 did not receive enough sedative and died painful deaths. If the hydromorphone IV is set poorly, says Groner, “it would be absorbed under the skin, subcutaneously, very slowly, and that death could be extremely prolonged…It may be painful, and it may take forever.”

“It may be painful, and it may take forever.”

Executioners tend to administer drugs much faster than a doctor would. “They push on the plunger as hard as they can and get out of there, because it’s unpleasant to be involved with somebody’s death,” Groner says. But infusing a drug too quickly can have dangerous effects—and because doctors are not in the habit of administering hydromorphone too quickly, the medical community has no way of predicting what those effects are.

When Ohio executes Phillips, it will become the second state to sedate a death row inmate with midazolam—a drug which causes memory loss and relaxation, but not necessarily a loss of awareness—instead of sodium thiopental, the powerful anesthetic in the Supreme Court-approved three-drug cocktail. Only one other death row inmate has received a lethal injection containing midazolam—William Happ, whom Florida put to death in October. Medical experts worried ahead of Happ’s execution that the midazolam would wear off before he died, resulting in extreme pain. The day after Happ’s execution, the Associated Press reported, “It appeared Happ remained conscious longer and made more body movements after losing consciousness” than prisoners who were sedated by drugs that are no longer available.

“Reporters who witness executions are a salty bunch,” Groner says. “Nothing really bothers them. But I talked to reporters who were there in Florida. And one said to me, ‘I thought he would never die’…I think that’s pretty torturous, to be told you’re about to die, and to do it takes an hour and a half.” Allen L. Bohnert, an assistant federal public defender who is helping represent Phillips in Ohio, argues that a prolonged death like this would be unconstitutional. This is part of Bohnert and his colleagues’ case for delaying Phillips’ execution, although the Supreme Court has not spelled out whether pain from an execution constitutes cruel and unusual punishment.

Although Ohio’s new execution drugs have lethal-injection experts particularly worried, Missouri’s decision to acquire lethal drugs from unregulated compounding pharmacies is a source of concern, too.

Pentobarbital, the drug that Missouri will use to kill Franklin, has been used frequently in executions for the past several years. But pentobarbital’s European manufacturer, Lundbeck, has refused to sell the product for executions since 2011, and the last supply of pentobarbital that Lundbeck sold to any US state for executions will expire this month. So Missouri officials have turned to compounding pharmacies to synthesize a pentobarbital knockoff from raw materials.

Pentobarbital that contains tiny contaminants could cause pain…compared to rubbing sandpaper on an open wound.

It unclear whether the other states that rely on pentobarbital will follow Missouri, South Dakota, and Texas’ example and turn to compounding pharmacies for the drug. But at least one other state, Georgia, faced legal challenges in doing so. After Georgia opted to use compounded pentobarbitol, concerns about the product prompted a judge to grant a death row inmate a stay of execution. Concerns include the fact that compounded drugs are prone to contamination. Pentobarbital that contains even tiny contaminants, says Waisel, could cause an inmate immense pain in his veins that Waisel compared to rubbing sandpaper on an open wound.

Missouri officials have refused to identify which compounding pharmacy the state will use. But surveys by the FDA and state boards of pharmacy routinely find that drugs from these facilities are not as potent as they should be, says Sarah Sellers, a safety consultant for pharmaceutical companies. Waisel says that pentobarbital that is not potent enough could result in a lingering death that “drags on and drags on and drags on. It would be awful.”