They Were Soldiers: How the Wounded Return From America’s Wars
By Ann Jones
Dispatch Books

Ann Jones has spent a significant portion of her career chronicling the lives of civilians affected by war. Shortly after 9/11, she went to Afghanistan as a humanitarian volunteer to assist widows, rape survivors, and women cast aside by the Taliban—an experience which would form the basis of her book Kabul in Winter: Life Without Peace in Afghanistan. In the years since, Jones worked throughout sub-Saharan Africa, south Asia, and the Middle East, all the while questioning and documenting how people respond to and recover from violence. 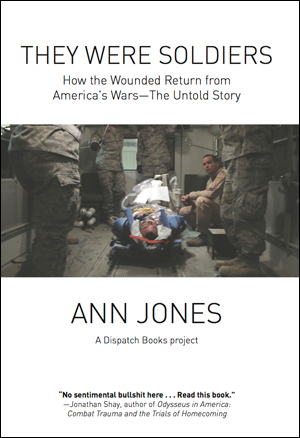 Now, after more than a decade of continued reporting on civilians in war zones and post-conflict countries, Jones takes the civilians out of the equation all together, flipping the focus to the often-ignored effects of war on the troops. They Were Soldiers: How the Wounded Return From America’s Wars is a heavy read in a deceptively small package. (You can read an adapted excerpt here.) Drawing from harrowing interviews and her time working and living in Afghanistan—including embedding with troops from 2010-2011—Jones categorically explains some of the darkest mental, physical, and procedural ailments now plaguing US troops and their families. Spanning topics of death, dismemberment, and psychological trauma, the result is often brutal—an uncompromisingly visceral depiction of modern war injuries told with all the precision of a surgical scalpel and the damning insights of a trained pen.

In the first few pages alone, Jones explains traumatic war injuries, introduces the reality of death by ambush or improvised explosive devices (IEDs) near forward operating bases and combat outposts, and tracks the remains of the dead as they move from Afghanistan to Dover Air Force Base without subtlety. Interviews with Mortuary Affairs—the specialized unit tasked with retrieving, identifying, and shipping the dead—reveal how devastatingly busy they are. According to Jones, one officer routinely advises units to stock body bags for 10 to 30 percent of their personnel, in case anything needs to be double-bagged.

A body can “disintegrate into such tiny fragments that it returns to Earth in a snowfall of flesh.”

Because of the increasing risk and power of the IEDs, Jones says some troops have begun “applying tourniquets before they go out on patrol” to prevent death from blood loss. But that may not always help. While IEDs are only designed to maim, if the blast is strong enough, a body can “disintegrate into such tiny fragments that it returns to Earth in a snowfall of flesh,” she writes. For those that only lose limbs, cleaning the resulting wounds is then a laborious process of continual transportation, multiple doctors, surgeries, and sutures—and that’s before the long rehab process and the common struggles with addictive opioids.

Traumatic brain injuries are a separate story. Because they’re internal, they often go unseen, untreated, or misdiagnosed. If an injury is noticed, military hierarchy may encourage individuals to brush off the complaint until it becomes untreatable. According to Jones, this cultural dynamic is one reason military sexual assaults are particularly damaging.

When these traumatic events trigger drug and alcohol abuse or mental illness, the results can be catastrophic for soldiers and their families. In recent years, media accounts of military suicides and sexual assault have gained traction, prompting the military and Congress to pay attention to these issues. However, the facts speak for themselves: Nearly 240,000 troops have been diagnosed with PTSD since 2001, and 18 to 22 veterans have killed themselves daily each year since 1999, according to the VA. “Sooner or later almost every American soldier comes home,” Jones writes, “on a stretcher, in a box, in an altered state of mind.”

Even with the official end of combat in Iraq, and the looming drawdown of troops in Afghanistan, the war’s consequences carry on. Just as we’re leaving behind billions of dollars worth of equipment and infrastructure, Ann Jones argues, we’re also leaving parts of the people we’ve sent there.