So how much would you be earning today if the phenomenal income growth at the very top of the income scale had trickled down to most Americans? Use this calculator to find out.

If most Americans’ incomes had grown at the same rate as the 1 percent’s over the past 50 years, you currently would be making $0, the same amount you already do. Congrats! You’re already in the top 1 percent of earners!

In other words, if you’re in the bottom 90 percent of earners, your current income would be an estimated 205 percent higher if the vast majority of incomes had kept up with the gains experienced by the superwealthy. 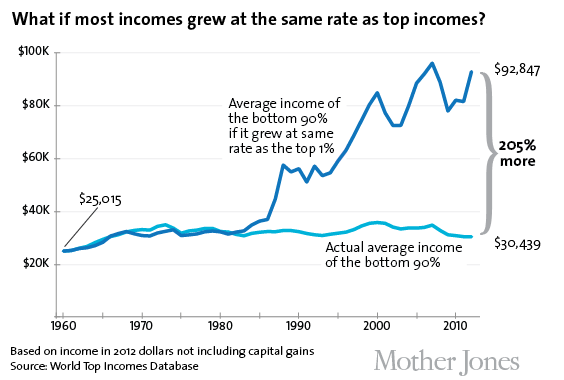 At the lowest end of the bottom 90 percent, the difference is even more extreme: If the minimum wage had kept up with the 1 percent, it would be nearly 250 percent higher than it is today.

Back in the real world, most Americans’ incomes have stagnated over the past few decades. Meanwhile, top incomes have skyrocketed, leaving middle- and low-income Americans behind and accelerating the growth of the income gap that began opening in the 1980s. 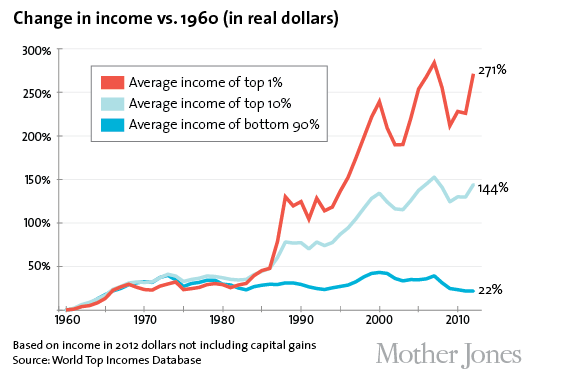 Methodology: The data used to the make this calculator is from the World Top Incomes Database. All income figures used to make the calculator are in 2012 dollars and do not include capital gains. Your hypothetical income is an estimate based on applying the overall change in the average income of the top 1 percent between 1960 and 2012 to the average incomes in 2012 for the bottom 90th, the top 10th to 5th, and top 5th to 1st income percentiles.