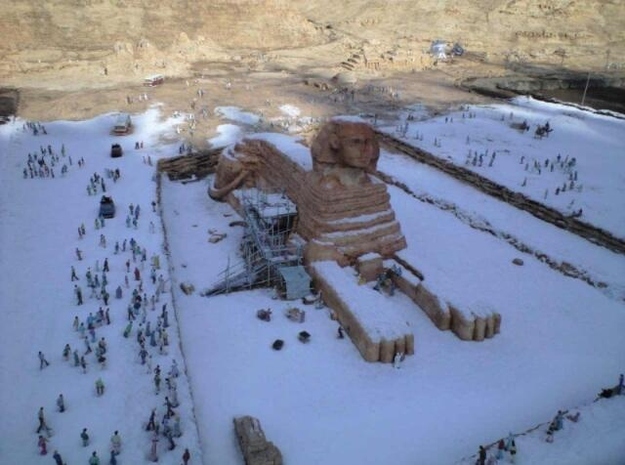 For the first time in 112 years, it snows in Cairo pic.twitter.com/Chrmfcj0G1

The cause, according to the Weather Underground, was a stalled area of low pressure.

However, there were also more dubious tweets, especially of this image:

According to some sleuthing by Buzzfeed, that image actually seems to be of a theme park in Japan—where snow would be decidedly less extraordinary—that contains a sphinx replica.

Meanwhile, just how rare is snow in Egypt, anyway? Capital Weather Gang and New York Magazine have called into question assertions that it has not occurred in 112 years. Still, snow is extremely uncommon—as is rain, for that matter: According to Wunderground, Cairo receives less than an inch of rain per year.

And what of the global warming snark? Actually not that far off: The snowy weather does seem tied to a weirdly behaving jet stream, and one prominent scientific idea of late is that global warming is interfering with the jet stream, leading to “stuck” weather and all kinds of extremes.