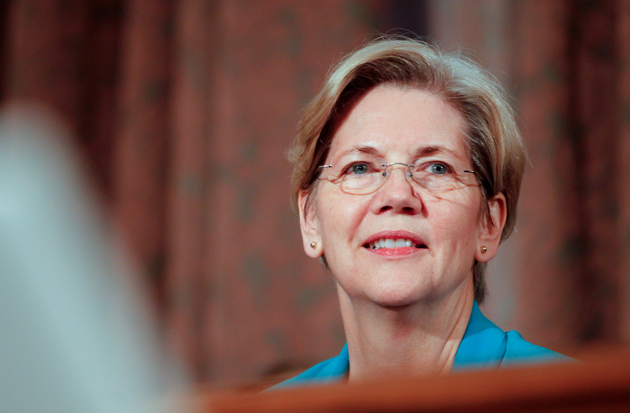 On Wednesday, Sen. Elizabeth Warren (D-Mass.) called on the biggest US banks to disclose their donations to think tanks, which influence laws that affect them.

Under current law, banks and other corporations are not required to publicly report their contributions to think tanks. That means that lawmakers who use think tank data and analysis to shape laws and regulations designed to police banks do not know how much bank money influences that research. “A lot of the power of big banks over DC comes from donations to think tanks, who then put out ‘studies’ favorable to certain ways of doing business,” says one Democratic aide. In a letter to the CEOs of the nation’s six largest financial institutions—JPMorgan Chase, Wells Fargo, Bank of America, Goldman Sachs, Citigroup, and Morgan Stanley—Warren called on the companies to start voluntarily reporting their donations to these policy shops.

“To prevent future [economic] crises,” Warren says in the letter, “policymakers need access to objective, high-quality research, data, and analysis about our consumer and financial markets…[P]rivate think tanks are extremely well-suited to provide this research and analysis, but for it to be valuable, such research and analysis must be truly independent.”

Corporations are required to tell the public when they lobby members of Congress or government agencies, Warren says, so “the same transparency should exist for any indirect efforts [banks] make to influence policymaking through financial contributions to think tanks.”

Warren’s demand for think tank money transparency is yet another approach to curbing too-big-to-fail—the problem of the biggest Wall Street banks being so large and loosely regulated that their failure would endanger the entire financial system. One of the reasons too-big-to-fail is still a problem, five years after the financial crisis, is that banks are good at weakening the laws and regulations meant to rein them in.

One way to do that is through think tanks. The Roosevelt Institute, for example, recently published a report on the successes and failures of the 2010 Dodd-Frank financial reform act. If the institute had received loads of Wall Street cash, it might have been motivated to minimize the failures of the law, and thus further regulation.

Warren’s letter comes a few days after the president and vice president of the centrist think tank Third Way wrote a Wall Street Journal op-ed warning Democrats against following Warren over a “populist cliff.”  The Nation reported this week that Third Way employs a Washington consulting firm that represents financial institutions including MasterCard and Deutsche Bank.

The letter also comes on the heels of a recent defeat for corporate contribution transparency advocates. The Securities and Exchange Commission, a Wall Street regulator, considered forcing corporations to disclose the money they spend on campaigns and elections. But just this week, the agency announced it had dropped that issue from its 2014 priority list.