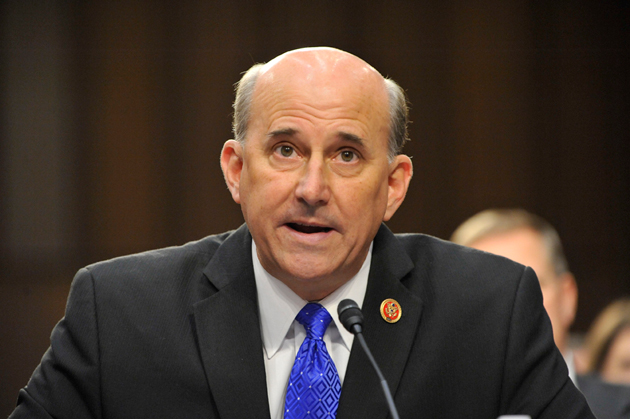 Members of Congress have spent the past few weeks grousing about their attempts to enroll in new health insurance plans they forced on themselves when they passed the Affordable Care Act. The law requires members of Congress to get their insurance, and employer subsidy, through the DC health exchange rather than through the Federal Employee Health Benefits Network, where they’d been getting it for decades—at a good price.

Not every member is signing up for the exchange. Some, like Sen. Ted Cruz (R-Texas), have cushy coverage through a spouse’s employer. Others are eligible for Medicare, the government’s plan for the elderly. And then there’s Rep. Louie Gohmert, a Texas tea party luminary and an outspoken opponent of the ACA. Rather than participate, Gohmert says he intends to pay a fine the law imposes and remain uninsured when the ACA’s individual mandate kicks in early next year. “I’ve pledged that I’m not taking the subsidy,” he told Politico. “Too many people in my district have lost their insurance because of Obamacare…and because of Obamacare, the remaining insurance is just too expensive. So I’m not going to have insurance, it looks like.”

While lots of members of Congress oppose the ACA, Gohmert may be the first one who says he plans to go uninsured out of spite. (Former Wisconsin Rep. Steve Kagen, a doctor, previously pledged to refuse federal health coverage until all Americans had access to affordable care.)

But will Gohmert really experience being uninsured the same way the other 43 million uninsured Americans do? After all, members of Congress have always had a pretty sweet deal when it comes to health care. They have access to elite medical facilities that the general public does not, most notably the Office of the Attending Physician (OAP). That’s Congress’s in-house medical facility, conveniently housed in the US Capitol. Members of Congress don’t even have to leave the building to get a flu shot, have their blood pressure checked, do physical therapy, or get an x-ray.

For a mere $503 a year, members of Congress can get top-flight medical care without insurance—but not hospital care.

For a mere $503 a year, members of Congress can get top-flight medical care without a wait, and without ever having to deal with an insurance company. The OAP has on-site primary care doctors, nurses, a pharmacist, and medical and x-ray technicians. When a member needs one, a specialist is brought in from military hospitals and provides services at no charge (except to the taxpayers). Members of Congress also have access to free outpatient care at DC-area military installations, including the Bethesda Naval Hospital and Walter Reed Army Medical Center.

Gohmert’s office didn’t respond to a question about whether he uses the OAP, but just by virtue of being in Congress, he is the potential beneficiary of a lot of socialized medicine. Nevertheless, his decision to go uninsured may not be especially prudent. While Gohmert will still have access to a lot more health care than most uninsured Americans, giving up his federal health insurance benefits will leave him exposed to the same ruinous financial prospects as any poor Texan who lacks insurance. He may have access to free outpatient care at military hospitals and clinics, but even members of Congress need insurance coverage for inpatient care.

So if Gohmert is having a T-bone with some K Street lobbyists at the Palm, has a heart attack and gets rushed to George Washington University Hospital, he could quickly run up bills that would outpace his annual congressional salary. Hospitals are notorious for price-gouging the uninsured—Gohmert could expect to pay $40,000 to almost $70,000 out of pocket, according to data crunched by the New York Times.

That’s serious money, especially for one of the poorest members in the House: Gohmert’s 2011 financial disclosures put his net worth in the negative numbers. Unlike many of his colleagues, he doesn’t have the deep pockets that would allow him to weather a medical crisis. If he gets sick, Gohmert had best hope the military hospitals will make an exception for him. Otherwise, just like anyone else in that situation, he might have to file for bankruptcy, forcing the hospital to eat the costs. That’s not exactly the model of personal responsibility Republicans like to project. But it is exactly the sort of scenario the ACA was designed to prevent.

It’s hard to imagine that Gohmert is dumb enough to think that going without insurance at age 60 is wise.

It’s hard to imagine that Gohmert is dumb enough to think that going without insurance at age 60 is wise, but you never know. This is a guy who, among other things, once suggested that the US could not be certain that sending foreign aid to China to protect rare wildcats would not result in “moo goo cat pan.”

But Gohmert’s case suggests another possibility: that he was serious when he said he can’t afford his premiums without the employer subsidy he’s rejecting.

The ACA still has a big flaw when it comes to insuring people over 55. Plans for people 55 to 65 on the individual market are extremely expensive, largely because the law lets private insurers charge them more than younger people for the same coverage. After all, older people get sick more and use far more health care than people in their twenties. But that doesn’t make the high premiums any easier to stomach.

According to the DC Healthlink, the cheapest plan Gohmert and his wife qualify for is a bronze plan with premiums of $1,152 a month—more than 10 percent of his salary. And it would cover only 60 percent of the expenses were he or his wife to fall ill. Given his finances, it’s no wonder he experienced sticker shock in the individual market. (For all his fulminating about the evils of government, Gohmert has spent his entire career as a public employee—so this encounter with the private sector must have been doubly shocking.)

The solution to Gohmert’s problem would have been to extend Medicare under the ACA to include anyone over 55—but the GOP demurred.

Gohmert seems willing to bet that he’ll stay healthy until he qualifies for Medicare in five years. The odds are worrisome. According to the American Heart Association, more than 70 percent of men over 60 already have cardiovascular disease. The average age of a first heart attack is 65.

The solution to his problem would have been to extend Medicare under the ACA to include anyone over 55—or, alternately, to let people over 55 buy into the federal employee health benefits program, which has a large risk pool and would have provided lower rates. Instead, Congress forced its aging members onto the individual market, where they’re now facing some of the realities many of their constituents have grappled with for years. It’s probably too much to hope that this encounter with what the rest of us experience will prompt GOP members like Gohmert to try and work with Democrats to fix the ACA’s flaws. But maybe being uninsured for a while will broaden his perspective.