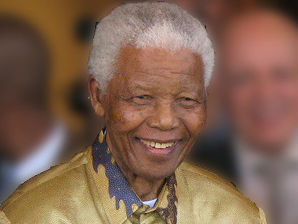 Yes, some of the reactions to Nelson Mandela‘s death have been less than ideal. As a few have pointed out, the comments on, say, this National Review blog post or Sen. Ted Cruz’s Facebook page regarding Mandela (the guy was a commie, racist murderer, yada yada) are fairly disgusting. To be fair, some commenters on the internet are always nasty and dumb, whatever the topic. But how about people who (maybe?) should know better? Here are the worst reactions to Mandela’s passing, courtesy of…

1. Rick Santorum: With a straight face, the former Republican senator and failed presidential candidate, who is now making pro-Christian movies, compared Mandela’s long struggle against the apartheid regime to Republicans’ battle against…Obamacare: “He was fighting against some…great injustice,” Santorum said on Fox News yesterday, “and I would make the argument that we have a great injustice going on right now in this country with an ever-increasing size of government that is taking over and controlling people’s lives, and Obamacare is front and center in that.”

There are a few key difference between the Affordable Care Act and a racist tyranny, but whatever.

2. Bill O’Reilly: During the same Fox News segment, host Bill O’Reilly emphasized that “great man” Nelson Mandela was a “communist.” This is not true, but it is true that South Africa has a partially socialized health care system. 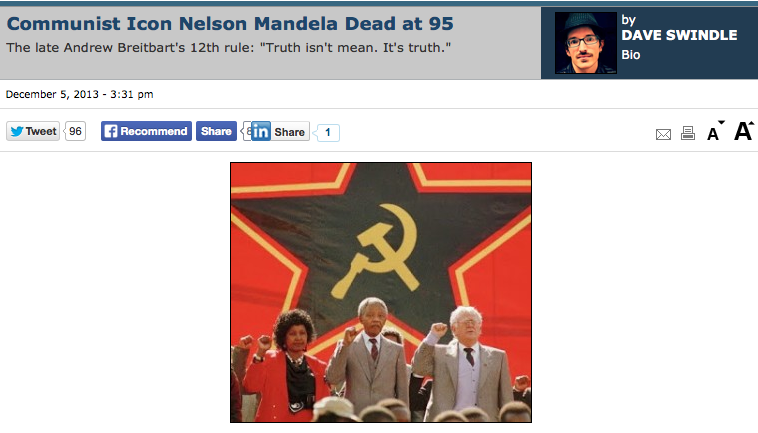 5. Gaz from Geordie Shore: The star of the MTV UK reality show, who claims he “should have a degree in pulling women,” sent this (since-deleted) tweet: 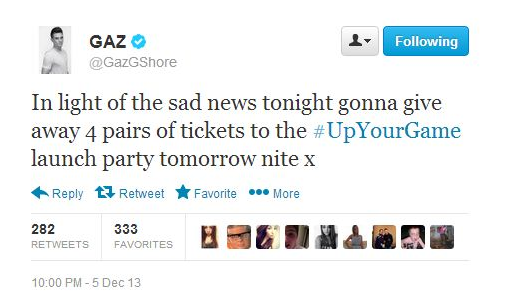 Because nothing says “mourning the loss of a towering hero” than “free launch party tickets for a debut single.”

Update: This one, too, courtesy of Rick Clark, sheriff of Pickens County, SC, who wrote on Friday that he would defy President Obama’s order to lower American flags to half-staff in honor of Mandela.

“Nelson Mandela did great things for his country and was a brave man but he was not an AMERICAN!!!” Clark writes. “The flag should be lowered at our Embassy in S. Africa, but not here. Our flag is at half staff today for a Deputy in the low country who died going to help his fellow Deputy. He deserves the honor. I have ordered that the flag here at my office back up after tomorrow’s mourning of Pearl Harbor Day!” 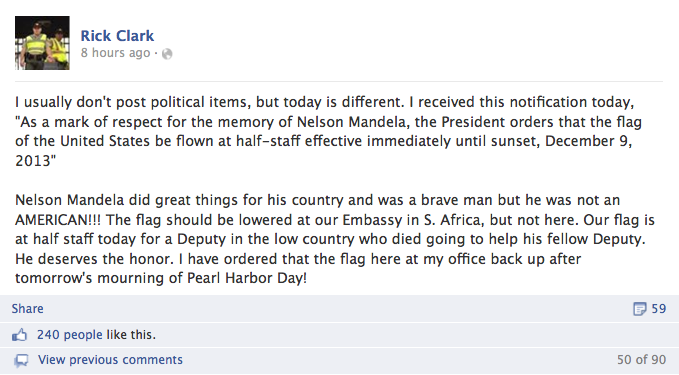