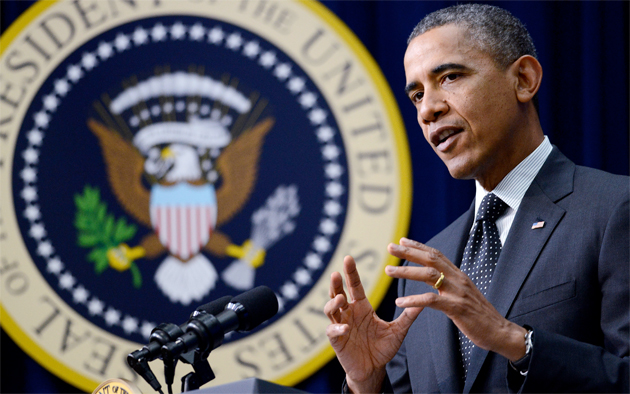 In politics, hyperbole is routine. It’s common for campaign ads to praise a candidate as a savior or denigrate a contender as the destroyer of worlds. On Capitol Hill, lawmakers regularly claim that a particular piece of legislation will yield everlasting rainbows—or bring about complete devastation. President Barack Obama has been hailed by fans as a champion of hope and change and declaimed by foes as a secret, foreign-born, America-hating Muslim socialist bearing a covert plot to weaken the nation he leads. But every once in the rare while, hyperbole is warranted. And as the fierce mud-wrestling over Obamacare continues, it’s not going too far to say that this clash is darn close to a life-and-death battle between the Democrats and Republicans. Which explains why the conflict is not ending, even as the White House patches up the glitchy Healthcare.gov website. Tea party leader Sen. Ted Cruz (R-Texas) is still tweeting out daily his demand for a full repeal of Obamacare, and Obama, as he is demonstrating at a White House event on Tuesday afternoon, is revving up the White House sales campaign for the Affordable Care Act.

With the website somewhat functioning, the fundamental debate over Obamacare resumes, and this debate pits the basic philosophy of each party against the other. Ever since becoming tea partyized, the Republican Party has essentially stood for one notion: Government is the problem. After the economic crash of 2008, Republicans tended to blame Washington’s federal budget woes—not the actions of Wall Street dealers and schemers—for the financial calamity that sent the economy into the most severe recession since the Great Depression. They saw little need for government action to re-regulate the financial shenanigans that led to millions of Americans losing their jobs and homes. And they fiercely opposed the idea that government should stimulate the collapsing economy. The tea party victory of 2010 pushed the GOP further in this direction, with new Republican legislators obsessively peddling a single-minded agenda: Big government must be crushed. Obamacare, naturally, was the main target of this ideological wrath. So much so that this year, House Speaker John Boehner was outmaneuvered by Cruz-inspired tea party back-benchers determined to shut down the government to thwart health care reform law.

Obamacare does indeed embody the president’s view that government can be a force for positive change. After the 2010 election—even before the GOP was close to settling on Mitt Romney as its 2012 presidential nominee—Obama began setting up a strong ideological contrast between himself and the Republicans in preparation for his reelection battle. He repeatedly tried to place the ongoing battles of the moment—over the budget, over the debt ceiling—within an overarching clash of values. The Rs, he argued, believed government should be reduced and people left to their own devices within the marketplace. Instead, he maintained, government action was crucial for overcoming the economic challenges the country faced. Government could shape the economy of the future by investing in education, infrastructure, and clean energy; the federal government could be a positive actor in protecting middle-class Americans and lifting up the poor. The 2012 presidential campaign did become a face-off between these two distinct visions. (Rep. Paul Ryan’s acceptance speech at the Tampa convention—a hardcore libertarian critique of government—was perhaps the most archly ideological convention speech in decades.)

Obama won this contest, but the fight over the big stuff wasn’t over. And the Republicans didn’t have to depend on libertarian abstractions to wage this battle. Obamacare still loomed. Though it had passed Congress and been okayed by the Supreme Court, the health care law still did not poll well. (At least half of those who had an opinion of the Affordable Care Act were dubious, particularly after years of relentless bashing from the right. The skeptics, though, did include Americans who believed Obamacare did not go far enough and relied too much on the private health insurance industry.) And because the program had yet to kick in fully, tea party Republicans saw there was still an opportunity. Obamacare did represent what they most fundamentally opposed: active government intervention in society. The Republican Party’s raison d’être had become a single note: assail the idea that government can be a productive force (in any matter other than perhaps national security). Though GOPers have repeatedly deployed false attacks—death panel!—they were not wrong to zoom in on Obamacare as the defining difference between them and the Dems.

In recent weeks, the basics of this fight have been obscured by the dustups over the website and the cancelation of junky policies within the individual market. Now, the bottom-line debate is reemerging: Is this big-government program worthwhile and effective or not? (Sen. Bob Corker, a Republican form Tennessee, recently claimed Obamacare was beyond fixing.) But within months, it may well be that abstract arguments over the nature of Obamacare will be trumped by the realities of the Affordable Care Act. Eventually, there will be stats and facts to consider: how many people receive insurance through the exchanges, what happens with premiums, the direction of health care costs, customer satisfaction, and the like. Though the results may be open to debate for a while, it is distinctly possible that one side or the other will be proven right (or wrong). If the website functions, millions sign up, and the health care market doesn’t crash, and premiums don’t zoom up—and this will be on top of the already existing benefits of Obamacare, including removing preexisting conditions restraints, allowing young adults to remain on their parents’ policies, reducing out-of-pocket prescription drug costs for seniors, and forcing insurance companies to devote a higher percentage of premiums to health care coverage—where will the Republicans be? Not only will they be failed doomsayers; they will have lost the No. 1 item on their why-you-should-vote-GOP list. Their anti-government crusade will be derailed. They will be a train without a motor.

Should Obamacare not work, then Obama’s vision—which reflects the progressive tradition of the past century—will be a flat tire. He will no longer be able to advance the cause of government activism. Expand Head Start? Create an infrastructure bank? Why should government be allowed (or trusted) to increase its reach? He can talk about helping the middle class. But how? The failed rollout of the website was a problem in so many ways but especially because it suggested that government cannot perform competently. A more extensive failure with Obamacare would suggest that government cannot be used in the manner Obama wishes to see it utilized.

What’s at stake in this never-ending debate over Obamacare are the foundational premises of each party. The success of Obamacare could be close to a death blow to the GOP. Ditto for Obamacare and the Democrats, should it collapse. Of course, this has implications for next year’s congressional elections—though the traditionally low off-year turnout and gerrymandering could be offsetting factors. But there likely will come a time, if not in months, then in years, when the results of Obamacare will matter as much as the rhetoric generated by Obamacare—perhaps more so. When that day arrives, it will be quite a bad moment for one of the two parties.