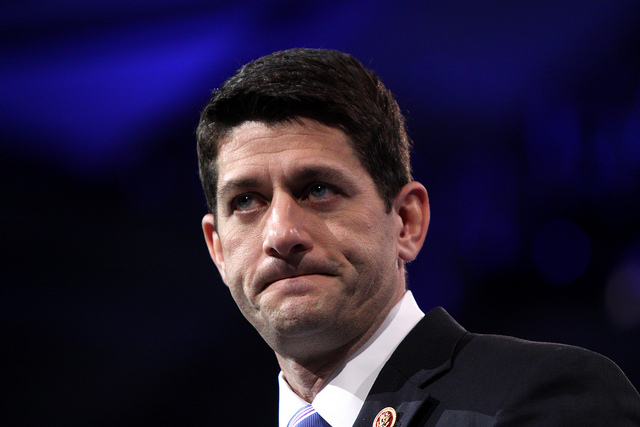 So much for a budget détente. Less than a week after he and Sen. Patty Murray (D-Wash.) reached a deal on a federal budget for fiscal years 2014 and 2015—a remarkable feat of comity and a marked shift from congress’ recent habit of putting off deals to the last possible second—Rep. Paul Ryan (R-Wis.) is gearing up for the next fiscal stalemate.

In a Sunday television appearance, Ryan stressed that he wants concessions from Democrats in exchange for raising the debt ceiling to prevent the US government from defaulting on its borrowing this spring. “We as a caucus—along with our Senate counterparts—are going to meet and discuss what it is we’re going to want out of the debt limit,” Ryan, the chairman of the House Budget Committee, said on Fox News. “We don’t want nothing out of this debt limit. We’re going to decide what it is we’re going to accomplish out of this debt-limit fight.”

In recent years, House Republicans have embraced economic brinksmanship as a negotiating tool and begun using once-routine debt-ceiling adjustments to try to advance their cost-cutting agenda. They took the nation to the edge of default in 2011, extracting budget cuts in exchange from Democrats. Another debt-ceiling fight in October of this year shut down the federal government—and sent Republican approval ratings plummeting. Republicans relented before the debt ceiling was actually breached, but the battle did lasting damage to the party and the economy. It seems unlikely that Ryan and his House Republican colleagues would push the nation so close to the brink again, given the political toll past fights have taken.

But his comments are an indicative PR move. Ryan clearly thinks of himself as a future presidential contender. His ability to reach a budget deal boosts his resume, an example he can now cite when questioned about his ability to foster bipartisan deals to accomplish his goals. But it cost Ryan his wonder-boy status among the party’s right flank. Ryan’s decision to trade sequestration cuts, a mandatory cap on discretionary spending revered by the right, for future savings angered conservatives. Pretty much every major tea party group—Heritage Action, Americans for Prosperity, Freedomworks, etc.—denounced the plan as a sellout to Democrats.

Ryan’s colleagues were unusually frank in rebutting those groups last week. “Frankly, I think they’re misleading their followers,” House Speaker John Boehner (R-Ohio) said. “I think they’re pushing our members in places they don’t want to be. And, frankly, I just think they’ve lost all credibility.” Ryan wasn’t quite as outspoken about his differences with the party’s conservative wing. “I’d prefer to keep these conversation within our family,” he said on Meet the Press this weekend. Republicans, like him, who want to someday run for higher office still need to bow down before the tea party’s dogma of obstinacy. Assuring a fight over the debt ceiling could help Ryan return to those groups’ good graces.