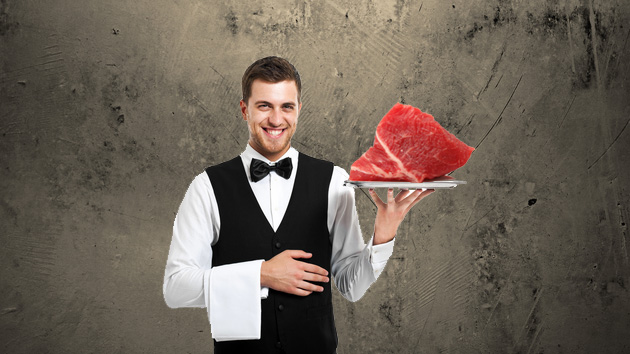 About 3,000 Americans die every year from foodborne diseases, and more than 120,000 are hospitalized. Recognizing that restaurants and delis are the source of more than half of foodborne illness outbreaks, health specialists for the Centers for Disease Control and Prevention (CDC) went inside the kitchens of hundreds of restaurants across 10 states (California, Colorado, Connecticut, Georgia, Minnesota, New York, Oregon, Iowa, Rhode Island, and Tennessee) to determine which practices could be making people sick. They released their findings this month.

The result aren’t pretty. Many workers lack basic knowledge about food safety, don’t wash their hands enough, and serve undercooked meat. Employees commonly show up to work when they’re vomiting, because they fear losing pay and leaving the restaurant understaffed. As we reported in June, a number of states have introduced bills that prevent localities from passing laws that require paid sick leave—and they’re backed by big restaurant chains, including McDonald’s, Pizza Hut, and Olive Garden. (Is it any wonder that struggling restaurant workers are going on strike?) Restaurant employees working sick is “an important cause of foodborne illness outbreaks,” say the researchers.

So, without further ado, here are eight of the most terrifying statistics from the new reports:

1. Nearly two-thirds of restaurant workers who handle raw beef aren’t washing their hands afterward: The researchers looked at 247 restaurants that use raw ground beef. Employees touched the beef in 192 restaurants, and in 119 of those restaurants, employees who touched the raw beef with their bare hands didn’t wash them before touching other cooked food. That means that the pathogens from the raw beef—particularly E. coli, which causes more than 61,000 illnesses and 20 deaths a year—could spread from the beef to the cooked food leaving the kitchen.

2. About 40 percent of restaurants don’t usually use separate cutting boards for raw chicken: That’s according to the 448 kitchen managers the CDC interviewed in both independent and chain restaurants. About 25 percent of managers also said they don’t often use disposable gloves when handling chicken.

3. Most managers don’t know the safe cooking temperature for chicken: In that same group of 448 kitchen managers, only 194 knew the  FDA-recommended cooking temperature for raw chicken (165 degrees Fahrenheit). About a quarter of the managers underestimated the correct temperature, and 33 admitted they had no clue. (Incredibly, one manager actually guessed 90 degrees—lower than a normal human body temperature. We hope he or she was thinking in Celsius.)

4. Almost half of chefs don’t use a thermometer to make sure a burger is cooked: Out of 385 restaurants, the managers in 190 of them said that they “never” used thermometers to check when a burger was done, instead determining doneness by color or feel.

5 …and as a result, a bunch of burgers are coming out raw: CDC inspectors found that 12 percent of the 234 hamburgers they tested were undercooked (less than 155 degrees Fahrenheit). When customers ordered a burger medium-rare, that number rose significantly: 40 percent of those burgers were undercooked.

6. 40 percent of sick food workers didn’t go home because they have no sick leave: Of 491 food workers, more than half said they had worked a shift while ill. One hundred twenty-seven of those workers indicated that they did so because they had no paid sick leave or sick leave policy. According to the CDC, a lot of these workers also didn’t want to leave their coworkers short-staffed: “Social and personal concerns appear more likely to guide workers’ decisions” than pay, the researchers wrote.

7. Seriously. The cook is vomiting: In that same group of workers, 20 percent said they were vomiting or had diarrhea on at least one shift in 2012, and 12 percent indicated that they had those symptoms for at least two shifts.

8. Vegetarians aren’t off the hook: Out of 37 “leafy green” shipments—like lettuce or spinach—almost half were not delivered at the recommended temperature of 41 degrees Fahrenheit. According to the CDC, keeping greens stored above that temperature promotes the growth of germs. Fortunately, two out of three managers at 411 restaurants said they had rejected a greens shipment because the produce was rotten or too warm.