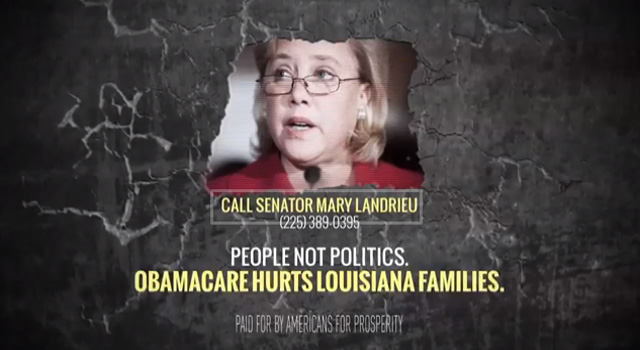 Americans for Prosperity, the national conservative group backed by the billionaire industrialists Charles and David Koch, has kicked off 2014 right where it left off in 2013. On Thursday, AFP unveiled a TV ad campaign hammering three Democratic senators for their support of the Affordable Care Act.

AFP has spent more than $2.5 million on a three-week run of ads starting this week that criticize Sens. Kay Hagan (D-N.C.), Mary Landrieu (D-La.), and Jeanne Shaheen (D-N.H.). Two of those three senators—Hagan and Landrieu—are among the most vulnerable Democratic senators running for reelection this November, according to polling. (Polls consistently show Shaheen with strong support back home.)

Here’s one of the AFP ads, this one attacking Hagan:

While the Hagan ad quotes North Carolina resident (and vocal Obamacare critic) Sheila Salter as saying Hagan “just doesn’t get it,” the other two spots slam Landrieu and Shaheen for specifically claiming that Americans could keep their existing health insurance under the Affordable Care Act. This was a popular talking point of President Obama’s that, well, turned out not to be true. PolitiFact named the statement its 2013 Lie of the Year.

AFP’s latest Obamacare ad blitz offers a taste of a midterm election year in which President Obama’s health-care law will be a hot topic of debate and a political bludgeon wielded by the law’s opponents. AFP is one of the leading anti-Obamacare groups, spending more than $16 million on ads criticizing the law since August, according to AFP spokesman Levi Russell.