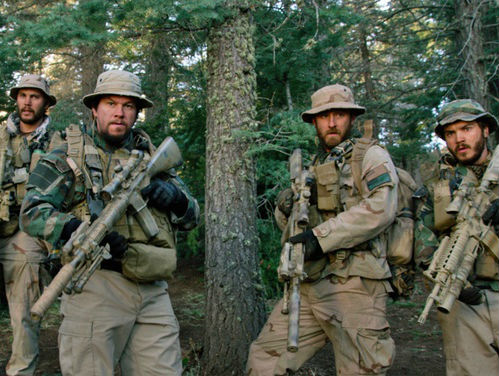 Lone Survivor, written and directed by Peter Berg, has a lot going for it—especially for a film released in January, a month typically reserved by film studios for dumping less than stellar product. The movie (which gets a wide release on Friday) is a gripping, uniquely brutal portrait of warfare that dramatizes Operation Red Wings, the failed mission to capture or kill a militia leader in Afghanistan’s Kunar province in 2005.

The film has earned generally positive reviews. It’s a riveting story of American, as well as Afghan, courage. It features solid performances, particularly from Mark Wahlberg as Navy SEAL and lone survivor Marcus Luttrell (the film is based on the book he co-wrote). And the film has received its fair share of support from US servicemembers. For instance, the Army provided four helicopters (two Apaches and two Chinooks, along with their crews) shown in a scene where Army Rangers attempt to rescue the SEAL team, and ex-congressman and Iraq War vet Patrick Murphy introduced and praised the film at a special screening at the US Navy Memorial Heritage Center in Washington, DC, in December.

But earlier this month, the people behind Lone Survivor got the kind of publicity that no studio or filmmaker wants to receive right around the time of their film’s premiere. On January 2, LA Weekly published their investigation into Remington Chase and Stepan Martirosyan, two Hollywood financiers and Lone Survivor executive producers who just so happen to come with the baggage of separate convictions for cocaine trafficking. Oh, and both have them have worked as federal informants, and have gone by multiple aliases. (The LA Weekly also details an allegation the producers faced from a convicted murder who, imprisoned for a violent robbery plot that he correctly suspected Chase had helped expose, sought to convince police Chase and Markosian had hired him to execute a contract killing in Russia. A spokesman for the local US Attorney later said “justice was best served by dismissing the charges.”)  Here’s an excerpt from the incredible story, focusing on the pair’s drug connections:

In May 1993, [Martirosyan] arranged financing and traveled to Costa Rica to check on suppliers. Unfortunately for him, the DEA had infiltrated the suppliers. Over the course of several meetings with an undercover agent, [he] agreed to help transport 800 kilos to St. Augustine, Fla. They agreed that [Martirosyan] would send $200,000 from L.A. to Colombia, and that the cocaine would be shipped from Colombia to Costa Rica and on to Florida. Instead, in September 1993, he was arrested in a St. Augustine hotel room.

In all, nine people were indicted. In Costa Rica, the head of the federal police held a press conference and announced that the group had controlled much of the Costa Rican drug trade, according to an article in La Nación.

Naturally, the producers went into damage control mode. They hired crisis lawyer Howard Weitzman, whose clientele has included O.J. Simpson, Justin Bieber, Marlon Brando, and the Michael Jackson estate. One of Chase and Martirosyan’s pending film projects at the time of this story breaking was the big-screen adaptation of the Hasbro board game Hungry Hungry Hippos.

So this is all terrible news for the producers, and not-so-great news for the movie. Sure, some Hollywood producers have had insane lives, but most of them manage to stay far away from stuff like this. But there’s so far no indication that the negative press has yet to hurt Love Survivor, which has earned plaudits for depicting a true story of survival and remarkable heroism. Advance tickets sales have been strong, and the film is predicted to bring in about $15 million during its first weekend in wide release. (Some have estimated closer to $30 million.) Observers are expecting the picture to do particularly well in red states.

Universal, which distributed Lone Survivor, did not respond to a request for comment, but Army personnel weighed in a bit. “[The bad publicity] is not a concern of mine, and not something that I’m even aware of it,” Ken Hawes, an Army public-affairs officer who visited the filming of Lone Survivor, said. “Our involvement begins and ends when the Army is on the scene during the act of filming,” Lt. Col. Steven Cole, an Army film and television liaison in Los Angeles, says. “We don’t deal with the ins and outs of the industry.”