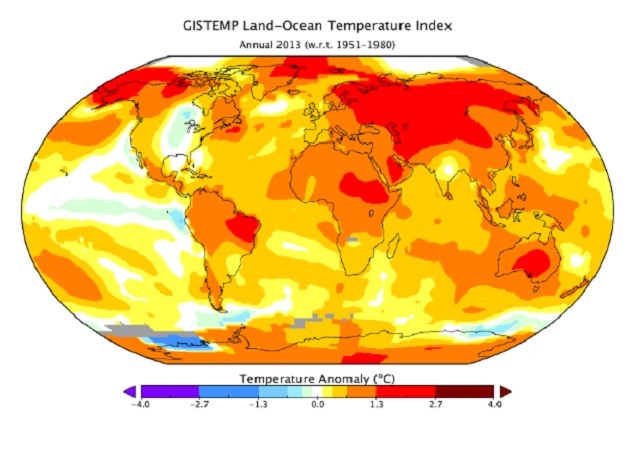 Your anomalously hot planet in 2013.<a href="http://www.nasa.gov/sites/default/wp-content/uploads/files/NOAA_NASA_2013_Global_Temperatures_Joint_Briefing.pdf">NASA</a>

Yesterday, NASA and the National Oceanographic and Atmospheric Administration jointly put the year 2013 in its climate context. It was a very hot one: NASA’s data have 2013 in a three-way tie for the seventh-hottest year in recorded history, while NOAA’s have it in a three-way tie for the fourth hottest. (The gap arises due to slight differences in how the two agencies take into account matters like the warming of the Arctic, where there are relatively few weather stations.)

But those little discrepancies don’t matter that much, explains NASA’s Gavin Schmidt, who is deputy chief of the agency’s Goddard Institute for Space Studies. What really matters is the larger pattern, and here there’s really no disagreement. “The fact of the matter is that the long-term trends are very clear,” says Schmidt.

How clear? NOAA and NASA agree that with the exception of 1998 (the year of a record-breaking El Nino event), every single one of the top 10 hottest years has occurred since the year 2000. They have slight differences in their rankings, to be sure, but on that big-picture question, there really isn’t any daylight between the two agencies. 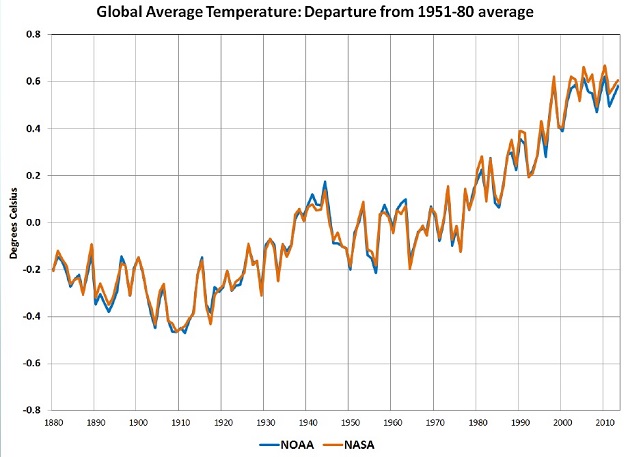 But hasn’t global warming “slowed down“? Schmidt agrees that the rate of warming over the 2000s wasn’t quite as rapid as during the 1990s, something scientists are still working on understanding a bit better. But at the same time, the new analysis shows that the 2000s were considerably warmer than any previous decade. And Schmidt expects the 2010s to be hotter than the 2000s, and so on. And so on.