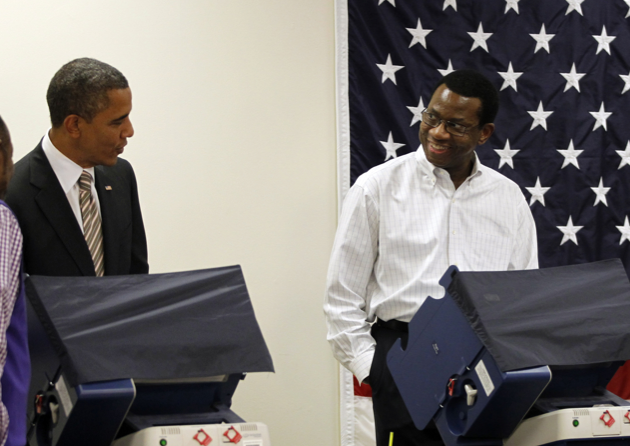 The health insurance exchanges set up under Obamacare are required by federal law to help millions of uninsured Americans register to vote. But the Obama administration is refusing to fully comply with that law, according to two voting rights organizations.

Here’s what the Affordable Care Act (ACA) has to do with voting: The 1993 National Voter Registration Act (NVRA), known as the Motor Voter law, requires departments of motor vehicles and other agencies that provide public assistance to offer voter registration services. The new health care exchanges fall under this requirement, according to the Department of Justice (DOJ) and the Department of Health and Human Services (HHS). The federally run exchange (which was set up to provide a health insurance portal for residents in states where Republican governors refused to establish their own insurance marketplaces) and several state-run exchanges provide a link to the federal voter registration website in their health insurance applications. But the Motor Voter law requires that covered agencies do more than this, and in the case of Obamacare, that means the navigators hired by HHS who walk uninsured Americans through the sign-up process must also offer to guide applicants through the voter registration process. Yet in a letter sent to the White House on Thursday, voting rights groups Demos and Project Vote charge that HHS is not complying with this aspect of the law.

“This looks like [the administration is] running from a political fight,” says Lawrence Jacobs, a political science professor at the University of Minnesota and author of Health Care Reform and American Politics.

Jacobs sees HHS’s decision to not provide Americans full voter registration services through the federal exchange as a capitulation to Republicans. Republicans have been complaining that Obamacare could make it easier for uninsured Americans—who are largely low-income, minority, and young people who tend to vote Democratic—to register to vote. “Republicans are growling, and the administration is running,” Jacobs says. A House Democratic aide notes that the Obama administration “is trying to minimize political vulnerabilities.”

Jacobs notes that “HHS has really dropped the ball…[on] a very important effort to link health reform to political equality.” Obamacare, he points out, has the potential to add millions of Americans to the voter rolls. Over 50 million Americans are not registered to vote. And the 24 million uninsured Americans who are expected to buy health insurance through the exchanges are particularly likely to be unregistered to vote, according to Lake Research, a political strategy research firm.

The letter from Demos and Project Vote urges Obama to ensure HHS fully complies with the Motor Voter law, and it comes a day after the Presidential Commission on Election Administration, which Obama created last year to examine voting problems in the country, issued a report that found that “the election statute most often ignored…is the National Voter Registration Act.” The study calls for increased enforcement of government agencies’ compliance with the Motor Voter law.

Some conservative legal scholars say that the exchanges don’t have to provide voter registration because they offer private insurance and, consequently, don’t fall under the Motor Voter law’s definition of a public assistance agency. But the Obama administration itself disagrees with this argument. It has acknowledged several times that the exchanges are covered by the Motor Voter law generally, though it has not addressed the part of the law that requires the training of navigators. HHS is “ignoring” the law, Slater says.

An HHS spokesperson says the agency is complying with the requirement that voter registration be offered in the exchange application. But he didn’t explain why it is not training navigators to assist voters in the registration process. The White House and the Justice Department did not respond to requests for comment.