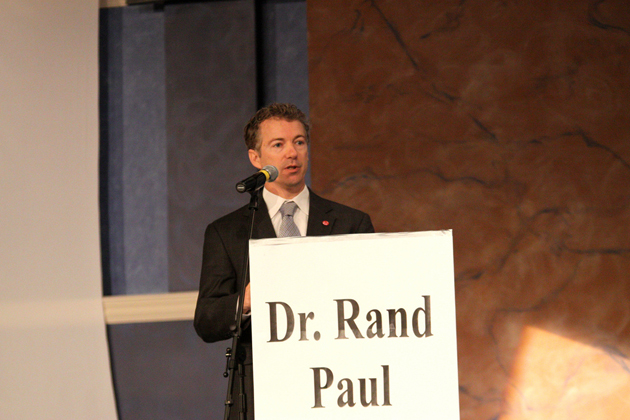 Sunday, during an interview with George Stephanopoulos on ABC’s This Week, Sen. Rand Paul (R-Ky.) told a wild tale about his son’s trouble with Obamacare. Paul claimed that one of his sons (the Pauls have three—William, Duncan, and Robert) was enrolled in Medicaid in Kentucky against his will. The senator briefly flashed a blue-and-white insurance card before launching into a diatribe about his son’s travails: “We didn’t try to get him Medicaid…They automatically enrolled him in Medicaid,” Paul said. “For a month they wouldn’t talk to us because they said they weren’t sure he existed. He had to go down to the welfare office, prove his existence, then, next thing we know, we get a Medicaid card.”

Paul then extrapolated from his son’s experience to make a general point about Kentucky’s health exchange: “Most of the people in Kentucky are getting automatically enrolled in Medicaid.”

Conservative websites latched onto Paul’s claim as the latest example of Obamacare’s failures. There’s one problem, though: Paul’s story doesn’t make sense. No one is being automatically enrolled for Medicaid in Kentucky, says Jill Midkiff, communications director for the state’s health department. “We’re not automatically enrolling people,” Midkiff explains. “People have to actually go and apply.” The Affordable Care Act allowed states to automatically add residents who already receive other social services, such as food stamps and other health programs, to the Medicaid rolls. But Kentucky chose not to take advantage of that provision of the law. The state is notifying some residents of their eligibility for Medicaid, but Paul’s son  would have needed to actually apply for Medicaid in order to receive a Medicaid card.

Midkiff couldn’t discuss the Paul family’s specific troubles due to confidentiality laws. But her general description of the state’s exchange clearly contradicts Paul’s story. When a Kentuckian visits Kynect, the state’s health insurance website, she’s asked to provide basic information about herself—age, location, income, number of dependents, etc.—to determine whether she qualifies for the Medicaid expansion or other insurance subsidies. The website is designed to encourage people who are eligible for Medicaid to apply, but it doesn’t force anyone onto the Medicaid rolls. The applicant would still have to actively choose to enroll in a specific Medicaid plan.

“In general, individuals with income below 138 [percent] of the federal poverty level [about $15,000 for an individual] may qualify for Medicaid coverage,” Midkiff says. “However, individuals at any income level…can still purchase coverage directly from insurers. They can also still purchase through the exchange—they just have to pay full price. They are not required to enroll in a plan through Kynect unless they are enrolling in Medicaid or seeking subsidies.”

Paul’s office didn’t respond to a request for comment.

Here’s a video of Paul’s appearance on This Week: