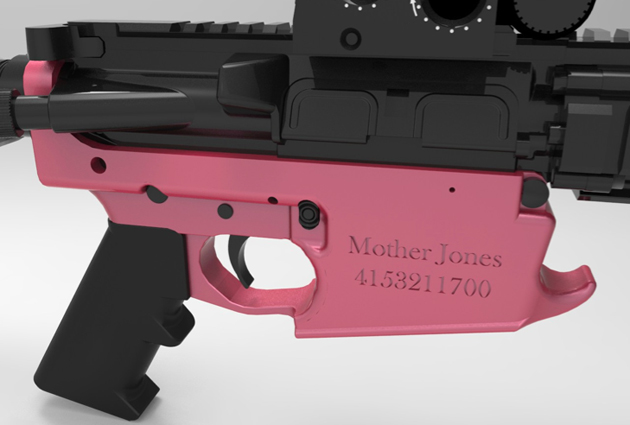 When we published our investigation of gun trafficking on Reddit—including the company’s endorsement of assault rifles emblazoned with its signature alien logo—the story promptly got yanked from Reddit’s popular /r/Politics subreddit. Apparently one of the /r/Politics moderators known as “TheRedditPope” deemed our story “off topic.”*

Lots of Redditors on the /r/Guns subreddit, on the other hand, found the story to be sufficiently political. In response to it they let loose with much talk about liberal “gun grabbers,” the Second Amendment coming under siege, and so forth. But perhaps the most enthusiastic response came from Redditor “WarFairy,” who decided to honor Mother Jones with its very own 3-D printable AR-15 lower receiver, featuring a “raspberry metallic” finish and the company’s phone number. Indeed, the Second Amendment may be in grave danger, but clearly the First is hanging tough.

The dudes of /r/Guns deserve a couple of points for creativity here, though probably no one will accuse them of being super classy.

“I would like to mass print these and hand them out to the kids on Halloween,” declared one commenter. (What a hilarious thing to joke about, especially given that kids and pink guns mix so well.)

“It looks like it has a boner,” said another.

“A glorious pink one,” replied WarFairy, who clarified that the feature in question was “actually a finger hook for use when using a magwell style grip while firing. Just a little design flair of mine.”

Another Redditor saw the feature from a different angle, likening it to female genitals, to which WarFairy replied: “Throbbing… moist… aluring… oh yes… imagine it… imagine running your fingers over it, listening to the whisper… P… Pull my trigger…”

The response to MoJo‘s investigation also included multiple Redditors attempting to list guns for sale in the comments section of our story and then getting their buddies to vote up those comments (a vote-manipulation tactic that Reddit itself forbids). “Now motherjones has become an internet weapons market. TA DA!” one of them said.

Unfortunately, in their careful reading of our report, these folks missed a key distinction between Reddit and Mother Jones: Such postings are a violation of our Terms of Service, and thus have been deleted.

For more of the story behind our investigation, check out my conversation with WNYC’s Anna Sale.

Update, Jan. 22, 2014: In an email to Mother Jones, TheRedditPope said that although he defended the removal of our story in a conversation with a site user who protested the ban, he was not the moderator who removed the story. He described the removal of the story as a group decision: “The moderators act via consensus when a moderator action is questioned and the vast majority of /r/Politics mods agreed that the post was off topic.” He declined to specify why the story was deemed off topic or which other moderator removed the story.