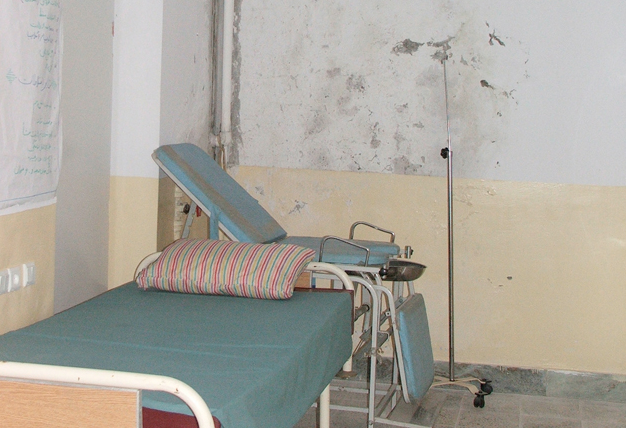 A hospital in Afghanistan’s Parwan province, which cost US taxpayers almost $600,000, is so ill-equipped, hospital staff are washing newborn infants using untreated river water, the Special Inspector General for Afghanistan Reconstruction (SIGAR) reported on Wednesday. SIGAR’s visit, which was conducted in November 2013 (photos here), also found mold and mildew throughout the hospital; a lack of furniture and equipment; a serious risk for earthquake damage; and only enough electricity to operate three light bulbs in the entire facility.

In 2009, a local Afghan contractor, Shafi Hakimi Construction Company, was commissioned to build Salang Hospital as part of a Department of Defense-funded reconstruction program. When a US Forces-Afghanistan (USFOR-A) task force first inspected the hospital when it was under construction in 2012, they determined it had major problems and residents of Salang district wouldn’t have adequate healthcare until they were fixed. In November 2012, the contractor was paid in full. But when SIGAR inspected a year later, it found “the deficiencies identified by the task force had not been corrected.”

NBC News, which recently visited the facility, observed “desperate” hospital staff attempting to administer dental care to a 12-year-old girl—even though they only had access to six pieces of rusty dental equipment. As NBC described it: “The girl was shivering with fear, and began crying after the doctor gave her a shot in her gums. Another man held her still as Sarwy swiftly tilted her head back, opened her mouth and yanked out one of her teeth with a pair of pliers.”

Hospital staff told SIGAR that they are paying about $18 a month of their own money to a neighbor, in order to get enough electricity to operate the three light-bulbs in the hospital. Additionally, SIGAR found that the contractor built the hospital two stories high, instead of one, without authorization from US officials or further study. “The hospital does not serve the medical needs of the people of Salang district as intended and may be a danger to its patients and staff because of the potential for the structure’s collapse in an earthquake,” the report reads.

This account differs sharply with a press release put out by US Forces-Afghanistan yesterday, which argued that despite the SIGAR report, “the facility is currently providing improved medical services” and noted that, “local ministry officials are currently in the process of hiring a surgeon and other staff and have installed a solar power generation unit.” John Sopko, the Special Inspector General for Afghanistan Reconstruction, told NBC, “either no one from USFOR-A has actually visited this facility recently or USFOR-A is living in an alternate reality.”

Mother Jones has reached out to US Forces-Afghanistan to find out when they last visited the facility. According to a January 21 US Army document obtained by Mother Jones, US forces have been unable to conduct a physical re-inspection of the hospital since the SIGAR notified them of their findings on January 3, due to “reduced combat forces [and] threats in the area.” ?