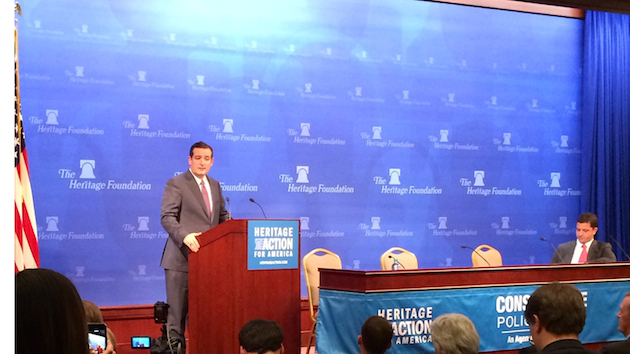 “I almost had a Joe Wilson moment at the last State of the Union,” Rep. Phil Roe (R-Tenn.) said, referencing his colleague from South Carolina who shouted “You lie!” at President Obama during his address in 2009. What had so rankled Roe? Obama saying that the Republican Party was bereft of new policy ideas.

Roe was speaking at a panel on health care reform during yesterday’s Conservative Policy Summit hosted by Heritage Action, a daylong effort to rebut the Democrats’ charge that Republicans lack constructive proposals. Heritage Action, the lobbying division of the conservative Washington, DC, think tank known for creating intraparty strife anytime a Republican strays from right-wing dogma, invited tea party favorites from Congress to present legislation they’ve proposed. Sen. Ted Cruz (R-Texas) sold a bill he’s going to introduce to promote coal and oil projects. Rep. Tom Graves (R-Ga.) talked about a bill to give states more control over their transportation budgets. Sen. Mike Lee (R-Utah) described his bill to bolster for-profit and online higher education. “I think the conservative movement is at its best when it’s all about ideas,” Lee said, noting that a new conservative agenda was overdue.

The event promised “to show Americans what a bold, forward-looking, winning conservative reform agenda looks like.” Yet while the day was full of broad ideological strokes about reforming the federal government and defeating Democrats, the details were lackluster. The speakers failed to mention many of the issues Congress has focused on during the last few years: None of the 10 sessions focused on immigration reform, gun regulation was ignored, and the long-term unemployed were largely cast aside. When an audience member asked Rep. Jim Jordan (R-Ohio), who was there to talk about welfare reform, how the jobless could be brought back to work, he cited Obamacare as the problem. Cruz spent 35 minutes talking about the need to reform energy policy without mentioning climate change—except for a joke about the chilly weather in the capital. “It’s cold. Al Gore told me this wouldn’t happen,” Cruz quipped, to much laughter from the crowd.

Roe, the almost Joe Wilson, was a good example of how lackluster the tea partiers were when it came to policy specifics. A former doctor who entered Congress in 2009, Roe littered his speech with folksy tales and mannerisms. A former OB-GYN, he cracked that he had delivered most of the voters in his district. Roe complained about how his current insurance plan contains pediatric care, even though both he and his wife had been “fixed.” He already had plans for how he’d celebrate the repeal of Obamacare: “I suggest we all join for a massive weenie roast and burn it.”

Cruz spent 35 minutes talking about energy policy without mentioning climate change—except for a joke about the chilly weather in the capital.

His actual proposal lacked that same oomph. Joined by fellow Rep. Tom Price (R-Ga.), Roe pushed the American Health Care Reform Act, which would repeal the Affordable Care Act while largely maintaining the pre-Obamacare system that shut millions out of the insurance marketplace. “Can’t you just tweak Obamacare? Yeah, with a nuclear bomb,” Roe said. He proudly claimed that his bill wasn’t much longer than a Sears, Roebuck catalog—adding that many in the Heritage crowd were too young to know what that meant.

Earlier in the morning, Jordan presented his take on welfare reform as an effort to aid those who receive government assistance by pushing them toward employment, glossing over the structural problems that have left so many people without work after the Great Recession. “You want to get at what causes poverty, it’s disincentivizing work,” he said. Jordan claimed that the “cure” for poverty was pushing people toward jobs, strong families, and free-market principles: “Less work and more help from government is now part of the Democrat platform.” But the extent of his reforms was to cut spending on means-tested programs and adding a work requirement to the food stamp program, a move that would leave millions of the long-term unemployed to go hungry.

Cruz’s energy speech contained the most specific details, and was received by a rapturous, standing-room-only crowd. And those details would gall anyone who considers themselves an environmentalist. Cruz’s bill, the American Energy Renaissance Act, would prevent the federal government from regulating fracking, repeal the current ban on exporting crude oil, and put any future EPA regulation of coal up for a vote in Congress. One of the primary components of Cruz’s bill would be to approve the proposed Keystone XL pipeline. “If you are a Birkenstock-wearing, tree-hugging Greenpeace activist, you should love the Keystone pipeline,” he said.