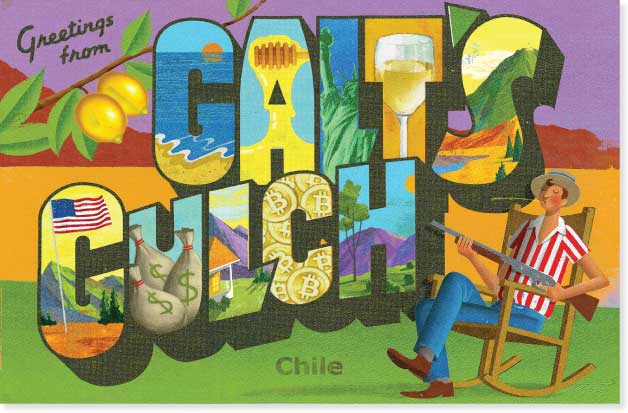 Ken Johnson’s Jeep crests a ridgetop on a dusty track a few miles off the private tollway that connects Santiago and Valparaíso, Chile. He gets out, takes a swig of beer, and gestures at the hardwood forests rising up to the craggy mountaintops. Below, Pacific coastal scrub stretches toward the lemon groves where cooks are roasting three lambs on an open fire. “Look at that, look at how majestic that is,” Johnson says. “That is awesome.”

Welcome to Galt’s Gulch Chile, a libertarian refuge from the coming economic, social, and political collapse of the United States. The would-be free-market utopia, named after the mountain redoubt of the protagonist of Ayn Rand’s Atlas Shrugged, is taking advance payments (Bitcoins gladly accepted) for parcels on its 11,000 acres.

Joining Johnson, the project’s managing partner, are three prospective buyers: a retiree from Oregon, a California-based expert in moving assets offshore, and another retiree who doesn’t want to give much in the way of personal data. “Oh, the NSA’s here too?” he says the first time he sees my audio recorder. The men talk of a coming financial meltdown caused by the Federal Reserve, followed by a Homeland Security police state. They’re ready to get out with their silver, guns, and organic honey—but not quite ready to sacrifice fast internet, access to an international airport, and a time zone convenient for Skyping with the doomed sheeple back home. Throw in low taxes, privatized social security, and a Mediterranean climate, and you have Chile.

Freedom Orchard doesn’t have an ideological litmus test for residents, but liberals are not welcome: “You’ve already messed up your country. We don’t need you.”

Down at a ranch house in the valley, we join Galt’s Gulch Chile’s top promoter, Jeff Berwick, who’s mingling with dozens of investors and potential customers. Acre-and-a-quarter lots start at $48,500. Berwick writes the Dollar Vigilante financial newsletter and appears frequently on investment talk shows, telling people to get out of North America ASAP. “I expect a complete monetary system collapse in the next 5 or 10 years,” he told Canada’s CBC. He’s dressed in a natural linen jacket, his short hair gelled back, a glass of organic sauvignon blanc in one hand, a Marlboro in the other. He says he has three driver’s licenses from three different countries in his pocket. “I can’t believe people think they need permission to drive. Or permission to do anything,” he says. He also helps clients get second passports; he says he carries one from his native Canada and another from a Caribbean nation. “I’m just a citizen of the world,” he says.

If Galt’s Gulch isn’t your scene, Freedom Orchard is right next door. Its founder is John Cobin, a genial expat who cranks out an endless stream of articles, op-eds, and episodes of his Red Hot Chile podcast in which he extols the country’s low taxes, rigid anti-abortion laws, and traditional gender roles. Cobin ran for Congress in South Carolina in 2006 but was arrested for domestic violence days before the vote. (The charges were dropped.) His vice president of international sales, an organic farmer named Frank Szabo, lost a race for sheriff in New Hampshire in 2012 after saying he wouldn’t rule out use of deadly force against abortion doctors. He later apologized and said he abhors violence.

Sitting in his impeccable contemporary apartment in Santiago, Cobin says that while the proposed 400-unit Freedom Orchard doesn’t have an ideological litmus test for residents, liberals are not welcome: “You’ve already messed up your country. We don’t need you.”

But neither Cobin nor Berwick came up with the idea of promoting Chilean real estate as a refuge for freedom-loving gringos; that distinction goes to a mysterious newsletter writer who goes by the name Simon Black. His Sovereign Valley Farm is located in the rolling wine country south of Santiago, and a conference he organized in the capital last year drew libertarian luminaries including former Rep. Ron Paul. “There’s going to be a whole lot more chaos yet to come,” Paul told the attendees. “It will be a worldwide phenomenon; the States won’t escape it either.”

The leaders of these libertarian enclaves get along as well as might be expected. Cobin gets agitated at the mention of Johnson and Berwick. “Galt’s Gulch Chile is my name—they stole it from me,” he says. “They are despicable scoundrels.” Johnson has accused Freedom Orchard of making “complete misrepresentations.” Black has told potential clients that one of his competitors’ sites is “unsuitable for a development.”

The projects’ timelines are vague. Black’s Sovereign Valley Farm is on hold. Cobin says Freedom Orchard needs more capital before it can really get off the ground. And Galt’s Gulch Chile still needs to turn in paperwork and pass an environmental review process that will take at least six months.

Should any of these schemes become reality, residents adapting to life in Chile may be in for a big surprise. When I remind Cobin that his adopted country features some of his least favorite things, such as strict gun laws (not to mention national ID cards, mandatory medical insurance, and a reelected socialist president promising free college for all), he’s unfazed. “The seeds of Chile’s destruction have already been sown,” he replies. “That’s true. But we’re 50 years behind the US.”