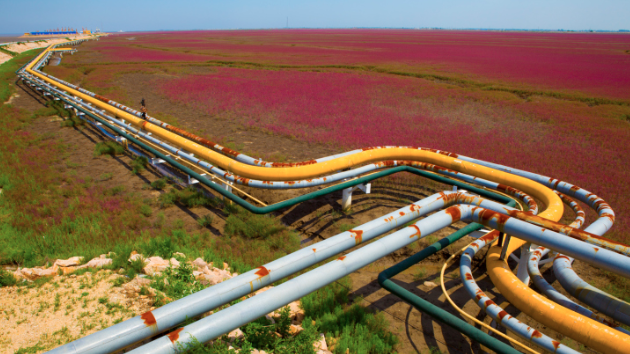 For decades, the Environmental Protection Agency has underestimated US emissions of methane, a greenhouse gas that is 30 times more potent than carbon dioxide. That’s the argument of a new analysis appearing in the Feb. 14 issue of Science, which also finds that a big factor behind the lowball estimates is the EPA’s poor grasp of methane leaks from the natural gas industry.

The analysis, which examines more than 200 existing studies, is the first to take a broad view of scientific knowledge of methane emissions, and it has critical implications for the use of natural gas. Gas has been touted by its proponents as a cleaner alternative to traditional fossil fuels such as coal—President Obama hails it as a “bridge fuel” that will allow the country to transition to cleaner energy sources—since burning natural gas for energy emits far less carbon dioxide. But because methane, a main component of natural gas, is such a powerful greenhouse gas, the new evidence of narrows the gap between the climate change contributions of gas and coal.

“Our best guess is that methane emissions in this country are about 50 percent more than the EPA [estimates],” says Adam Brandt, an assistant professor of energy resources engineering at Stanford University and the lead author of the analysis. Methane emissions could plausibly be anywhere between 25 to 75 percent more than what EPA measures have shown, Brandt adds. “That amounts to something like 7 to 21 million excess tons of methane every year.” Brandt and his co-authors, he says, did not have enough evidence to determine what proportion of total excess methane is released by the natural gas industry, as opposed to by other energy sectors, agriculture, or landfills.

But the study concludes that natural gas as a fuel source still contributes less to climate change than coal. “We don’t believe that the evidence suggests that burning coal is better,” Brandt says. “There’s just not support for that.” The reason is that while methane is the more damaging greenhouse gas, carbon dioxide, which coal emits in huge quantities when burned, stays in the atmosphere for a much longer period of time. Coal is a “cleaner” fuel only in the near-term—a period of 20 years or so. Brandt says that over a period of 100 years, natural gas—leaks and all—would still be a less greenhouse gas-intensive source of energy than coal.

The analysis also concludes that even under the most conservative estimates of methane leaks from the gas sector, keeping diesel-powered powered vehicles, such as buses, on the road contributes smaller amounts of greenhouse gases to the atmosphere than switching to gas-powered buses.

The researchers believe that only a small percentage of methane leaked by the gas sector is coming from the controversial hydraulic fracturing—or fracking—process itself. Rather, accidental leaks that occur as the industry moves and processes natural gas likely account for the biggest proportion of these emissions. One study cited by the analysis found that less than 1 percent of individual pieces of equipment at a single natural gas plant were responsible for nearly 60 percent of its leakage. Brandt says new technology that quickly identifies these “superemitters” is the best hope for reigning in the industry’s emissions.

As for why the EPA underestimates methane leaks in the gas industry, the analysis notes that the agency can only measure emission rates at wells and plants where the operators volunteered to allow the EPA on site. In one instance, the EPA asked 30 natural gas companies to allow them on site, but only six cooperated.