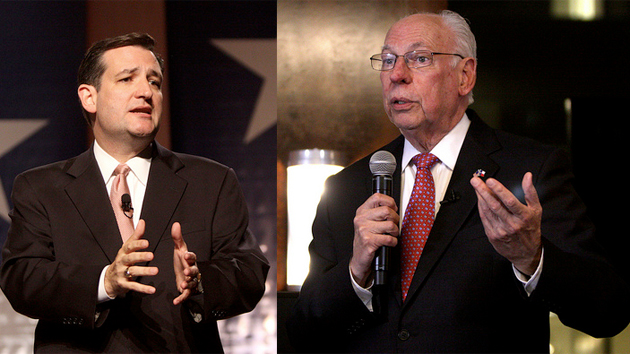 Last October, Sen. Ted Cruz’s father, Rafael, was thrust into the spotlight when Mother Jones revealed that the septuagenarian businessman-turned-pastor had made a series of inflammatory remarks during several speaking engagements. These comments included the assertions that the United States is a “Christian nation,” that President Barack Obama is an “outright Marxist” who seeks to “destroy all concept of God” and should be sent “back to Kenya,” and that “social justice is a cancer.” At the time, Sean Rushton, a spokesman for Sen. Cruz, a Texas Republican, said, “Pastor Cruz does not speak for the senator.” But documents obtained by Mother Jones show that an aide to the senator serves as a scheduler for the elder Cruz and books his speaking gigs, including those for which Rafael Cruz might be paid.

When an activist, who has asked not to be identified, requested Rafael Cruz’s presence at an event, Lela Pittenger, a Ted Cruz aide, replied and forwarded a three-page “Pastor Rafael Cruz Event Request Form.” Pittenger, according to 2013 Senate records, was a regional director on Cruz’s Senate staff. She made $48,666 in salary working for Ted Cruz in the first nine months of last year. Her Facebook page identifies her as the Central Texas regional director for the senator and notes she lives in Austin. (In 2012, she ran against Ted Cruz in the Republican Senate primary as a “Rand Paul Republican”; she received 1.28 percent of the vote.)

Rushton says that Pittenger is now a full-time staffer for Ted Cruz’s campaign operation. But Pittenger, according to Cruz’s Senate office in Austin, was part of his Senate staff until last month, and a message posted on Rafael Cruz’s Facebook page last November (when Pittenger was on the Senate payroll) refers to Pittenger as the senator’s aide who books Rafael Cruz’s appearances. Brenda Cash, president of Republican Women of Yoakum in Texas, tells Mother Jones that when she booked Rafael Cruz for a November speaking gig with her group, she did so through Pittenger. “I happen to know [Rafael Cruz’s] scheduler,” she says. “I spoke to Lela Pittenger…She was working for Sen. Cruz.”

The “Pastor Rafael Cruz Event Request Form” Pittenger sent to the activist asks a series of questions. Who will introduce Pastor Cruz? Will a podium be provided? Who will be in the audience? Will VIPs or members of the media attend? Will expenses be covered? It also asks, “Does the organizing group normally provide an honorarium to speakers? If yes, what is the expected honorarium for Pastor Cruz?”

There are strict—and sometimes complicated—rules governing how Senate and political campaign funds can be spent, and Pittenger’s role as Rafael Cruz’s scheduler raises obvious questions. Did she handle his scheduling details—which might have included booking him paying gigs—while on the Senate clock? If so, would that be an improper use of her time? A lawyer with expertise on congressional ethics, who asked not to be identified, says, “If this activity used Senate resources—Senate phones, space, email, or time—then it’s likely a problem, because this is not official Senate activity.” But this attorney notes that a Senate staffer is allowed to do work for his or her boss’s political campaign (without using Senate resources), and it is possible that scheduling Rafael Cruz’s speeches could be deemed a campaign-related duty. Federal election rules do prohibit the personal use of campaign funds—and helping the parent of a candidate obtain paid speaking engagements could be considered  a personal matter. But one election law expert (who also asked not to be identified) points out that Cruz’s campaign could argue that Rafael Cruz’s speeches—during which he usually hails his son’s political work—benefit the campaign and that it would not be inappropriate to spend campaign funds to book his appearances, even if they are for-profit appearances.

The form also asks, “Does the organizing group normally provide an honorarium to speakers? If yes, what is the expected honorarium for Pastor Cruz?”

Asked if it was appropriate for Pittenger—as either a Senate aide or a campaign staffer—to be handling Rafael Cruz’s speaking engagements (paid or otherwise), Rushton issued this statement: “Lela schedules events for Rafael Cruz, who is 74 years old and not wealthy, when he is speaking on behalf of Sen. Cruz as a surrogate. Rafael receives many speaking requests and Lela reviews them to determine which ones are surrogate appearances and which ones are not….Lela has assisted Rafael Cruz only with non-Senate equipment on non-Senate time.”

After Rafael Cruz was criticized last fall for his birther remark and other incendiary comments, Ted Cruz did not stop facilitating his speaking engagements. (He dismissed his father’s harsh comments about Obama as merely a “joke.”) And Rafael Cruz did not throttle back. In November, he spoke to a tea party/religious right group in Tulsa, Oklahoma, and contended that Obama was “brainwashed for 18 years” by the Reverend Jeremiah Wright to accept liberation theology, which Cruz defined as a “mixture of leftist, ultra-leftist, pseudo-Christianity with Marxism.” He declared Obama a “tyrant” and maintained that the Environmental Protection Agency and the Department of Education are both “unconstitutional.” He repeated his contention that “social justice is another cancer,” and he said, “You want to eliminate school massacres, have the teachers carry.”

In a sermon at an Athens, Texas, church—which was posted on YouTube in December—he referred to gays and lesbians as “a group of sexual deviants…driving the political agenda in this country.” He asserted once more that the United States is a “Christian nation.” Speaking to tea partiers in Fairfield, Texas, in January, Rafael Cruz insisted that Obama was indeed setting up death panels, calling them “another tyrannical dictatorship with no control by anyone.” In a speech to another group of Texas tea partiers that was posted in February, Rafael Cruz denounced “most Christians and pastors” for reading the Bible “with a pair of scissors in their hand”—that is, not accepting the full and literal truth of the holy book. He decried Christian denominations “that were not created by Jesus.” He celebrated the fact that he has been criticized: “If nobody’s persecuting you, you’d better check your walk, because you’re probably not having any influence upon society.” And he called for theology-based politics: “We don’t need to be politically correct, we need to be biblically correct.”

Rafael Cruz routinely blends the fundamental rhetoric of the religious right with the sharp language of the most extreme Obama critics who claim the president is illegitimate and a danger to the nation. And Sen. Cruz has regularly used his father as an emissary to the Christian right and tea partiers in Texas and elsewhere. During 2012 and 2013, Cruz’s campaign paid for about $10,000 of Rafael Cruz’s traveling expenses.

A senator is not accountable for his parents’ actions and remarks. Rushton says, “Of course, Sen. Cruz loves his father dearly and agrees with much of what he says, but as he stated last fall, Rafael does not always speak for the senator nor does the senator agree with him in every circumstance.” But if a senator’s aide is booking his father’s speaking engagements—and doing so because he is a surrogate for the senator—the senator certainly bears responsibility for the message that is spread. In this case, it seems that Ted Cruz believes that enabling Rafael Cruz so he can slam non-fundamentalist Christians and assail Obama as wicked is good for the family business.