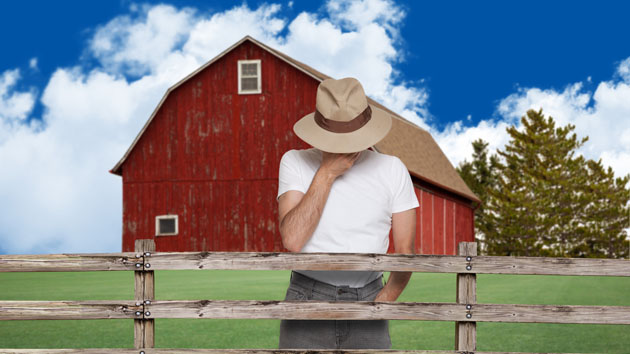 He'll never recover from Bruce Braley's attack on his way of life. <a href="http://www.shutterstock.com/pic-170166599/stock-photo-sad-farmer.html?src=t7Ayw47jkwkdSyvOdVZKOg-1-1">Carlos Yudica</a>/Shutterstock

Republicans took a page from the Mother Jones playbook Tuesday and uncovered video of a politician speaking a bit too freely at a private fundraiser. The New York Times‘ Nick Confessore was quick to dub it “47%”-like. American Rising, an opposition research PAC founded by Mitt Romney’s former campaign manager, released a video of Rep. Bruce Braley (D-Iowa), the Democrats’ likely candidate for Iowa’s open Senate seat this year, speaking before a crowd of lawyers at a fundraiser in Texas. Braley, himself a lawyer, disparages Sen. Chuck Grassley (R-Iowa) for being just a “farmer from Iowa.”

The nerve! How dare someone running for office in the heartland question the credentials of a farmer! Yet when it’s presented in its full context, Braley’s statement offers a valid critique: Grassley lacks a law degree and, should Republicans retake the Senate this fall, he’d be first in line to chair the Judiciary Committee. Here’s the full quote:

The horror! A lawyer touting his shared credentials before a room of fellow lawyers! And he wasn’t just puffing up his audience: Grassley taking over the influential committee truly would be unprecedented. As the Daily Beast‘s Ben Jacobs points out, every single senator who has chaired the committee (dating back to 1816) has been a lawyer.

But the media couldn’t help itself, pouncing at the slightest whiff of a gaffe. “Despite Iowa’s centrist tendencies, Braley is heavily favored to win, and wasn’t considered a major pickup opportunity for Republicans,” a National Journal reporter wrote. “That may change now, thanks to this video.”

Political reporters (those at Mother Jones included) always salivate at the opportunity to catch a politician speaking this openly. To be sure, Braley probably would have worded his statement a bit more tactfully if he’d known it would become public. His quote alone should be a whole bunch of nothing sauce, worth a a light chuckle and then forgotten. Instead, this clip is proving particularly enticing for another reason: It allows pretentious East Coasters to lapse into lazy stereotypes about how the middle of the country lives.

Too many pundits see Iowa is a rural landscape only dominated by farms, a one-industry state full of yokels who spend too much time with their pigs and are offended by any slight to their 1950’s vision of Americana. “Big unforced error on Braley’s part,” NBC’s Chuck Todd tweeted, “not just elitest [sic] but un-Iowan to attack another Iowan the way he did.” Other reporters used it as a chance to quip about how much Iowans love their corn: 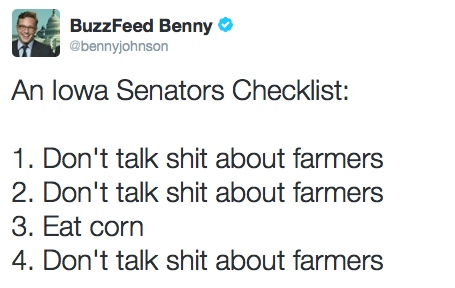 Agriculture certainly plays a larger role in Iowa than many parts of the United States. But less than 5 percent of the state population actually farms, according to the Iowa Farm Bureau. The insurance industry accounted for a little shy of 3 percent of the state’s jobs in 2007, yet one never hears about the need for Iowa politicians to bow down to the cultural importance of insurance agents. Contra the standard trope of the state as mostly rural, a majority of Iowans (64 percent) live in urban areas. The Des Moines metro region alone contains nearly 600,000 people, about 20 percent of the state’s entire population. Iowa’s a microcosm of the country, which is largely suburban and urban place but romanticizes its agrarian roots.

As farming techniques modernize, requiring fewer hands on the field, the state’s population becomes less tied to farm life with each passing generation. I can vouch for this: My paternal grandparents grew up on farms outside Fort Madison, Iowa. My grandparents moved into town as adults and gave up on farm life. My family lived there for a few years when I was a kid. We eventually moved up to Minnesota, but my dad still talks about one day returning to—what a coincidence!—practice law in Iowa. I returned to Iowa for college, sticking around for an extra year to cook in the kitchen of a small-town bar and write for a community newspaper. I’ve never spent a day working a farm and would be utterly lost if you asked me to milk a cow or detassel a stalk of corn.

Sure, Iowa politicians shouldn’t talk smack about the farmers in their state. But the media shouldn’t fool itself into thinking it’s replicating Iowa nice when it falls back on lazy tropes.