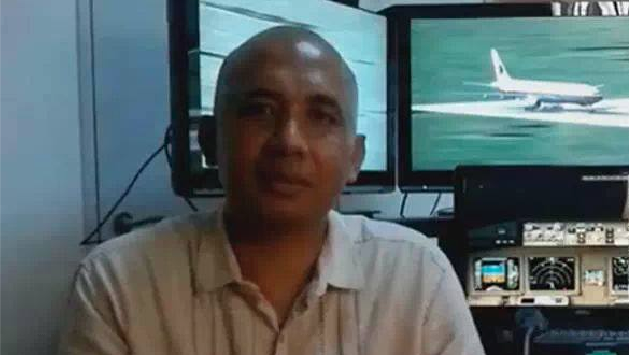 On Tuesday, senior US officials reported that Malaysia Airlines flight 370, which has been missing since March 8, was diverted using a computer system that was most likely manipulated by someone in the cockpit of the plane. The news doesn’t discount the theory floated by Wired that an electrical fire forced the pilots to divert their course. But it has increased the scrutiny surrounding the plane’s captain, 53-year-old Zaharie Ahmad Shah, and first officer Fariq Abdul Hamid, 27, whose homes have been searched by Malaysian authorities.

There has been much speculation recently about Shah, from his Muslim religion—friends say he was not especially committed to it—to his support for Anwar Ibrahim, the leader of Malaysia’s popular opposition party. A Malaysian court convicted Ibrahim of sodomy charges on March 7, the day before the flight disappeared, a charge his supporters contend was trumped up by Malaysia’s ruling party. Some have theorized that Ibrahim’s conviction was possibly a motivating factor in the plane’s disappearance. There’s a lot of conflicting and erroneous information about Shah out there (for instance, it appears he did not attend Ibrahim’s trial, as has been reported), but a Facebook page that appears to belong to the aviator provides some useful insight into his politics and interests.?

The page was taken down sometime on Sunday or Monday, but reappeared late Tuesday afternoon. (Facebook would not comment on the record about why Shah’s account went dark. The social-media company generally removes accounts if they’re reported for violating its Community Standards, or if they are subject to a series of unauthorized login attempts.) Mother Jones consulted with five Malaysian speakers to translate some of the posts and comment threads, which in a few cases include words like “terror” and “extremist” that turn out to be far less inflammatory than they appear to English-speakers. Shah’s Facebook page shows that he was, not surprisingly, a flying enthusiast who posted a photo of a flight simulator that he built and was upgrading. As Quartz notes, Shah’s digital footprint also suggests that “he was far from being a religious fanatic. If anything, he seems to have veered towards atheism.” A YouTube channel associated with Shah includes several videos on the subject.?

Here are some noteworthy posts from Shah’s Facebook page:

One day after the Boston Marathon bombing, Shah offered his condolences to victims of the attacks.

In the post below, Shah is commenting on an article in which Taib Mahmud Ibrahim, the former chief minister of the Malaysian state of Sarawak—whom the NGO Global Witness accused of supporting corruption in the logging business—is accusing Anwar Ibrahim of working with the NGO to spread the corruption allegations. According to USA Today, Shah is one of many Malaysians who supported opposition to the National Front coalition, Malaysia’s dominant party that has ruled the country for decades. Shah reportedly campaigned for Ibrahim, who is free pending his appeal. According to Slate, Ibrahim is a “nonviolent man who supports a pluralistic and democratic Malaysia.” Human Rights Watch contends that the sodomy charges against him were “politically motivated persecution” and the government wanted to remove Anwar “by hook or by crook.”

According to the translators, the comments above the article (in light gray) say: “@anwaribrahim is guilty again? Taib, you rule Sarawek, you distribute licenses, you conduct deforestation, you are rich, yet Anwar is guilty, my oh my.” Four of five Malaysian speakers consulted by Mother Jones said that when Shah uses the term “terror,” he is actually using a Malaysian slang term for amazing (i.e., “Anwar is amazing!”). As one translator explained, the expression is “most likely in a sarcastic manner, saying that Anwar is so amazing, that he can do what the article claims he has done.” Another translator agreed that, he’s sarcastically remarking how “‘terror’ clever or amazing, or how smart Anwar Ibrahim is, to be honoured with such baseless accusations!?” The fifth speaker says that the phrase can be interpreted as: “True terror, this Anwar!” but that he’s “trying to be sarcastic.” 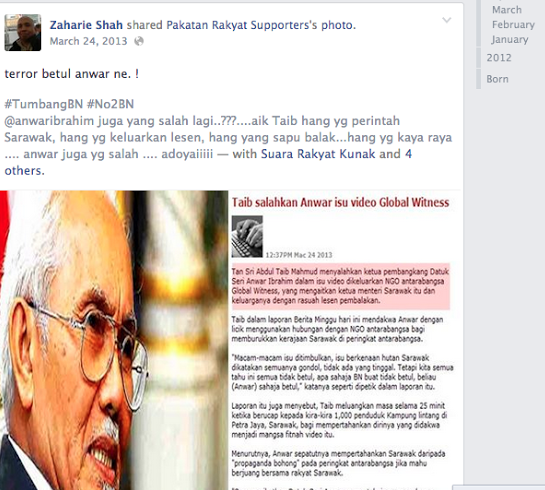 Here’s another post where Shah expresses his displeasure with the ruling party: 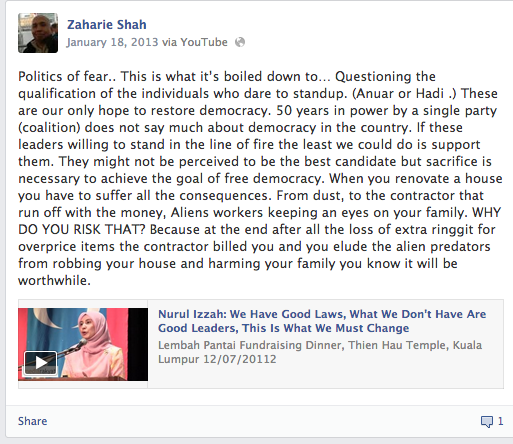 In another post, Shah says: “Najib, together with Datuk Seri Ridzwan Sulaiman, are those that the authorities are looking for…Lahad Datu, [a town in Malaysia.]” Najib Razak is the prime minister of Malaysia. Datuk Seri Ridzwan Sulaiman is a man that was being sought by Malaysian authorities last year in connection with funding hundreds of radical militants from the Philippines who terrorized villagers in Lahad Datu in February 2013—a few months before Malaysia held elections. As one translator explains, some Malaysians felt that the incident was a plot by the prime minister to flex power in the region, whose citizens are not sympathetic towards the ruling party. 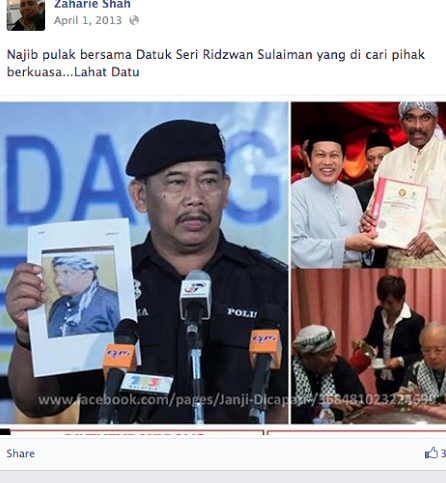 Here, Shah says that this is the last session on his flight simulator with his instructor, Captain Zainal, before he is going to upgrade his PC. The flight simulator seized from Shah’s home is reportedly being investigated by authorities, although American investigators have not yet been given access to it. 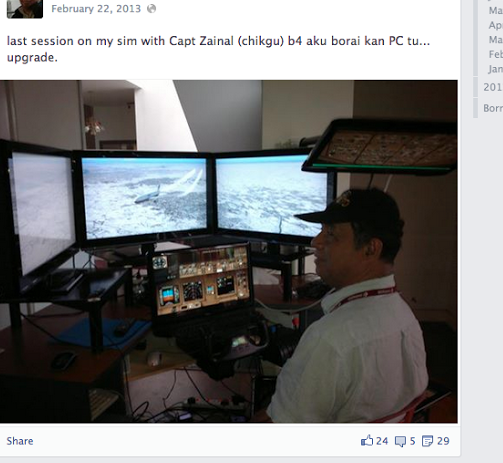 According to the translators contacted by Mother Jones, the exchange below translates to the following:

Shohimi Harun (an aviator for Malaysia Airlines): How much GPU needs to be installed?

Shah: Depends on how much is one’s obsession. One is enough for starters, I’m a SIM extremist. Heheh.

Shohimi Harun: Extremist, okay, as long as you don’t become a terrorist. 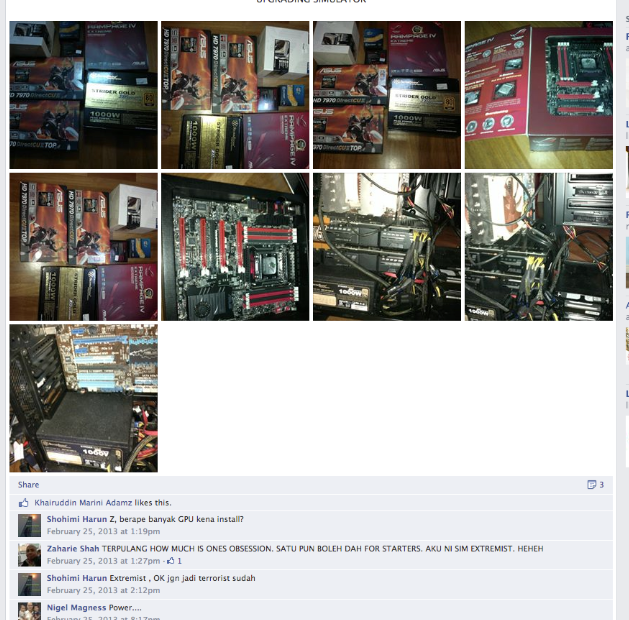 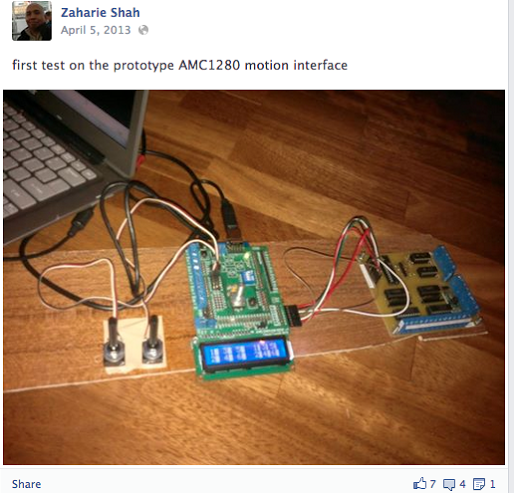 As Quartz notes, “Shah’s Facebook page is filled with images of him whipping up meals and eating them with his family. He seems to have been especially fond of noodle dishes, and his pictures suggest that he experimented with creating his own concoctions.” 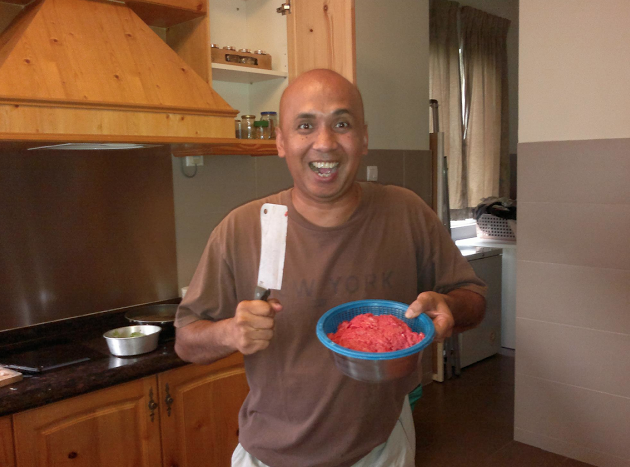 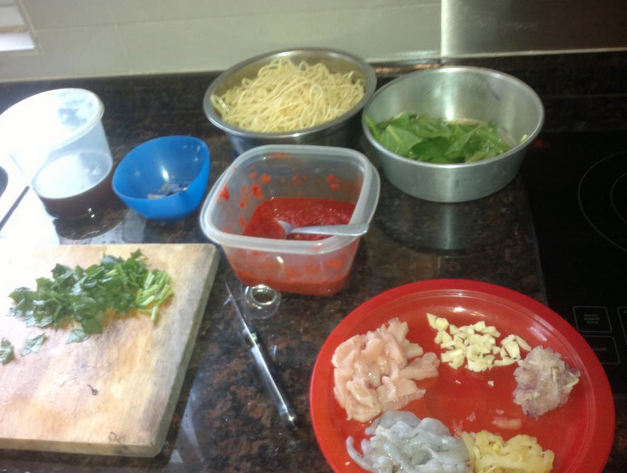