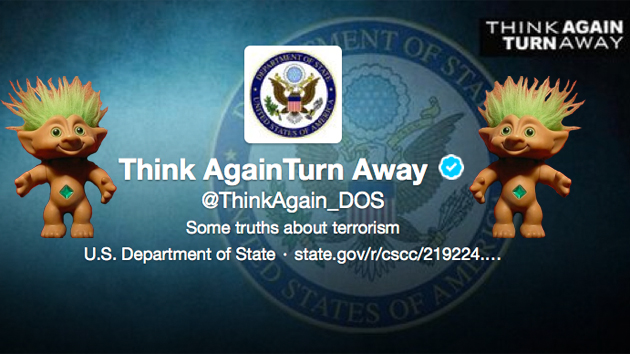 Here’s one way the US government is trying to combat terrorism without the use of controversial explosions. A tiny portion of your tax dollars—just a few million dollars annually—is funding the State Department’s trolling of jihadists on Twitter.

One of the State Department’s official (and verified) Twitter accounts, called “Think AgainTurn Away” and going by the handle @ThinkAgain_DOS, is devoted to speaking “some truths about terrorism” online. If you follow the account, you’ll notice that this truth often manifests itself in the form of the State Department directly tweeting at Islamists and their supporters in English, and countering their beliefs.

This kind of thing isn’t unusual for the State Department. The Center for Strategic Counterterrorism Communications was established in 2010 to coordinate messaging to target violent extremism on the internet, especially that of Al Qaeda and affiliates. CSCC (an interagency center that is housed at State) initially focused on non-English online forums where the State Department saw jihadists attempting to recruit and raise money (message boards, comments on Al Jazeera Talk, etc.) Late last year, CSCC made a move into English-language websites, with the small team of analysts and microbloggers expanding their fight on Facebook, YouTube, Twitter, and elsewhere, under the banner of the US State Department. @ThinkAgain_DOS is just one of their tools in this digital-outreach turf war. (CSCC has used the phrase “Think again. Turn away” on other online posts.) Here’s a sample:

.@NasserJan2 You can best show your sincerity by not murdering women and children with suicide bombers #thinkagainturnaway

.@s7bhijratain teaching small, innocent children how to kill & get killed isn’t Jihad. Where is your moral judgment? #thinkagainturnaway

.@AlNusrah Do they know why #alqaeda is killing them while selling oil to #Assad? #thinkagainturnaway

(Here is the context for the Al Qaeda-Assad oil accusations.)

“Given the audience, and the sensitivity of the subject matter, [the State Department has] to be very careful when you put any kind of message out into the world,” says Will McCants, a former State Department senior counterterrorism adviser who helped set up CSCC’s digital outreach; he is now a fellow at the Brookings Institution. (The State Department’s current digital-outreach team was not available for comment on this story.) McCants describes the digital pushback initiative as his “baby,” and he made sure to get the right people involved (good linguists, for instance). “The US government has to contest these kinds of [jihadist] messages, because what was happening prior to this was nothing,” he says. “Recruiters would recruit with impunity. When I started, the thinking was, ‘We don’t dignify this stuff with a response.’ Well, that makes sense if you’re President Obama or secretary of state. That’ll just drive traffic to it. But at least this way, we’re offering some American perspective and shooting down some of the more egregious examples. It’s targeted at blunting the recruitment pitches online.”

Not everything sticks the landing, of course. The State Department’s YouTube spoof of Al Qaeda propaganda videos was widely seen as a flop. You can watch it here:

Furthermore, a 2012 study on US digital outreach, published in The Middle East Journal, stated that efforts were doing little to alter the tone of anti-American conversations on the internet in the Middle East. (Four percent of posts expressed positive views of the outreach, and 4.8 percent expressed positive views of American foreign policy.) But the effectiveness of these programs is tough to gauge, and nobody is under the illusion that this sort of outreach and communication is going to vanquish terrorism on its own.

“If you’re talking about would-be extremists reading a tweet and turning away from violence as a result, it’s hard to tell how much that is happening,” McCants says. “So if you measure success that way, it’s hard to know. But you can demonstrate that this kind of effort has gotten into the heads of senior leadership. With al-Shabaab, for instance, leaders issued a directive saying not to interact with the State Department accounts because they spread lies about the mujahideen. Things used to be the other way, with [US officials] talking about how jihadis were so good at messaging against the US. It’s nice that we’re starting to have this turnaround.”