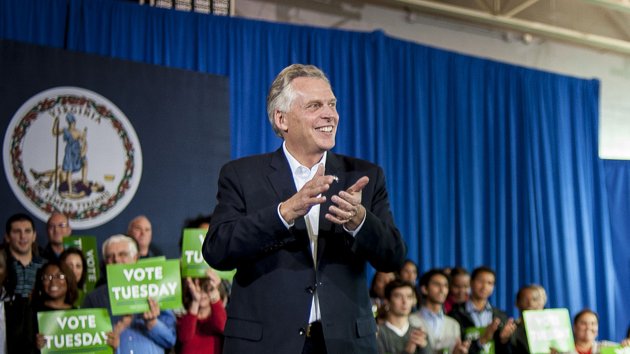 In February, when Arizona state lawmakers passed a bill allowing business owners to refuse service to gay and lesbian customers on religious grounds, a ferocious national backlash forced Republican Gov. Jan Brewer to veto the legislation. But while Arizona legislators were catching heat, controversial “conscience clause” legislation quietly glided to passage in Virginia and was signed into law by Democratic Gov. Terry McAuliffe. Now, certain health care providers in Virginia have the right to turn away gays or lesbians or to withhold test results that could cause a patient to consider terminating her pregnancy.

The law, the product of two highly similar bills signed by McAuliffe on February 20 and March 20, establishes new rules for licensing genetic counselors. These are the health care professionals who help couples assess their odds of parenting a child with a genetic disorder, test individuals for genes indicative of disease, or detect fetal anomalies after a woman becomes pregnant. Genetic counseling is a fairly new field that was not previously regulated in Virginia, as is the case in many states around the country. Critics of the new law say they support oversight of the profession, but they strongly object to the law’s “conscience clause” provision, which, in the words of the ACLU of Virginia, gives counselors “a license to discriminate.”

“This is Arizona-lite,” says Tarina Keene, the executive director of NARAL Pro-Choice Virginia. She and other opponents point out that the law not only gives genetic counselors the right to refuse to help gay, lesbian, or unwed couples, but it also frees them to withhold a patient’s test results if the counselor suspects the information might lead her to have an abortion—although they cannot lie about the results. “The way the law is written, if a genetic counselor doesn’t think a patient will make ‘the right choice’ with the information you give them, well, then you don’t have to tell them,” says Claire Guthrie Gastañaga, the executive director of the ACLU of Virginia.

The law does require genetic counselors who refuse their services to provide a list of alternative counselors. But it does not specify in what timeframe they must produce that list. In a March 10 letter to McAuliffe asking him to veto one of the bills that created the law, the ACLU noted that the measure shields counselors from lawsuits in cases where they have discriminated against patients—even when their actions may have caused someone physical harm.

The law’s detractors charge that the conscience clause is yet another means to chisel away at abortion rights in Virginia. Keene notes that the law’s architects relied on conscience clause language drafted by the Family Foundation, Virginia’s largest anti-abortion-rights group. The original clause read, “Nothing in this chapter shall be construed to require any genetic counselor to participate in counseling with respect to abortion.”

Later, the language was modified to give genetic counselors even broader rights of refusal. The law now reads, “Nothing in this chapter shall be construed to require any genetic counselor to participate in counseling that conflicts with their deeply-held moral or religious beliefs.”

For pro-choice activists, the new law is more than just another intrusion on reproductive rights. It represents a betrayal by McAuliffe. In 2013, when McAuliffe ran for governor against ardent abortion foe Ken Cuccinelli, abortion rights groups worked vigorously to help elect him. They believe McAuliffe owes them for generating high turnout among women voters who were disillusioned with the state’s abortion-obsessed Republicans. (One notorious measure that originated with the Virginia GOP would have required women to undergo transvaginal ultrasounds before obtaining an abortion.) McAuliffe’s signature on the bills signals that reproductive rights groups have less clout than they expected following his victory.

“We’re extremely disappointed. We brought people power to that election. There was a 13-point gender gap” in favor of women, says Keene. “And you know why they were voting that way. We were hoping that this would be a new day, and our pro-choice partners at the legislative level would take this opportunity to do some proactive work.”

“For so many of our friendlies to run campaigns centered on reproductive rights, and then turn their backs on people who really helped them—we were dumbfounded.”

Instead, the bills passed both houses of the Legislature with little debate and unusual speed. In the Senate, the champion of the conscience clause was state Sen. Janet Howell, a Democrat who had previously earned a reputation as a fierce abortion rights defender. Throughout January and February, Howell rebuffed several attempts by the ACLU and NARAL to weaken the Senate bill’s conscience clause by amendment.

When Keene and her colleagues expressed their surprise to Howell’s office that she was promoting a conscience clause written by the conservative Family Foundation, Keene says, Howell’s legislative assistant responded, “You don’t always get to be at the table.” Howell’s office did not respond to requests for comment.

McAuliffe’s policy staff did work with NARAL and the ACLU throughout February to write an amendment weakening the conscience clause. But while his staff and the two advocacy groups were still negotiating on that language, the House version of the licensing bill passed both chambers of the Legislature and McAuliffe signed it into law. Two weeks later, the governor offered the ACLU’s amendment to a redundant version of the bill in the Senate, where it was rejected. Last Thursday, McAuliffe signed the Senate bill without the weakened conscience clause.

A spokeswoman for McAuliffe says his staff “tried everything” to assuage the concerns that NARAL and the ACLU raised. But after his amendment was rejected, she says, McAuliffe decided that the necessity of regulating genetic counselors was too great not to sign the bills.

“In the end, the governor didn’t work all that hard for [the amendment],” says Keene. “For so many of our friendlies to run campaigns centered on reproductive rights, and then turn their backs on people who really helped them—we were dumbfounded.” The sting was made worse by the fact that the Family Foundation has pushed some of Virginia’s most notorious anti-abortion bills, the ones that had soured female voters on the Republican agenda in the first place.

The bills to regulate genetic counselors enjoyed strong support from the National Society of Genetic Counselors. The group’s model legislation for licensing counselors does not include a conscience clause. But according to Keene, the Virginia lobbyist for the national association rebuffed ACLU and NARAL efforts to dull the conscience clause several times in February and March.

The lobbyist, Aimee Seibert, referred questions about the conscience clause to the national association; a spokeswoman for the National Society of Genetic Counselors, in turn, referred questions to the Virginia legislators who finalized the language. The Family Foundation did not respond to requests for comment.

Opponents of Virginia’s conscience provision warn that the final law sets a dangerous precedent. “There’s a national movement to license this new health-related profession,” says Gastañaga. “If this law is used as a model for other states, or as a model for other professions in Virginia, it would be really, seriously bad.”

The Family Foundation, meanwhile, is hailing the new law as “a great benchmark for conscience rights in Virginia” and promises that this is only the beginning. Just before McAuliffe signed the law for the second time, the Family Foundation wrote in an email blast to its supporters, “If genetic counselors can be protected from being forced to violate their conscience, it follows that all other professions should receive equal protection.”