Last month, Shanesha Taylor, a homeless single mom in Phoenix, Arizona, was arrested for allegedly leaving her two children in her car while she went to a job interview. Taylor’s story, and her tearful mug shot, have attracted national attention and an outpouring of donations. Debate the morals, but one thing is clear: child care is expensive. As the Washington Post reported Wednesday, infant daycare costs more than in-state college tuition in about two-thirds of the nation.

In 31 states, parents have to shell out more annually for infant child care than for a year of tuition and fees at a mid-priced state college, according to a report released last fall by Child Care Aware America, a national organization of child-care resource agencies. In New York, daycare for young children costs $8,000 more than in-state college tuition. Infant child care in Massachusetts, Maryland, Colorado, Wyoming, Alaska and Oregon also costs thousands of dollars more per year than a state college education. Check it out, via the Post. (In red states, daycare costs more): 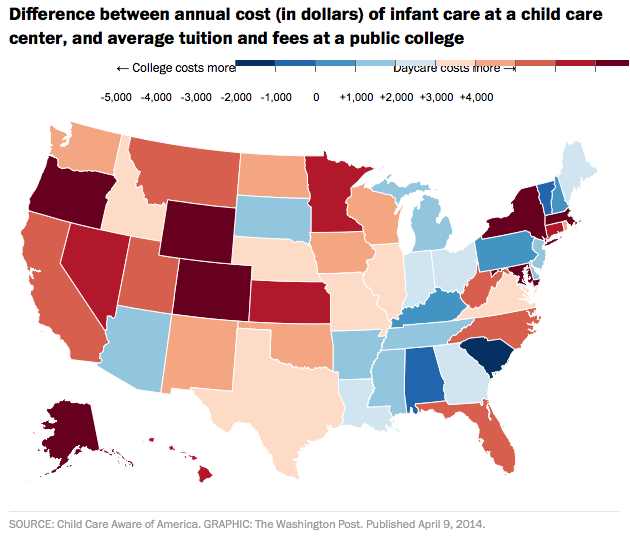 The difference in the cost of daycare and higher education among states is due to variances in costs of living, differing state regulations, and disparities in state spending on higher education.

Child care costs have jumped over the past couple decades. In 1985, the average weekly cost of daycare in the US was $87 in 2013 dollars. In 2010, child care cost $148 a week. That may help explain why more moms are choosing to stay at home today than at any point during the past 20 years. According to a Pew Research report released Tuesday, the share of stay-at-home mothers rose from a low of 23 percent in 1999 to 29 percent in 2012.