Donald Sterling’s penalty is in: a lifetime ban from the NBA and a $2.5 million fine, the maximum league sanction, for the racist audio recording released last week. The NBA will also work to force him to sell the Los Angeles Clippers, the team he’s owned since 1981.

It’s a harsh punishment, no doubt. But let’s not kid ourselves about the $2.5 million. Sterling, after all, is reportedly worth $1.9 billion. According to a 2013 Credit Suisse report on global wealth, the median American is worth $44,911. In other words, a $2.5 million fine for Sterling is like a $59 fine for that middle-of-the-road American. 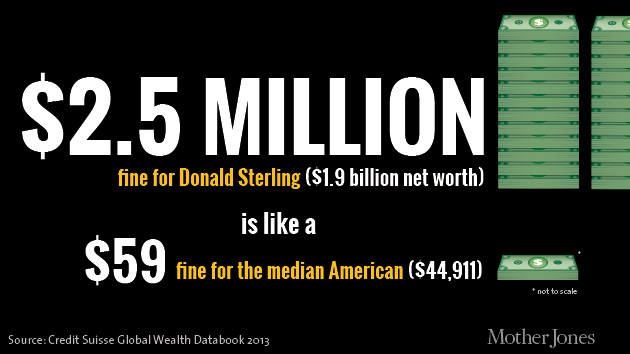 Also, a reminder: Donald Sterling bought the Clippers for $12.5 million. The team’s value is now at least $575 million; some think it’s worth more than $1 billion. We have a feeling he’ll come out of this just fine.