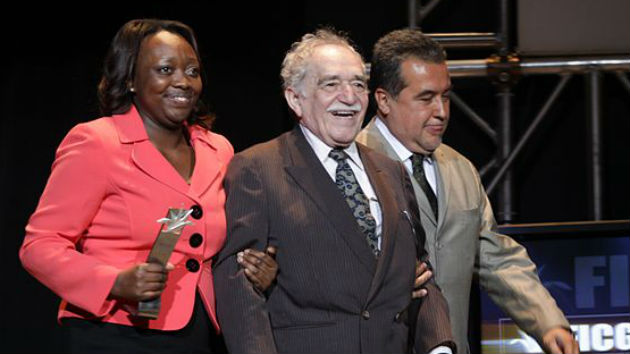 Gabriel García Márquez passed away on Thursday at his home in Mexico City. He was 87. The Nobel Prize-winning Colombian novelist was celebrated for such works as One Hundred Years of Solitude and Love in the Time of Cholera. “The world has lost one of its greatest visionary writers—one of my favorites from the time I was young,” President Obama said on Thursday.

When a literary figure as towering as García Márquez dies, there are too many fascinating things to write about—his writing, his political history, his wild ride of a life. (Hell, I could see myself writing an entire term paper on his friendly relationship with Colombian pop star Shakira!) I’m not going to attempt anything close to a definitive obituary of a man who gave the world so much through his art. I’ll leave that to others.

But I’d like to highlight one politically significant part of Gabo‘s life: García Márquez wasn’t just an acclaimed writer and passionate supporter of left-wing causes—for a time, he was an intermediary between Colombian leftist guerrillas and the government.

Here’s an excerpt from a 1999 New Yorker profile written by Jon Lee Anderson:

García Márquez who has often referred to himself as “the last optimist in Colombia,” has been closely involved in the peace negotiations. He introduced [Colombian president Andrés] Pastrana to his old friend Fidel Castro, who could facilitate talks with the guerrillas, and he helped restore good relations between Washington and Bogotá. “I won’t say that it was Gabo who brought all this about,” Bill Richardson, the U.S. Secretary of Energy, said early this summer, “but he was a catalyst.” García Márquez was invited by the Clintons to the White House several times, and friends say he believed that he was going to not only carry off the immediate goal of getting some sort of negotiated settlement between the guerrillas and the government but also finally help bring about an improvement in relations between the United States and Cuba. “The U.S. needs Cuba’s involvement in the Colombian peace talks, because the Cuban government has the best contacts with the guerrillas,” he explained to me. “And Cuba is perfectly situated, only two hours away, so Pastrana can go there overnight and have meetings and come back without anyone knowing anything about it. And the U.S. wants this to happen.” Then he smiled in a way that indicated he knew much more than he was telling me, as usual.

The whole profile, which you can check out here, is definitely worth a read.

I now leave you with this footage of García Márquez visiting Shakira and dancing: