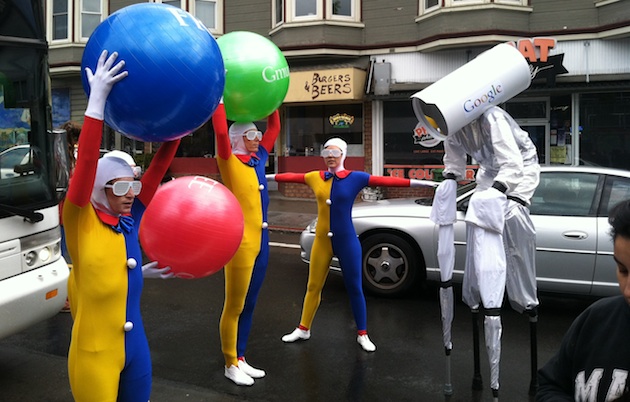 This morning, a few dozen housing and inequality activists from Heart of the City surrounded a Google shuttle at 24th and Valencia Street in the Mission District of San Francisco. The purpose: to draw attention to a proposed tax hike on San Francisco’s Municipal Railway (Muni) public transportation system and to get the Bay Area’s technology companies to pay more for using public bus stops to pick up shuttle riders. It was the latest in a series of attempts to raise awareness about the tech industry and its effect on the city. What followed was a unique bit of performance theatre that might just be the most San Francisco protest ever.

As an April Fool’s day parody, protesters announced that Google would unveil a “Gmuni” program. They handed out fake bus passes to bystanders, set up a microphone for a Gmuni spokesperson, and surrounded the Google bus with a dancing team of colorful acrobats—one dressed as a Google surveillance camera on stilts, while six others in futuristic clown costumes toted yoga balls emblazoned with a logo fashioned from the search engine’s omnipresent typography. 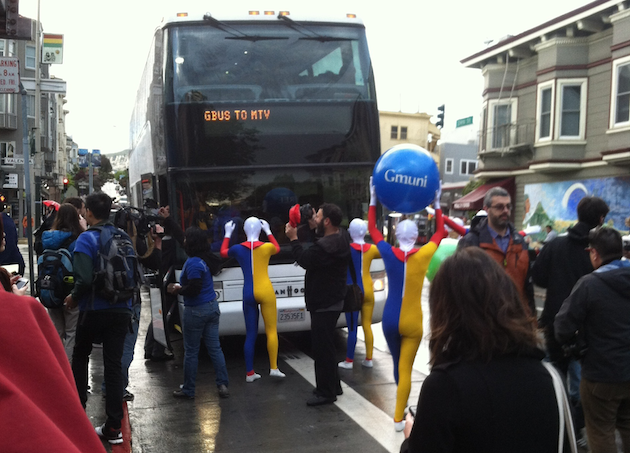 Clad in a pinstripe suit and fake Google Glass, Judith Hart, the acting President of Gmuni, took over the loudspeaker.

After a round of cheering, she added:

“Everyone in the entire Mission—in the quad, really—should be able to get on the bus with one of these passes. As you can see,” she announced, pointing to a stranded bus, “the Muni is not adequate enough to stop at their own stop—the Google bus got here first, so we’re just trying to let people on.” 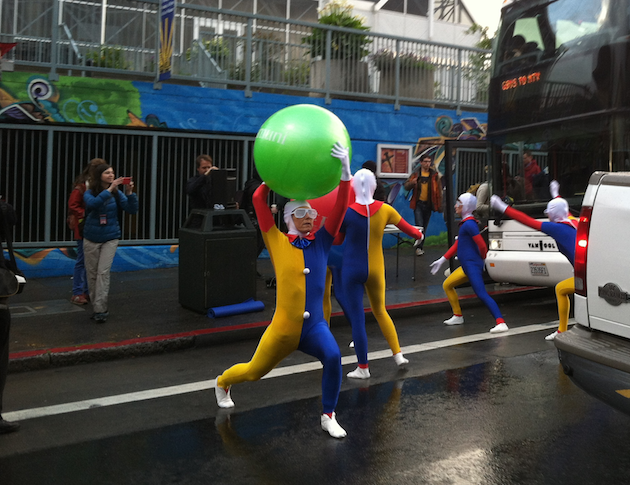 The crowd then jokingly asked questions about the program, “Excuse me, will there be regular coffee or gourmet coffee?” “Gourmet coffee, absolutely–it’s all Blue Bottle.” “Will there be yoga?” “Will there be yoga on the bus? Currently, there is no plan for on-bus yoga practice; however, we have been looking into a development study about what we can do with the luggage compartment.”

Throughout Hart’s speech, several people tried to board the real Google bus with their fake passes, but were quickly stopped by the driver and police. After about a 20 minute delay, the police pushed back protestors far enough to allow the bus to roll along its way.

Following the speech, organizer Amanda Ream dropped the tongue-in-cheek circus act to explain the move. This afternoon, the Board of Supervisors are considering a series of transportation changes, including a Muni fare hike and a proposal to generate $1.5 million by charging tech companies $1 a day per stop. Ream and the other activists would like tech companies to pay more. “While we appreciate [the proposal] and that Google funded the free Muni for Youth program, we want to see that the tech industry in San Francisco pays their fair share and actually pays taxes so the people of San Francisco can fund Muni.”

Deepa Varma, a housing rights attorney and spokesperson for the protest, elaborated. “Today, there are hearings about Muni increasing their fares and that’s happening at a time when wages aren’t going up for most people in the city, but they’re going up for the people riding the free buses. To pay even more for transportation to just get to and from work is not viable and it’s not fair.” As a result, she says, many people are being displaced.

She went on to explain that the Google bus is largely a symbolic stand-in for issues of gentrification and fare hikes, and that the protests aren’t directed at employees of Google or any other tech giant. “It’s absolutely not a housing activist against tech worker dynamic. It looks like that right now, but it’s more about trying to draw attention to the fact there is this disparity in terms of how people are treated and in terms of what people have access to at city hall.”

Ream agrees, “We want to stop the gentrification, and the displacement, and the Ellis Act. We believe that all these issues are tied together. The tech industry has an opportunity to show real leadership and be a good neighbor and make it possible by paying taxes for Muni to actually be affordable and accessible to people all year round—not just with their gift to the city.”

According to polling by EMC Research on behalf of the Bay Area Council, San Franciscans are generally positive about tech buses, although 48% of those surveyed do believe employee shuttle buses are contributing to gentrification and 38% think they’re causing the growing gap between rich and poor.

For more on the protest, our friends at Mission Local have a great video of the demonstration here.