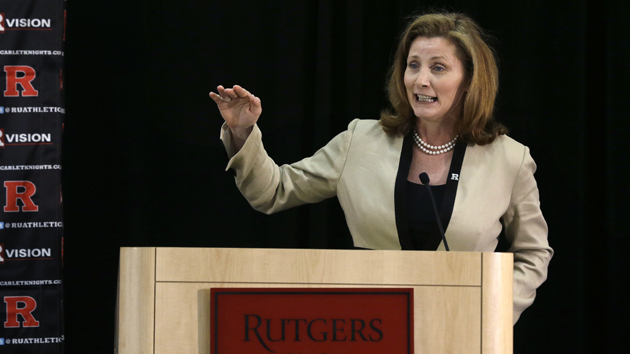 Rutgers University athletic director Julie Hermann told a journalism class that athletes at the school receive plenty of benefits and that it would be “great” if the Star-Ledger, the New Jersey newspaper that just laid off 167 staffers, would die completely, according to a report by Muckgers last week.

When a student in the class said the Star-Ledger might go under, Hermann responded, “That’d be great. I’m going to do all I can to not to give them a headline to keep them alive because I think I got them through the summer.” The paper dedicated a great deal of coverage to Hermann after she replaced former AD Tim Pernetti, who resigned last year when it was revealed he allowed men’s basketball coach Mike Rice to keep his job after being presented video evidence of Rice pelting his players with basketballs and shouting insults and gay slurs at them during practice. Hermann came with her own baggage—the women’s volleyball team she coached at the University of Tennessee 17 years ago wrote a letter to the athletic department accusing her of “mental cruelty,” including referring to athletes as “whores, alcoholics, and learning disabled.”

Hermann has denied treating her players that way, and in a statement from Rutgers to the Star-Ledger, said she was just speaking to the class “in an informal way and out of the glare of the media spotlight” and “had no knowledge of the impending reorganization of the Star-Ledger.” (Hermann’s talk, which came before the most recent layoffs were announced, was recorded by a student in attendance.)

The classroom conversation also touched on the college athlete unionization movement. “What of those 1,000 institutions that sponsor college sports—who can sustain the kids unionizing?” Hermann asked the class. “Who can do that? Most of them are barely making it as it is.” Hermann, it should be noted, has a base salary of $450,000. She went on to extol the benefits Rutgers athletes are already getting (especially now that that no one is throwing basketballs at them during practice, one assumes):

By the time we go recruit [a football player], sign him, bring him to campus, do all of their care, provide all of their medicine, all of their travel, all of their gear, all the things we’ve got to provide—by the time we’re done with him, here at Rutgers, we’ve spent over half a million dollars on him minimum…so, technically, what we’re providing for them is a value, it’s about $100,000. How many of you are going to walk out of here and get jobs that pay you $100,000?

What’s amazing is that Hermann’s description of what Rutgers provides athletes is the exact legal argument that allowed Northwestern University football players the right to unionize. (Not to mention that one of players’ largest grievances is that universities don’t “do all of their care,” since many health effects from playing football don’t crop up until later in life.) And while many recent Rutgers grads may not be pulling in $100,000 salaries, their employers will be paying them in real money—not scholarships, shoulder pads, and concussion treatments.