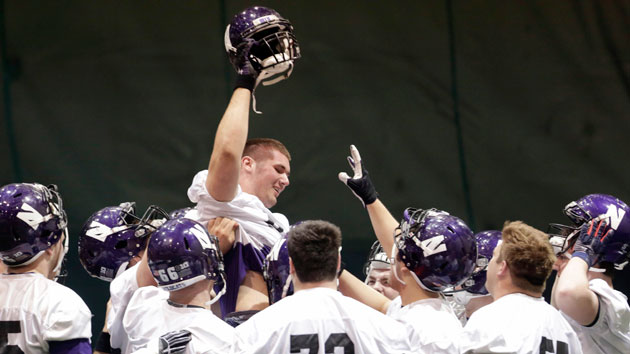 Northwestern University football players voted on unionization today following a push from current and former athletes, a regional labor board hearing in their favor, and a concerted effort by university officials to convince players to vote no. Now that ballots have been cast, the landscape of college sports has been…well, it’s pretty much the same. For now, at least.

While the votes have been cast, they will not be counted until the National Labor Relations Board headquarters in Washington, DC, rules on whether the athletes are employees, which could take months. The board’s Chicago region found that they were, but Northwestern appealed that decision. The university has been active in pushing players not to unionize: Football players received iPads and were thrown a party at a bowling alley the first day of practice, though Northwestern officials said it was unrelated to the upcoming union vote. Head coach Pat Fitzgerald emailed the team that they might not be able to trust a union, and that the downside of organizing is much bigger than the upside. “You have nothing to gain by forming a union,” he wrote, keeping with the school’s theme that players have plenty to lose but their chains.

“Today’s vote clearly demonstrates that amateurism is a myth and that college athletes are employees,” said Ramogi Huma, president of the College Athletes Players Association.

Just by securing the right for players to vote on representation, though, union advocates say they’ve already won. “Today is special because college athletes exercised their rights under labor laws, rights the NCAA has fought hard to deny them,” said Ramogi Huma, president of the College Athletes Players Association, which will represent the players if they vote to unionize. “Today’s vote clearly demonstrates that amateurism is a myth and that college athletes are employees.”

The results of the vote will only matter if the NLRB upholds the decision that the football players are Northwestern employees. If players voted no, the status quo will remain and players will be free to vote again next year (and every year after that). If they voted yes, Northwestern will likely refuse to bargain, which would take the case to federal court, dragging the process out even longer.

It may be a slow march, but the fight for unionization—led by Huma and former Northwestern quarterback Kain Colter—is already paying dividends. Last week the NCAA removed restrictions on food for athletes, and president Mark Emmert told ESPN that the NCAA will likely vote on covering the difference between a scholarship and a full cost of college attendance, as well as adding an extra year of eligibility for players who are forced to sit out a year after transferring to another school. While those solutions aren’t exactly what the union has called for, they are the first of what will likely be many compromises as players and advocates keep the pressure on.