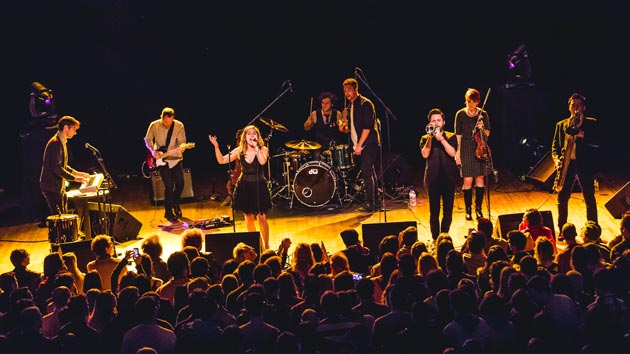 San Fermin didn’t start out as a band. In the summer of 2011, Ellis Ludwig-Leone took his newly earned degree in classical composition to a secluded artists retreat in Canada and returned with a 17-song score for 22 instruments, which he titled San Fermin. Even after recording it, with 22 musicians, “It didn’t feel like a band yet,” he recalls. “It felt like an album I had made.”

But Ludwig-Leone (a fitting surname) wanted to perform his composition, so he set about recruiting a smaller, core group to do it live. “The idea was to find players who could read music well, and who could also exist in a rock band setting,” he says. As a result, San Fermin the concept album evolved into San Fermin the band, whose powerful sound matches the album’s elaborate layers while upping the rock. The eight-member ensemble, which includes a trumpet, baritone sax, and violin, creates swelling climaxes and tight harmonies reminiscent of The Dirty Projectors, landing in a genre Ellis defines as “sort of orchestral indie rock.” I caught up with Ludwig-Leone, who handles the band’s keyboard duties, along with Stephen Chen (sax) and Mike Hanf (drums), in advance of a sold-out San Francisco show.

The dynamic between concept album and rock band is just one of San Fermin’s underlying contrasts. Ludwig-Leone loves “when a song has something in it, and also has the exact opposite in it, and they somehow coexist.” Consider “Sonsick,” written just months after his college graduation. It’s about young adulthood and the realization that “your decisions have long-range consequences at that time in your life.” The song “feels like a party, but it also feels like a panic attack. And those two things together have this weird friction.”

The album hinges on a back-and-forth dialog between characters with opposite ideologies. There are emotional, grandiose lyrics sung in Allen Tate’s deep bass, countered by the down-to-earth responses of Rae Cassidy. (On the recorded version, Jess Wolfe and Holly Laessig of Lucius share lead female vocals.) Ludwig-Leone establishes tension by “having the male and female voices sing very different things,” a device he expects to continue in the future.

San Fermin is noteworthy for its precise musicality. “A lot of people studied theory and composition in this band,” drummer Hanf explains. “We read into it a bit to make it sound good.” Several members boast a mixture of classical training and rock band experience.

“They are bringing the creativity of people who actually write music to their parts,” Ludwig-Leone says. “Probably 50 percent of Steve’s notes at this point are embellishments of what I once wrote.” Chen, the saxophonist, doesn’t deny it, and adds that his bandleader “just discovered a new line that I’ve been playing.”

“It’s well-balanced,” Hanf chimes in. “It all goes back to Ellis to make sure everything’s cool, but the people who want freedom to try new ideas, have it. I improvise a lot, pretty much every show. And if it sounds good, it sounds good. If it doesn’t, it gets nixed. It’s kind of nice to have one person be like, yes or no.” He says the band’s willingness to experiment gives the live shows a “state of tension” that’s exciting for the performers as well as the crowd.

Ellis agrees. “On the record, it’s one thing, because that’s a document. I want to control a lot more on that. But once you start playing live, if you’re not using the talents you have, you’re just being a stupid bandleader. And it gets boring.”

As San Fermin develops further, fans seem to like what they’re hearing. “I’m doing taxes—oh my god, such a terrifying thing anyway,” Ellis says. “I’m going through the receipts, and even from September it’s crazy to see the number of people who were in the room. We’ve seen a lot of very explosive growth. The first time we played in Portland, there were 90 people. When we were back, there were 400, and there was a line out the door—it was oversold.”

“We always ask people at the merch table, ‘How did you find out about our band?’ It’s useful for us,” Chen says. They credit Sirius XMU and NPR, including a Tiny Desk Concert in October, with bringing in early fans.

Hanf notes that they also benefited from the endorsement of “Paul Krugman, of all people! That was the funniest one, I think. He was backstage [before their Bowery show] with Peter Sagal, just drinking beer on the couch.”

“Such a surreal backstage!” Ludwig-Leone exclaims. “I had to get out of there, it was too much. It was like every person my dad listens to on the radio!”

The attention is paying off: San Fermin heads for Europe in April, returning to the United States in time for performances at Firefly, Summerfest, and Lollapalooza. Chen says the small stages they started out on “definitely constrained our ability to jump around and interact with each other physically. At festivals, we get a nice big stage. People are hearing the music in a cool new way, and also getting to experience our band visually.”

Watching San Fermin live in San Francisco, it’s obvious they’re having fun—coming to the front for solos, dancing around, and playing off one another and the audience.

None of this was what Ludwig-Leone pictured when the band first came together. “I thought the prime place for us to play would be performing arts centers, because the album itself is really lush, and there are some songs that rock hard, but it’s really this sort of introspective thing. And now I actually feel the opposite: When we play at seated venues, we’re a little freaked out, because we’re so used to revving up a crowd at a rock club…So there’s this weird give and take, where you have to be able to do the chamber music sound, and also the rock band sound.”

Somehow, San Fermin makes it all work. “It feels greater than the sum of its parts to me,” the bandleader says. “There’s all sorts of stuff in there that wasn’t there when I wrote it, and is very specific to our live show. I think ‘The Count’ is our favorite thing to play live. That’s the song where we take it the furthest out—like totally off of the page.”

Hanf explains: “It goes straight from composed music to like eight bars of entropy, [then] right back into where we were before.”

Now, as Ludwig-Leone composes San Fermin’s followup album, “I think of everyone as I write for their parts.” Inspired by what the group has done with songs like “The Count,” he says the upcoming album “feels like it’s often very controlled. Small, small, small…big crazy…small, small, small. That’s the energy you get from having a band doing their own thing. That’s one of the many ways that touring has shaped the writing process.”

While writing San Fermin, he “didn’t have the luxury of hearing songs until we recorded them, so I would bring people in one by one. But now I write the song, give people the music, we try it live, and then we can make adjustments. It’s much more personalized to the players.”

The band members are busy with other projects, too. Ludwig-Leone recently composed a score for a ballet. Chen doubles as sax for Great Caesar Band. Hanf, who has put out solo records and serves as an “on-call, hired gun” drummer, says San Fermin marks “the first time I’ve actually drank the Kool-Aid” and spent months on the road with a single band.

The side projects are helpful for San Fermin. “I think that’s one of the things that really makes this band work,” Ludwig-Leone explains. “There’s so much creative energy in the band, but at the same time, the writing—it comes from me. I think we avoid some of the pitfalls of having a bunch of different cooks in the kitchen, because these guys all have their own creative outlets.”

Unsurprisingly, the members of San Fermin draw their musical influences from a variety of sources. “I would say that literally every kind of music has been played in the tour van,” says Ludwig-Leone.

“We’ve gone everywhere from Whiskeytown B-sides to obscure classical music to Taylor Swift,” Hanf adds. “And we love music. We’re dorky about it; we really get excited when we listen to good records or when somebody throws on something new.” Ellis draws inspiration from the “big, concept-y records” of Sufjan Stevens; the first time he heard Illinoise was “a very formative moment.”

“But being in the van is amazing, because I swear to God it’s everything. Even things you wouldn’t think would get in the van. Like, the most intense screamo music, it’s there. At least 50 percent of the music Rae listens to was recorded before 1930. It’s really all over the place.”