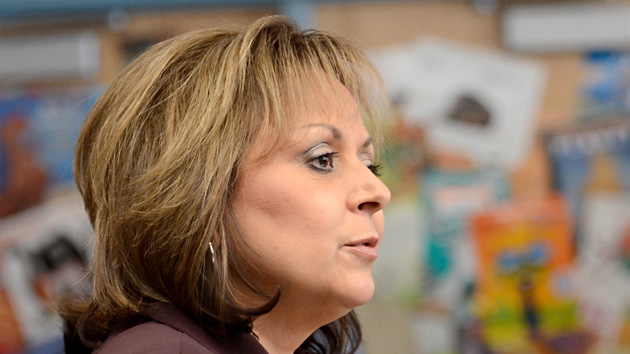 On Wednesday morning, Mother Jones published a cover story about New Mexico Gov. Susana Martinez, a rising star in the Republican Party, that draws on previously unreleased audio recordings, emails, and text messages. In these audio tapes, she and her aides use crude and often offensive language when referring to political opponents. Martinez’s reelection campaign immediately responded.

In an email blast to supporters, Martinez attacked the messenger, calling Mother Jones a “tabloid” and “one of the most radically liberal publications in the country.” Martinez accused Mother Jones of “peddling false, personal attacks against me, using stolen audiotapes from our debate prep sessions four years ago.” She claimed that “this shows just how far the Left is willing to go to stop reforms in New Mexico.” In the email, Martinez does admit to calling 2010 Democratic opponent Diane Denish “the B-word,” adding, “I admit it—I’ve had to fund the cuss jar a few times in my life.” Her email ends with a plea for a campaign contribution.

Her email neglects to address several parts of the story, such as the reports that Martinez’s top adviser, Jay McCleskey, wrote “I HATE THAT FUCKING BITCH!” about a fellow GOP pol, and that a former Martinez adviser mocked New Mexico political icon Ben Luján for his English-speaking abilities, saying he “sounds like a retard.”

Martinez’s campaign has also created a petition describing Mother Jones as “the far-left’s premier magazine” and calls the story “one of the most desperate and despicable attacks to date.” The Martinez campaign’s message goes on to ask supporters to sign a petition ostensibly to “show the D.C. liberal media that their desperate attacks have no place in our state.”

Martinez’s campaign has made full use of social media in its pushback, buying a promoted tweet on Twitter urging people to “stand with me”:

Similarly, she asked her Facebook friends to “stand with me against the D.C. liberal media and show them that their Washington-style attacks have no place in our state.”

Martinez did retweet a link to Mother Jones‘ story that was tweeted by Buzzfeed writer McKay Coppins—only to delete her tweet 14 seconds later.