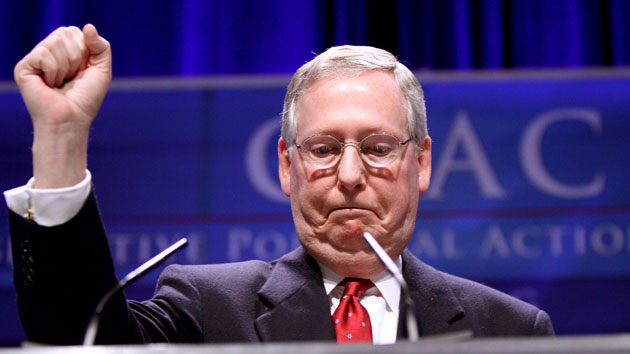 By mounting a crusade to repeal Obamacare, Senate minority leader Mitch McConnell has betrayed the residents of Kentucky—so says the former Republican senator from the Bluegrass State who gave McConnell his first job in politics.

In 1968, the year after McConnell graduated from the University of Kentucky College of Law, Marlow Cook, a moderate Republican running for an open US Senate seat in Kentucky, hired McConnell as his campaign’s state youth chairman. McConnell, who had previously served two internships in Washington for Kentucky politicians, “fit in very well” with the campaign, Cook recalls, because he had been state president of the Young Ripon Society, an organization of moderate GOPers.  And after Cook won the Senate seat, he offered McConnell a job as a legislative aide. McConnell moved to Washington with Cook, and as a top staffer in Cook’s office he helped the senator with one of Cook’s chief priorities: passing the Equal Rights Amendment. Cook was the lead Republican in the upper chamber pushing the ERA, a proposed constitutional amendment guaranteeing equal rights for women. McConnell, Cook recounts, “worked and worked hard” to gain support for the measure and counter opposition—both inside and outside the Senate. “Phyllis Schlafly was one of the people we had to contend with, and he did,” Cook notes, referring to the prominent conservative who led the anti-ERA effort.  (In those days, McConnell also was skeptical about the Vietnam War and inspired by Martin Luther King Jr. and the civil rights movement.)

The ERA passed the Senate and House in 1972, but by then McConnell had left Cook’s office and headed back to Kentucky. The amendment was subsequently not ratified by enough state legislatures to be added to the Constitution.

Having decades ago embraced the young McConnell partly because he was a fellow moderate Republican, Cook is mystified by his former staffer’s journey to the right. “I am absolutely amazed he became a conservative,” Cook, now 87 years old, says. And he is aghast that McConnell is a fierce advocate of killing President Barack Obama’s Affordable Care Act. “If he had any knowledge of the lack of health and medical facilities in the hills of Kentucky,” Cook says, “he’d know it’s a problem we need to solve. For Mitch McConnell to decide the new health program is not good for Kentucky—it tells me he’s not looking out for his own constituency.” Cook notes that the Gov. Steve Beshear, a Democrat, has been “tremendously successful” in signing up thousands of Kentucky citizens for health insurance under Obamacare.

“I don’t know what Mitch is doing,” Cook says. “If he thinks this whole thing should be killed, it’s an awful crap shoot. Instead of stopping [Obamacare], they should be correcting the things in the bill that need correcting. But to say it should be killed? I know what the real, real conservative Republicans want. They would love to get rid of Medicare. They would love to get rid of Social Security.”

In 2004, two weeks before the election, Cook wrote an op-ed for the Louisville Courier-Journal endorsing Democrat John Kerry, noting he was disgusted by the “Iraq fiasco” and “our staggering debt.” He insisted he remained a Republican.

“I don’t mind someone being a conservative,” Cook remarks. “But to stand up and say, ‘I’m the most conservative leader of the Senate ever‘? Mitch did that, and I thought, ‘My god.’….I don’t have the vaguest idea how he has come to the point he has come.” But Cook does add, “If there is one thing Mitch is, he’s a remarkable politician.”