It’s a question at the heart of the gun debate. Most Americans think the answer is yes (an overwhelming majority continues to support comprehensive background checks for gun buyers), while the National Rifle Association emphatically believes the opposite (its leadership opposes new firearm regulations of virtually any kind). Now, a new report from the advocacy group Everytown for Gun Safety crunches  some actual data: Citing figures from the FBI, the gun-reform group reports that the number of mental health records collected from states in the National Instant Criminal Background Check System (known as “NICS”) has tripled to nearly three and a half million since 2011—and that as a result, a growing number of mentally ill people have been stopped from purchasing firearms through licensed dealers.

The change owes to increased federal funding for the system and a wave of more stringent state laws put in place. As we documented at the one-year anniversary of the Sandy Hook massacre, 2013 saw a barrage of new state laws from coast to coast, both easing and tightening gun restrictions. Among them were laws in 15 states intended to keep firearms away from the seriously mentally ill. 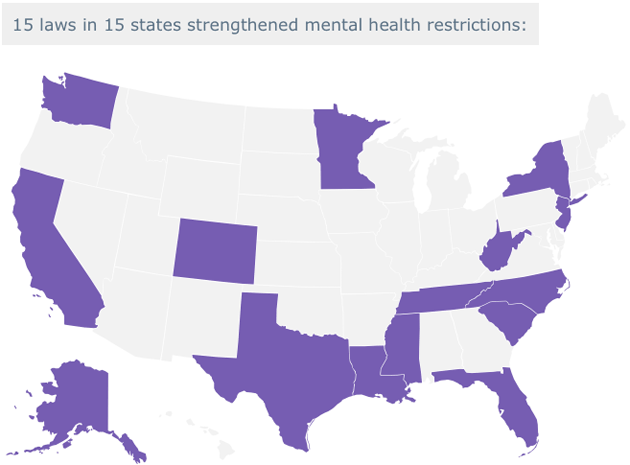 After a ghastly run of mass shootings from Tucson to Aurora to Newtown to Fort Hood (again), this particular issue no longer seems such a partisan one. The states passing bills in 2013 included gun-rights strongholds such as Texas and Florida, and this spring Republican-led Arizona and Oklahoma joined the list. At least 18 states have moved on this issue since late 2011, according to Everytown.

Granted, that’s but a tiny fraction of the 300 million guns in circulation nationwide. And it remains remarkably easy for people to get firearms from somewhere other than a federally licensed dealer. But it only takes one gun in the wrong hands to wreak havoc. As our in-depth investigation showed, a majority of mass shootings are carried out by people with serious mental health problems, using weapons they obtained legally.

Also notable in Everytown’s report are the states still failing on the mental health front with respect to firearms. This interactive map shows them, including a couple that may seem surprising—liberal Massachusetts?—and others that have fresh reason to consider the issue, such as Georgia. It was less than a month ago that a young man went on a rampage at a FedEx facility in suburban Atlanta, wounding six people before killing himself. Police investigators declined to say where he bought the gun he used, but his state of mind was clear enough: He described his “mental instability” in a suicide note that he left behind. “I am a sociopath,” he wrote. “I want to hurt people.”