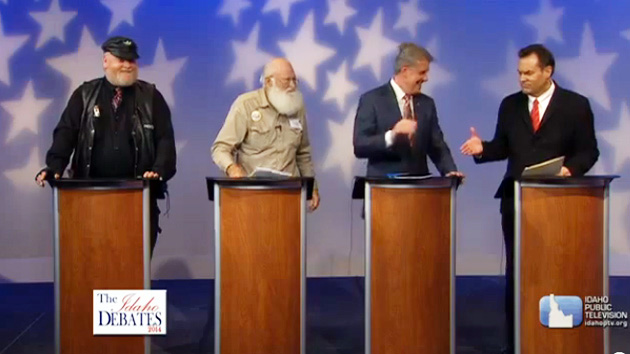 What is even going on here? <a href="https://www.youtube.com/watch?v=CQlPcwiruaY">Idaho Public Television</a>/YouTube

Idaho Republican Gov. Butch Otter (no relation) is facing a primary challenge this year from Russ Fulcher, a conservative state senator. Idaho is a really conservative place and Otter has angered his party’s base by supporting the Common Core math and English standards, so the incumbent isn’t taking any chances. When it came time for Otter and Fulcher to debate, the governor insisted on opening up the floor. He argued that all candidates should be allowed on stage, which sounds nice and democratic in theory, but in practice meant that Fulcher had to split time with two people who will never be governor—also-rans Harley Brown and Walt Bayes.

Even before Wednesday’s debate started, Idaho Public Television announced that it would broadcast the event on a 30-second delay in anticipation of rampant cussin’. Brown—who wore his customary leather vest and leather hat, has the presidential seal tattooed on his shoulder, two cigars in his right breast pocket, and is missing several prominent teeth—used his closing argument to wave a signed certificate from a “Masai prophet” that confirmed that he would one day be president of the United States. Brown revealed that he supports gay marriage because as a cab driver in Boise he discovered that gay people “love each other more than I love my motorcycle.” His closing argument was blunt: “You have your choice, folks: A cowboy, a curmudgeon, a biker, or a normal guy. Take your pick… We’re leaving it up to you.”

Bayes, who has a beard that extends halfway down his ribcage and resembles a 19th-century gold prospector, also wanted to talk about Biblical prophecy, but mostly just abortion. His credentials for governor are that he once went to jail for homeschooling his 16 children, five of whom went on to become rodeo cowboys. “Everybody, thanks everybody, okay?,” he said during his closing statements.

Most of all, he wanted to thank Gov. Otter: “Butch, I want to thank you for making it possible for me to be here tonight. He kind of insisted that me and this other un-normal person could be here tonight.”

This exactly the kind of circus the United States tried to break away from:

Correction: This post misstated the components of the Common Core State Standards.