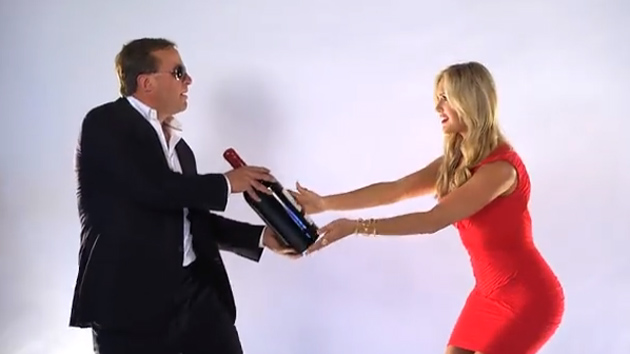 Meet John Jordan. As National Journal‘s Shane Goldmacher writes, Jordan runs his own vineyard, flies his own planes, cuts his own pop-song music video parodies (here he is with some barely clothed women in “Blurred Vines”)—oh, and he’s a huge donor to Republican candidates and committees. He raised and donated seven figures for Karl Rove’s Crossroads organization in the 2012 cycle. Last year, he went solo, pumping $1.4 million into his own super-PAC, the deceptively named Americans for Progressive Action, in an effort to elect Republican Gabriel Gomez in a Massachusetts special US Senate election. (Gomez lost by 10 points.)

Goldmacher visited Jordan at this 1,450-acre vineyard in northern California and came back with no shortage of juicy quotes and flamboyant details. For all his political giving, it turns out, Jordan doesn’t really like politicians:

“I’m not trying to spoon with them,” he says. “I don’t care. In fact, I try to avoid—I go out of my way to avoid meeting candidates and politicians.” Why? “All too often, these people are so disappointing that it’s depressing. Most of these people you meet, they’re unemployable… It’s just easier not to know.”

Jordan dishes on Rove and his Crossroads operation, which spent $325 million during the 2012 election season with little success:

“With Crossroads all you got was, Karl Rove would come and do his little rain dance,” Jordan says. He didn’t complain aloud so much as stew. “You write them the check and they have their investors’ conference calls, which are”—Jordan pauses here for a full five seconds, before deciding what to say next—”something else. You learn nothing. They explain nothing. They don’t disclose anything even to their big donors.” (Crossroads communications director Paul Lindsay responded via email, “We appreciated Mr. Jordan’s support in 2012 and his frequent input since then.” Rove declined to comment.)

Jordan’s thoughts on his super-PAC’s $1.4 million flop in 2013 offer a telling glimpse into the world of mega-donors, the type of people who can drop six or seven figures almost on a whim:

Jordan had blown through more than $1.4 million in two weeks on a losing effort—and he loved every second of it. “I never had any illusions about the probability of success. At the same time, somebody has to try, and you never know. You lose 100 percent of the shots you don’t take, so why not do it?” he says. “And I’ve always thought it would be fun to do, and I had a great time doing it, frankly.” Now, Jordan says that the Gomez race was just the beginning—a $1.4 million “potential iceberg tip” of future political efforts.

Who might Jordan support in 2016? He tells Goldmacher he hasn’t decided. But he was impressed during a recent visit by the subject of Mother Jones‘ newest cover story, New Mexico Gov. Susana Martinez.