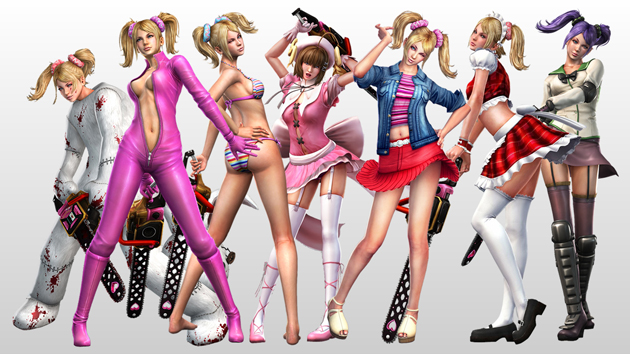 The various faces of Juliet Starling, the protagonist of Lollipop Chainsaw.<a href="http://theclassicgamer.com/lollipop-chainsaw-review/">TheClassicGamer.com</a>

Hollywood movies, television, and video games are meant to entertain and transport us outside of our narrow realities, but what if our favorite escapes are perpetuating damaging stereotypes? In her video series, Feminist Frequency—which has garnered her some extreme hateful backlash—pop-culture critic Anita Sarkeesian tackles unflattering portrayals of women in media. You may recognize some of the following tropes. Quotes are from Sarkeesian.

1. The Damsel in Distress

A female character who is “placed in a perilous situation from which she cannot escape on her own and must then be rescued by a male character.” Examples: Zelda in The Legend of Zelda, Princess Peach in Super Mario Bros: The Great Mission to Save Princess Peach, Krystal in Star Fox Adventures for Gamecube.

“The female version of an already established or default male character,” usually identified by long eyelashes, lipstick, hair ribbons, heels, or the color pink. Examples: Ms. Pac-Man, Amy Rose from Sonic the Hedgehog, Minnie Mouse, Peb and Pab from Bubble Bobble, and the pink boulder from Giant Boulder of Death.

A female character’s rape, murder, or victimization is the impetus “to move the male character’s story arc forward.” Examples: The Green Lantern, whose protagonist finds his girlfriend’s body in a fridge; the Max Payne games, wherein Max seeks revenge for his murdered wife and child; and Braveheart, whose Scottish protagonist (Mel Gibson) launches a revolution after the king executes his wife.

“A supernatural creature, usually a demon, robot, alien, or vampire, most often disguised as a sexy human female.” Examples: Isabel Lucas in Transformers 3, Laura Harris in The Faculty, Natasha Henstridge in Species, Poison Ivy in the Batman series, the fembots in Austin Powers: The Spy Who Shagged Me.

“A deliberately created, exaggerated characterization of a feminist that is used to undermine and ridicule the feminist movement.” Examples: The villains in the last season of Veronica Mars, Marcy Darcy in Married with Children, Phil and Lil’s mother in The Rugrats, Femme Fatale in The Powerpuff Girls.

A female character is impregnated by supernatural reproductive technology. Examples: Skully in The X-files, Starbuck in Battlestar Galactica, Deanna Troy from Star Trek, the Next Generation (who is impregnated by a ball of space energy).

“Female bodies exploited to infuse gritty or racy texture into game-worlds…These virtual women are often programmed as minimally interactive sex objects to be used and abused by the player.” Examples: Popular franchises like Hitman, Need for Speed, Assassin’s Creed, and Grand Theft Auto.

Wherein the successful game player is rewarded for accomplishments with “unlockable hyper-sexualized costumes for female characters” or racy “cinematics and/or hidden items or artwork.” Examples: Especially prevalent in combat-heavy series’ like Dead or Alive, Tekken, and Soul Calibur.

This “hyper-sexualized, hyper-violent female character presents the illusion of female empowerment but is designed as a sexual fantasy.” Examples: Tomb Raider‘s Lara Croft, Juliet Starling from Lollipop Chainsaw, and the title character in the game Bayonetta.