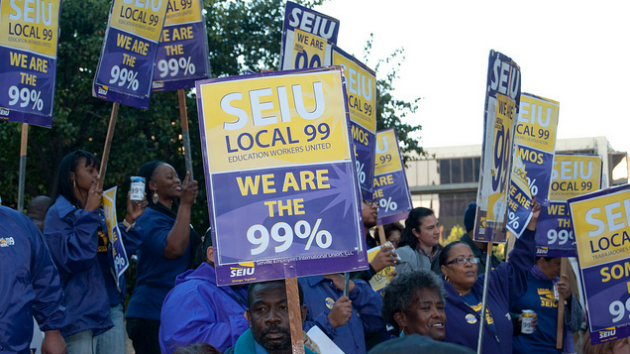 The US Supreme Court on Monday issued a stinging decision—but not a fatal one—to the nation’s public-employee labor unions, which represent more than 7 million workers around the country.

In the case Harris v. Quinn, the court’s five conservative justices ruled that home-care workers in Illinois—such as the lead plaintiff, Pam Harris—cannot be forced to pay dues to a union if they’re not union members because they are not full-fledged public employees like cops, firefighters, and teachers.

But there’s good news for organized labor: The court did not deliver the killer blow to public-employee unions as some warned it might. The court declined to overturn the 1977 decision in Abood v. Detroit Board of Education, the opinion that upheld the model of public-employee unionism. Had the court tossed out Abood, it would’ve essentially made right-to-work—one of the conservative movement’s favorite anti-union policies—the law of the land and dramatically damaged the ability of unions such as SEIU, AFSCME, and others that represent public workers to collect dues and engage in political and issue advocacy.

SEIU President Mary Kay Henry slammed the court’s decision in Harris. “No court case is going to stand in the way of home care workers coming together to have a strong voice for good jobs and quality home care,” she said in a statement. “At a time when wages remain stagnant and income inequality is out of control, joining together in a union is the only proven way home care workers have of improving their lives and the lives of the people they care for.”

Pam Harris, the lead plaintiff in the case, and Harris’ legal team, the National Right to Work Foundation, hailed the decision. “We applaud these home-care providers’ effort to convince the Supreme Court to strike down this constitutionally-dubious scheme, thus freeing thousands of home-care providers from unwanted union control,” Mark Mix, president of the National Right to Work Foundation, said in a statement.

However, Justice Samuel Alito, who wrote the majority’s opinion in Harris, left open the possibility for a future challenge to Abood. Alito noted that the “Abood court’s analysis is questionable on several grounds.”

In other words, the fight over public-employee unions is far from finished. “The court’s opinion in Harris is very much in the mold of opinions by the conservative Roberts Court majority: Issue a relatively narrow ruling on the conservative side, but lay the groundwork for a broader conservative ruling in the future,” says Rick Hasen, a law professor at the University of California–Irvine. “In Harris, the court sets itself down the path of overruling Abood but does not take that step yet.”

For more on Harris, read the below explainer.

Forget Wisconsin Gov. Scott Walker and his fellow union-bashing governors. Forget the partisan Republican attacks on organized labor. The gravest threat today to public-employee unions—which represent cops, firefighters, prison guards, teachers, nurses, and other city and state workers—is a Supreme Court case named Harris v. Quinn, which could be decided as early as this Tuesday. And, strangely enough, it is the court’s most sharp-tongued conservative, Justice Antonin Scalia, who could ride to organized labor’s rescue.

The case pits several of the nation’s mightiest labor unions, such as the Service Employees International Union (SEIU) and the American Federation of State, County, and Municipal Employees (AFSCME), against their longstanding foe, the National Right to Work Legal Defense Foundation, which helped bring the case. National Right to Work is funded by some of the biggest names in conservative philanthropy: the Bradley family, the Waltons of Walmart, Charles Koch, and DonorsTrust and Donors Capital Fund, two dark-money ATMs. Labor officials see Harris as an effort by the deep-pocketed conservative movement to wipe public-employee unions off the map—and to demolish a major source of funding and support for the Democratic Party. “This is an attempted kill shot aimed at public-sector unions,” says Bill Lurye, AFSCME’s general counsel.

The origins of Harris date to July 2003, when the Illinois legislature passed a bill recognizing certain home-care providers as “public employees” and designating a Midwest branch of SEIU to exclusively represent those workers. Before that, these workers were deemed independent contractors with no union representation, even though the Illinois government paid them with federal health-care funds. In June 2009, Gov. Pat Quinn, a Democrat, went one step further. By executive order, Quinn declared the state’s disability-care providers, another type of home-care worker, eligible for exclusive union representation. (Ultimately, the disability providers voted against unionizing.)

When the Illinois labor bill passed in July 2003, no home-care worker was forced into SEIU. But if they chose not to join, the union still was allowed to deduct a small amount of money from their paychecks. Why? It was the union’s responsibility to represent every home-care worker impacted by the new law. To pay for representing union and non-union home-care workers, the union began taking what it calls a “fair share” fee. (This money cannot be used for political activity.) The Supreme Court has upheld a union’s right to collect fair share fees. (This is where so-called right-to-work laws come in. Such laws ban unions from collecting fair share fees from non-union workers even if the employees benefit from union-negotiated contracts.)

Home-care workers, consumers, and advocates in Illinois say union representation has led to higher quality care, safer workplaces, and more stability. Flora Johnson, an 85-year-old home-care worker in Chicago and SEIU member, says union-funded training sessions taught her how to properly lift a person and how to feed patients without choking them. Johnson points out that the union brought a level of professionalism to her industry. “Before we got the union, it was like we was babysitters,” she says. “We had no dignity.”

But there was a backlash. In April 2010, a group of Illinois home-care workers, led by plaintiff Pamela Harris, filed a class action arguing that the state had infringed on their First Amendment rights by forcing them to be represented by a union and pay fees. (The suit named two unions, SEIU and AFSCME, as defendants.) A district court and the US Seventh Court of Appeals each dismissed the case.

The case lay dormant until last October. That’s when, at National Right to Work’s urging, the Supreme Court agreed to hear Harris. Until that point, Harris was narrowly focused on the Illinois home-care workers; it posed no existential threat to the likes of SEIU and AFSCME. But after the high court intervened, National Right-to-Work expanded its argument to threaten all public-employee unions. As SCOTUSblog’s Lyle Denniston wrote, Harris “mushroomed…into a major test of the continuing validity of the Abood precedent.”

Cue organized labor’s freak-out. Abood v. Detroit Board of Education is the 1977 Supreme Court decision that, in effect, upheld the constitutionality of the public-employee union model. The majority in Abood said these unions did not infringe on the First Amendment by collecting representation dues and collectively bargaining on behalf of public workers.

During oral arguments in January, the Obama administration contended that overturning Abood would result in “radically reshaping First Amendment law.” Yet several of the court’s conservative justices appeared to want just that. Writing for the majority in 2012’s Knox v. SEIU, Justice Samuel Alito all but invited National Right to Work to challenge Abood. During the oral arguments in Harris, Alito and Justice Anthony Kennedy seemed eager to demolish Abood. The court’s four liberal justices questioned National Right-to-Work’s arguments at every turn, with Justice Elena Kagan saying that tossing out Abood would lead to a “radical restructuring of the way workplaces are run.” John Roberts, who has used his time as chief justice to push a pro-corporate agenda, gave few hints about where he stood on the fate of public-employee unions.

That leaves Justice Antonin Scalia. A conservative who says he interprets the Constitution through an originalist lens, Scalia would make for a strange ally of organized labor. Yet it was Scalia who asked some of the toughest questions of William Messenger, the lawyer for National Right to Work, challenging Messenger’s argument that public-employee unions are lobbying organizations focused mostly on influencing public policy. Forcing workers to be represented by a lobbying outfit, Messenger argued, infringes on the First Amendment rights of workers who don’t agree with the union’s positions.

Scalia didn’t appear to be buying it. He seemed to lean more toward labor’s argument: that unions exist to better the working conditions of the workers they represent. “Listening to Scalia’s voice in oral arguments made me feel like he really doubted that there was a need to go so far right now,” says Lee Adler, an expert on public-employee unions at Cornell University. “He couldn’t follow National Right to Work’s logic.”

The Supreme Court’s decision in Harris could cut several ways. It could affirm the lower court’s decision—a big loss for National Right-to-Work. It could issue a more narrow opinion, saying, for instance, that Illinois home-care workers aren’t public employees and shouldn’t be unionized without touching Abood. Or the high court could take that kill shot: Eviscerate Abood and gut public-employee unions.

Like many other court watchers, Cornell’s Lee Adler says the fate of Harris—and, potentially, the fate of public-employee unions—rests with Scalia. For the labor movement, Adler says, “He’s the great white hope.”