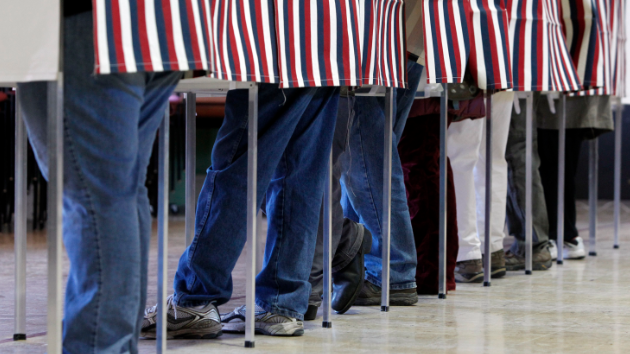 “What kind of shenanigans are going on now?” That’s what Darin Robbins, a Green Party member in Corning, New York, thought when he learned that a stranger had circulated a petition to place his name on the ballot for a House race.

Robbins had no plans to seek office, so he was shocked a couple of weeks ago when a Green Party secretary called to tell him that a petition had been filed in his name to run against GOP Rep. Tom Reed, the vulnerable first-term Republican who represents the 23rd congressional district in upstate New York.

The story gets stranger. A Republican operative was behind the attempt to put Robbins on the ballot. Aaron Andrew Keister, a notary public who has worked as a video tracker for the National Republican Congressional Committee (NRCC), the political committee dedicated to electing GOPers to the House, filed ballot access petitions—each bearing the signatures of about 75 registered voters—for Robbins and a second Green Party member. If Keister’s plan had succeeded, it could have helped Reed—the Northeast regional chairman of the NRCC—by putting on the ballot a progressive candidate who would likely draw votes away from his expected Democratic opponent, county legislator Martha Robertson. But Keister messed up: Because he filed the Robbins petition late and got the other Green Party member’s address wrong, neither Green will appear on the ballot for the June primary or the November general election, according to New York election officials.

Keister, a registered Republican, took advantage of state election rules to try to place the two Greens on the primary ballot in the 23rd district, which includes the cities of Ithaca, Jamestown, and Elmira. In New York, members of small political parties can petition to get on the ballot by collecting the signatures of 5 percent of their party members in the district. These signatures can be gathered by a member of the party, a notary public, or a commissioner of deeds. Because the 23rd district does not have many registered Green Party voters, it only takes 70 Green signatures to put a name on the ballot in the district’s primary election. All Keister had to do was collect the John Hancocks of a few dozen Greens, sign his name at the bottom of each page of signatures, and file the nominating petitions with the state. Under state rules, a nominated candidate can request to take his or her name off the ballot, but only within four days of the filing deadline of April 10. Both of the Green Party members Keister tried to get to run for Congress didn’t find out about the nominating petitions until after that cut-off date. If their petitions hadn’t been ruled invalid for other reasons, they would have appeared on the primary ballot.

Shown a photo of Keister, four of the signatories on the Robbins petition confirmed that the former NRCC contractor was the person who had collected their signatures. Lisa Duggan, a Green who signed the Robbins petition, says Keister “had no literature. He had no idea what this guy [Darin Robbins] stood for. He was very young.” Jennifer Dotson, another Green who signed the petition, says much the same: “He was wearing casual/grungy clothes and seemed nervous, sort of avoided looking directly at me, and wasn’t interested in talking much about the candidate or platform or the party.”

Keister, who resides in Reed’s hometown of Corning, New York, graduated from the State University of New York in Oneonta in 2013 and began working for the NRCC that summer. Between June and December of last year, the NRCC paid Keister $1,300 to serve as a video tracker. The NRCC uses video trackers—usually college students or recent graduates who want to get into politics—to record Democratic candidates at public events, in the hopes of catching a gaffe. Last September, Keister recorded Martha Robertson speaking at a local development agency’s board meeting. Also in attendance were staffers for Reed and the NRCC.

Reed’s campaign says Keister has never been an official staffer for Reed. But a spokeswoman for the campaign would not say whether the campaign is aware of Keister’s effort to put a Green candidate on the ballot. An NRCC spokesman says that Keister was not paid by or affiliated with the NRCC when he was collecting signatures for the Green Party petitions. Keister did not respond to requests for comment.

“It would not surprise me if this [was] an effort to fracture the progressive vote.”

It is legal in New York for residents to circulate a nominating petition for a potential candidate without her permission. However, state courts have ruled in several cases that the party member for whom a petition is filed must grant permission first. “[Keister’s] maneuver shows very little concern, or possibly outright contempt, for democracy,” says Michael O’Neil, co-chair of the New York Green Party.

“It would not surprise me if this [was] an effort to fracture the progressive vote,” says Barry Burden, a professor of political science at the University of Wisconsin, Madison, who specializes in electoral politics. “It is a competitive district, so drawing even a small number of votes away from Robertson could [have] help[ed] ensure Reed’s reelection.”

The race in Reed’s district is going to be tight. The district leans Republican, but Robertson is a competitive candidate. So far, Robertson has raised over $1 million, and Reed has raised $1.9 million.

Republicans have tried in other races to get Greens get on the ballot. In 2010, an Arizona GOP operative recruited homeless people to run as Green Party candidates for several state offices. In 2001, a Republican husband and wife in Washington state helped persuade Green candidates to run for a state House seat and a county council position.

New York’s board of elections will not say whether it is investigating Keister’s actions, or whether a complaint has been filed about the matter. John Conklin, a spokesman for the board, notes, “If a complaint was filed about [potential election misconduct], our enforcement unit would be looking into it.”